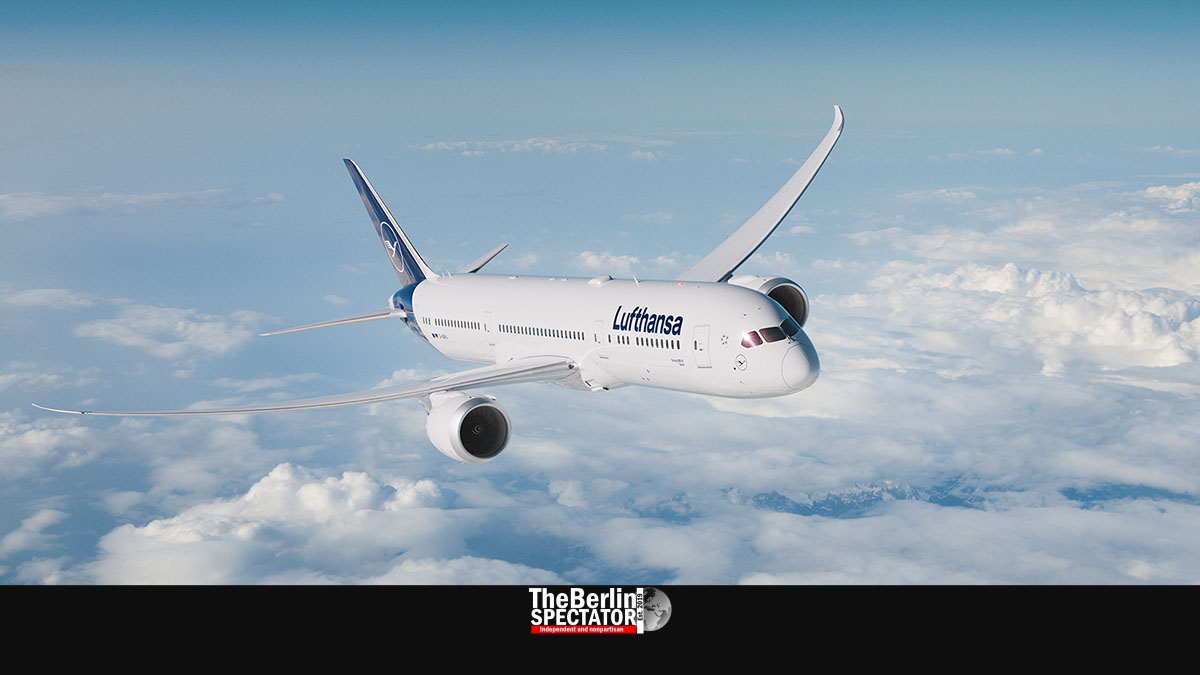 The ‘Berlin’, a sleek Boeing 787-9 with the Lufthansa livery, will be racing through the world’s skies soon. But first, it will have to be certified and delivered. Then, the aircraft’s interior will be installed. Lufthansa ordered quite a few Dreamliners.

Berlin, June 6th, 2022 (The Berlin Spectator) — Aviation is going through a turn of eras. Why would any airline fly four-engine kerosene suckers like the Boeing 747-8i, the Airbus A340 or the A380? There is a far more economical American-made product known as the Dreamliner or the Boeing 787. Maybe they should have called it Nightmareliner instead, because of its significant price of 292.5 million U.S. Dollars (272.86 million Euro or 234.22 million Pounds Sterling). On the other hand, it is a very good plane.

Compared to older models, including two-engine aircraft, it consumes far less jet fuel. The Dreamliner does not need more than 2.5 liters of kerosene per passenger and 100 kilometers, which is about 25 percent less than predecessor aircraft. Its big sister, the 777, uses up its kerosene a lot faster, even though it has the same number of engines. The Dreamliner’s consumption even beats that of cars with combustion engines. Of course, the 787 has more advantages, including inside the cabin.

Lufthansa ordered as many as 32 Dreamliners. The first one, with the tail number D-ABPA, will be delivered this summer. A special aircraft needs a good name, which is why this 787 is the ‘Berlin’. First, the plane needs to be certified by the Federal Aviation Administration (FAA) in the United States. Then, it is supposed to be flown from Everett (Washington State) to Frankfurt, where crews will set up the interior

Boeing 787s are being built for long-distance flights, with their incredible range of 15,372 kilometers (9,552 miles). Still, the ‘Berlin’ will be flown on domestic routes within Germany at first, for training purposes. Once enough crews have the experience they need on this kind of aircraft, intercontinental flights are scheduled to begin. Toronto will be the plane’s first intercontinental destination. By the year 2027, all 32 Dreamliners should be delivered to Lufthansa, according to the purchase contract.

Buying American-made planes is probably a good idea. First of all, the Boeing 787-9 does not seem to have issues, as opposed to the 737-MAX. But there might also be an economical and political reason. The more Boeings European carriers purchase, the more American airlines could choose Airbus products in return. And yes, the European manufacturer does have a comparable model, namely the A350.

Like the 787, the A350 weighs less than older models because it has many parts made of synthetic material. In both cases, the Jet fuel consumption is about 2.5 liters per 100 kilometers and passenger, or 5,400 liters per hour. Both are far more quiet than their predecessor models, and both have modern interiors that create a sense of more space. The number of Airbus A350s Lufthansa is using is supposed to increase to 21 as we speak. At the same time, that of those huge A380 will decrease. The German flag carrier will return a few of them to Airbus.

The Berlin Spectator needs your support. Do we enjoy asking our readers for donations? No. We wish we did not have to, but we do. The truth is that this publication is on shaky ground.
You can support us via Paypal (one-time or monthly donations) or become a patron on Patreon (monthly donations). If you want to, you can read our Donations Page first.
We thank our 15 regular supporters very much. Without you, we would have given up a while ago. But, in order to make The Berlin Spectator a stable project, the support would have to be quintupled to a 4-digit figure.