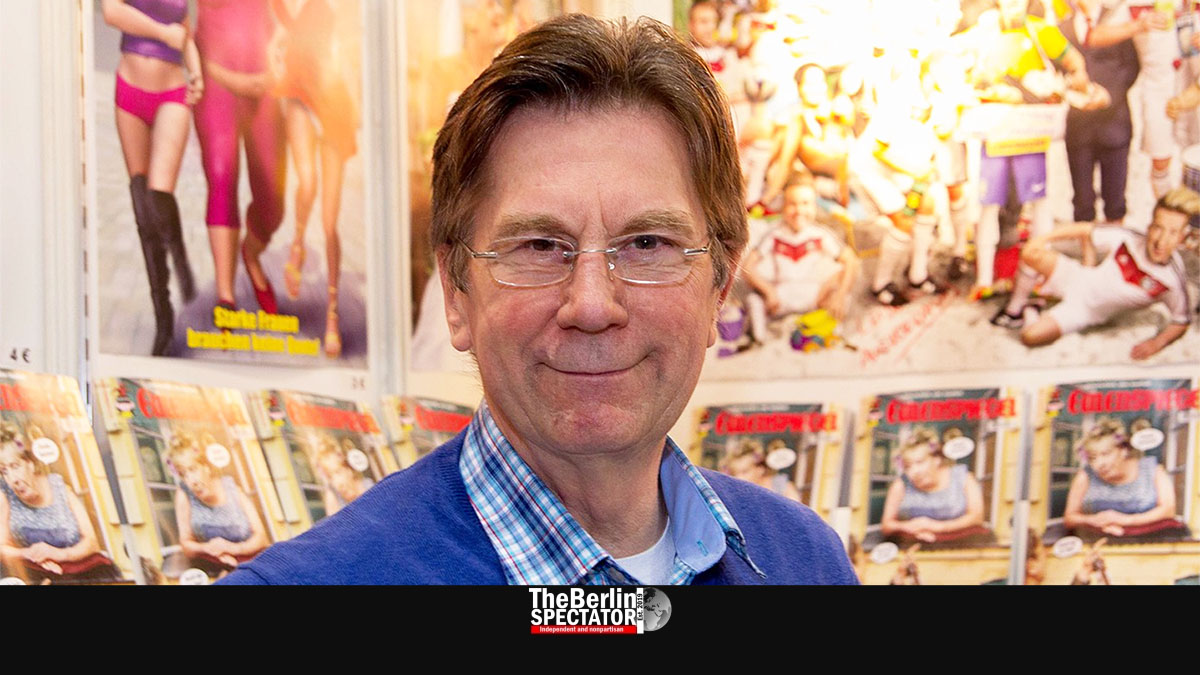 There are movies that make viewers sympathize with criminals and feel relief when they manage to rob banks or escape the police. In real life, these cases are rare. But many Germans felt that way about an extortionist known as Dagobert.

Berlin, June 8th, 2022 (The Berlin Spectator) — Mickey Mouse and Donald Duck are just as popular in Germany as they are in the United States of America, their country of origin. Some characters in those stories have different names in the German-speaking world, including Donald’s rich uncle Scrooge McDuck. This guy, who loves to bathe in cash, is known as Dagobert. Arno Funke, Germany’s most likeable extortionist, picked this name as his alias.

It happened exactly 30 years ago, on June 13th, 1992. At Karstadt, a department store located at Mönckebergstrasse in the heart of Hamburg, a bomb went of. As we know today, the man who placed it there, in order to blackmail the company that owned this branch along with many others all over Germany, was a Berliner. Back then, the police did not have the faintest clue who he was or where he was from.

When it happened, the investigators were dealing with another extortionist whose target was Deutsche Bahn. Because they thought the pipe bomb at Karstadt in Hamburg had been placed there by terrorists, due to a false letter of confession, the Office for the Protection of the Constitution was put on the case. All the police knew for sure, at this moment, was that the explosion had caused a lot of damage.

The next day, things looked very different all of a sudden because the Karstadt extortionist sent a letter to the investigators. It included proof for his claim that he had placed the pipe bomb in the store, and a demand. He wanted 1 million Deutschmarks. The man who was trying to blackmail Karstadt was neither stupid nor a greenhorn.

As it turned out, he had successfully extorted half a million Deutschmarks before, from Hertie, the company that owned the luxury department store KaDeWe at Kurfürstendamm, a famous boulevard in West Berlin. In 1988, Arno Funke’s strategy had been the same. A bomb went off in the store. His demand was a little more modest though. The 500,000 Deutschmarks he wanted were thrown out of a moving ‘S-Bahn’ train by police officers he had instructed accordingly. He managed to grab the cash and disappear.

Since he had been successful once, it would work again. This is what Funke thought when most of the half a million Deutschmarks were gone. Sadly, Arno Funke had depressions and reportedly was close to committing suicide. His assumption was that he would feel better if the second extortion worked out.

On June 14th, 1992, Arno Funke told the police to place an ad in a local daily. The text he demanded was “Dagobert greets his nephews.” This was the moment the German press started calling him Dagobert (Scrooge). In the following weeks, there was a lot to report about in this extortion case. First, two attempts to hand over the cash failed in Mecklenburg-Hither Pomerania and near Hamburg in July and August of 1992.

At this point, Dagobert decided to apply more pressure. Another bomb exploded in a Karstadt store in September of 1992. This time, it hit the city of Bremen. Here, the explosive caused millions of Deutschmarks in damage because the sprinkler system went off. All the water spoiled a lot of the merchandise in the store. Six days later, yet another bomb went off in an elevator at Karstadt in Hanover. This time, two persons were injured slightly.

On many occasions, Dagobert used his intelligence to fool the police. Sometimes, he was just lucky, including on October 29th, 1992. A cop had managed to grab his sleeve after a failed cash handover, but slipped and fell, while the extortionist managed to flee. The next day, German dailies reported the officer had slipped on dog sh*t, which was not really the case. But people liked the story anyway, because the police had been humiliated by this mysterious guy they began to like more and more.

In some articles, Dagobert was even compared to Robin Hood, even though there was quite a difference: Robin Hood gave his loot to the poor, while Dagobert kept his and used it himself. By 1993, he really wanted more money, so he developed a genius idea. He instructed the police to deposit a bag with the cash he had demanded in a road salt box in Berlin’s Britz neighborhood. They did and observed the box for hours and hours.

At some point, they decided to check whether the bag was still in the box. Maybe they should have done so a lot earlier because, as a matter of fact, the cash was gone. The police did not understand how it could have happened, until they moved the road salt box and noticed it had been standing on a manhole cover. Dagobert and the bag were long gone. As he found out, it contained a few Deutschmark bills only, and a lot of paper. He had fooled them, but they had fooled him back.

In late 1993, more bombs exploded. Dagobert was desperate. So, he constructed an electric tipper that was supposed to move on train tracks and bring him the cash the police were instructed to place on it. This idea would probably have worked, if the tipper had not derailed. Again, Dagobert did not get any money. At this point, he was not aware of the fact that he would never get more extortion money from anyone.

April 19th, 1994, was the beginning of the end of Dagobert’s extortion efforts. After yet another failed cash handover, this time in Berlin’s Kreuzberg borough, the police had his number plate which led them to a man by the name of Arno Funke. They observed him. Three days later, they arrested him at a pay phone in Berlin. The moment they put handcuffs on him, he admitted being Dagobert. Somehow he seemed to be relieved they had caught him. In 1995, at his trial, he got nine years of jail time. After five and a half years, in the year 2000, he was released.

The more statements Arno Funke made on TV, and the more the nation learned about him through other sources, the more he became the most likeable extortionist ever. Most Germans were sure this man would not hurt a fly, even though two persons were injured when one off his bombs went off.

Since his release, Arno Funke has released an autobiography and a book with caricatures. He also took part in TV sitcoms. In a British reality TV show about the extortion case, he played himself. For the satiric magazine ‘Eulenspiegel’, he is a cartoonist until today. While doing time in the 1990s, Funke was in therapy. His depressions are gone.

Main photo at top of page by Ch. Grube (license)