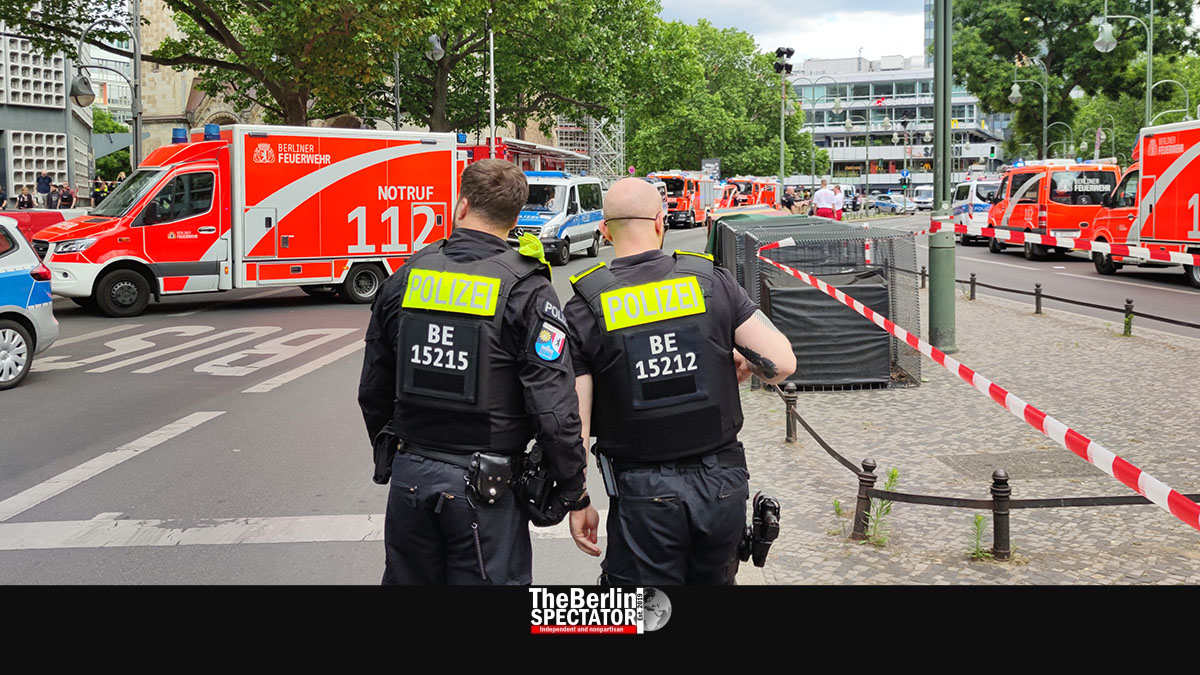 In Berlin, a motorist drove into a crowd of people at Breitscheidplatz square in the western city center. One woman died at the scene. The condition of several victims is life-threatening.

Berlin, June 8th, 2022. Update: June 9th, 2022, 8:57 a.m. CEDT (The Berlin Spectator) — It happened on Wednesday morning at 10:26 a.m. CEDT. At the intersection of Rankestrasse and Tauentzienstrasse, right next to Breitscheidplatz in the German capital’s Charlottenburg borough, a 29-year-old man drove right into a crowd on the sidewalk with his car. A woman was killed. She was a teacher from the federal state of Hesse.

For the Berlin Fire Department, a spokesman said six people had sustained life-threatening injuries, three persons relatively serious ones and several individuals had been injured slightly. Twelve of the tenth-graders the teacher was on a class trip with are among the injured.

After the incident, passers-by prevented the driver from leaving the scene until the police arrived and arrested him. A police spokesman told The Berlin Spectator some colleagues of his had been close by when it had happened. Heavily armed officers were still there in the afternoon. More than 100 medics and other helpers were present. A rescue helicopter landed on the square while another was circling the area.

In the late afternoon, Berlin’s Governing Mayor Franziska Giffey arrived at the scene of the incident. She said she was shocked, also because memories of the attack of 2016 had returned. Only a few steps away, on Breitscheidplatz, an Islamist terror attack took place at a Christmas market in December of 2016. Twelve people were killed, when the attacker drove into a crowd with a big truck he had stolen after murdering its driver. On Thursday morning, Mrs. Giffey said Wednesday had been “a dark day in Berlin’s history”.

In the late evening, Chancellor Olaf Scholz commented on the deadly incident that happened on Wednesday. He said he was shocked. The next of kin of the woman who had been killed and the injured, including many children, were “in our thoughts”.

At first, the police had said it was unclear whether the incident had been an accident or a deliberate attack. German media reports about a claim of responsibility in the form of a letter turned out to be wrong. There did not seem to be a political motivation, but the perpetrator may have had psychological issues. He was questioned on Wednesday. The man is both German and Armenian and was driving a small Renault. The vehicle ended up in the window of a Douglas perfume shop.

After the deadly incident, the police started cordoning off the area. For a long time, the teacher’s body was left on the street, hidden behind police vans, as officers collected evidence. Nobody else was allowed to approach the location. Shortly after 2:00 p.m. the body was taken away. At the same time, the ‘U-Bahn’ trains in the area were not allowed to stop at Kurfürstendamm and other stations in the area.

Many shops and restaurants in the area were closed. Employees were not allowed to enter their work places. In the afternoon, hours after the incident, cops suddenly entered a McDonald’s restaurant and closed it. Their colleagues even looked for explosives, just in case.

The Berlin Police Department is looking for witnesses who may have filmed or photographed the attack or accident. Pictures or video footage can be uploaded to the police server here.