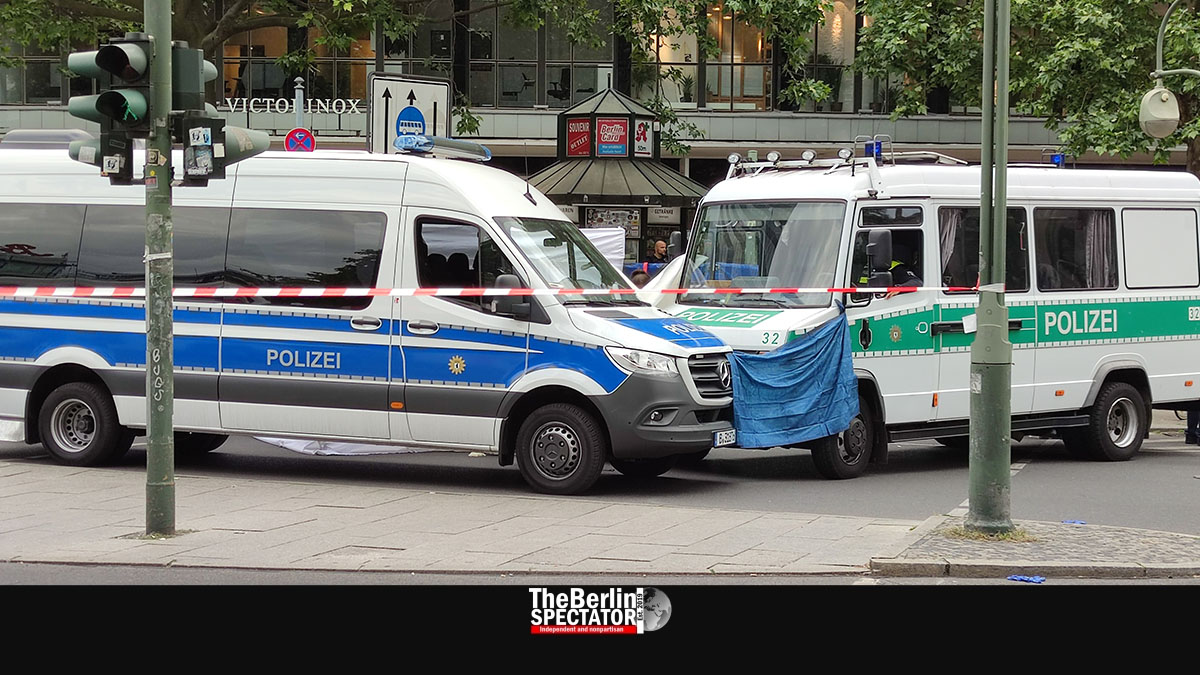 A day after a tragic incident in Berlin’s Charlottenburg borough, in which a teacher was killed in front of her students, the Police Department and the Prosecution released a statement on the matter. The perpetrator seems to be psychologically challenged. But, at least for now, this is being treated as a murder case.

Berlin, June 9th, 2022. Update 2:52 p.m. CEDT (The Berlin Spectator) — Berlin’s Police Department and the Berlin Prosecution called yesterday’s deadly incident a “tragic event” in a statement released on Thursday in the early afternoon. They confirmed the death of a woman. Several persons were badly injured, when a 29-year-old man drove his car into a crowd on a sidewalk in the German capital’s western city center on Wednesday.

The motorist drove westward on Kurfürstendamm, one of Berlin’s most famous boulevards. Suddenly, he steered the car onto the sidewalk, where he hit several pedestrians. Seconds later, he was back on the street and crashed into a shop window afterwards. On the way there, he hit more people and another car. Witnesses made sure the man could not leave by holding him until the police came and arrested him.

According to today’s statement, medics and doctors sent by the Fire Department rushed to the scene of the incident and treated the injured. But a teacher from Hesse was injured so badly she died on site, right in front of a colleague of hers, who was injured badly, and 24 tenth-graders she was on a class trip with. Seven of them were severely injured while another seven sustained minor injuries. The helpers also treated seventeen more injured persons while fifty people who witnessed the incident got psychological help.

Investigation Continues in All Directions

The Police Department and the Prosecution also said the 29-year-old man had been driving his sister’s vehicle. On Wednesday, he was treated at a hospital, where he was being guarded by officers. Later, he was taken to the detective squad for questioning. At the same time, the vehicle was examined by specialists who secured the evidence.

Right after the deadly incident took place, the homicide division started collecting evidence as well. The detectives also spoke to witnesses in cooperation with the prosecutor on duty. Even though everything points towards an act committed by a psychologically challenged person, the investigation was continuing in all directions, the statement said.

At a press conference on Thursday afternoon, Sebastian Büchner of the Berlin Prosecution stated the charges against the suspected perpetrator included murder in one case and attempted murder in 31 cases. He said his authority wanted to send the man to a psychiatric hospital.

Apparently, the schoolkids and their teacher, one of whom died, were at the wrong place at the wrong time. Any pedestrians could have become the perpetrator’s victims, had they been there at that very moment.