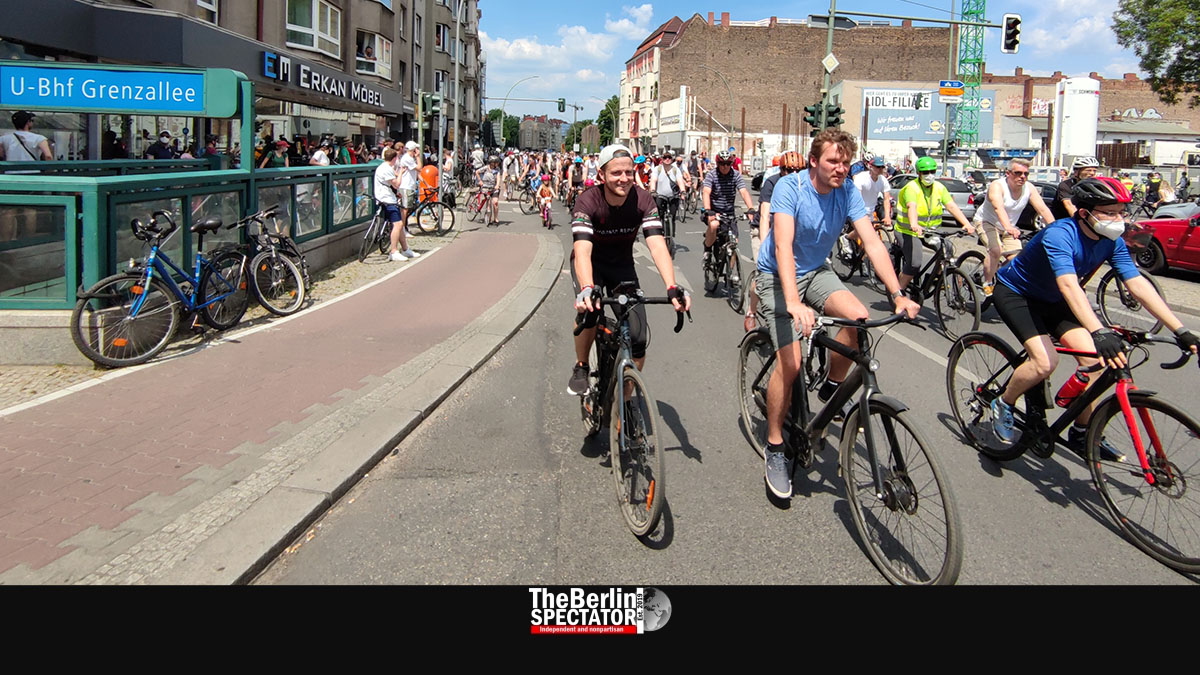 In Berlin, the German Cyclists Association’s annual bicycle protest will be taking place on Sunday. All over the city, cyclists intend to take over the German capital’s main traffic arteries and gather at the Victory Column in the early afternoon.

Berlin, June 11th, 2022. Update: 5:51 p.m. CEDT (The Berlin Spectator) — Motorized traffic will definitely not run smoothly on Sunday, June 12th, 2022. That is because cyclists will be taking over Berlin. Tens of thousands are expected to take part in the annual bicycle protest for an accelerated mobility transition.

The protesters will be joining the rally at countless starting points all over Berlin and in neighboring Brandenburg. Via a total of 18 routes they are supposed to reach Strasse des 17. Juni between the Victory Column and Brandenburg Gate at about 2:00 p.m. CEDT. An ‘Environment Festival’ will be taking place at the location on Sunday afternoon. The bicycle protest’s motto is “Hop on the bike – Implement the mobility transition now”.

All routes even include Autobahn stretches. Both the A100 and the A115 will be closed to motorized traffic because the cyclists are taking over here too. Most environmentalists in Berlin oppose the planned completion of the A100, which is why riding bikes on this particular Autobahn is some kind of a symbolic act that is important to them.

The organization behind the annual bicycle rally is the German Cyclists Association (ADFC). In a statement it released it said a special aspect about the rally was the possibility to join at many locations all over Berlin. There is one much shorter route for parents with smaller children on bikes. It commences at Jannowitzbrücke station and continues via Moritzplatz square to the Victory Column.

According to the AFDC, many “bicycle fans” from all over Germany will arrive at the starting points outside the city, in Brandenburg province, by train in order to take part in the protest as well. “Once a year, we take over the space which is usually being eaten up by cars”, the organization says. “While we even have to share Berlin’s bicycle streets with cars, the Autobahnen (plural) are reserved for motorized traffic only. That is why we want to fight for improved conditions for bicycle traffic on those two Autobahnen.”

Some participants intend to start riding towards Berlin on Saturday night from other cities in eastern Germany and even Poland, in order to get to Berlin in the morning. There are official approach routes than start in Szczecin (Poland), in Leipzig, Dessau and Frankfurt (Oder). All routes and starting points can be found on this pdf document provided by the ADFC.

Since most of Berlin will be closed to motorized traffic, residents and visitors should use the ‘U-Bahn’ or ‘S-Bahn’ trains. Many of the German capital’s tram and bus lines will be affected by the protest too.

Berlin After the Latest Attack on Pedestrians: How Useful are Local Safety Measures?