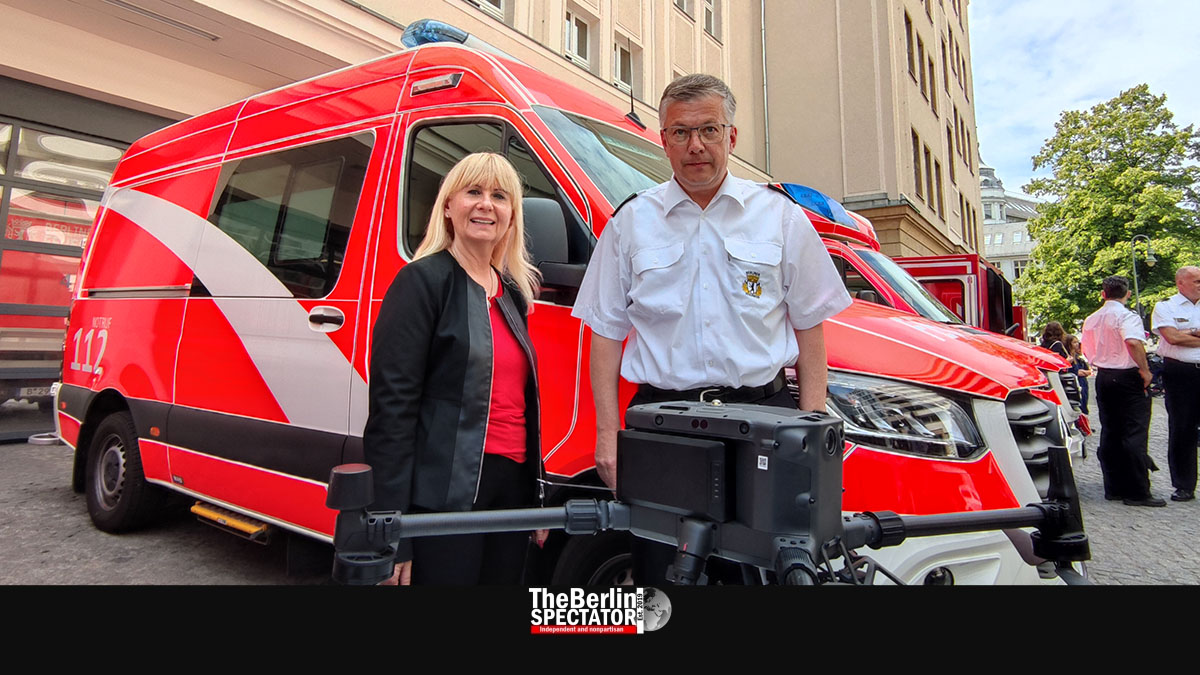 The Berlin Fire Department’s fire fighters, medics and other employees managed to cover a huge work load consisting of exactly 492,226 operations in 2021. Calls came in every few seconds. Yes, the Department is successful, but there are issues it will have to resolve.

Berlin, June 16th, 2022 (The Berlin Spectator) — Being a medic or a fire fighter in Berlin is definitely interesting, but challenging. First of all, the number of operations increased. Also because the Corona pandemic made things difficult in several ways, the Berlin Fire Department’s staff was extremely busy. On average, its members were called to operations every 64 seconds, throughout 2021.

Interior Senator Iris Spranger and Fire Chief Karsten Homrighausen (see photo at top of page) released their annual report today. On 242 pages, it contains many numbers most of which are surprisingly high. While that of fires decreased by 19.4 percent, the number of rescue operations rose by 6.9 percent. Every 29 seconds, calls were answered at the control center. Every 4 minutes and 40 seconds, an emergency doctor had to be rushed to a patient. September of 2021 was the most difficult month, with 1,486 operations per day, on average. In January, the easiest month, there were 1,176.

Berlin’s Fire Department has to respond to all kinds of emergencies, including fires, accidents and medical emergencies. Without the Volunteer Fire Departments, it would not have managed to do it all. The Department also has seven partners. They run the two rescue helicopters Berlin has, ambulances and intensive care vehicles.

A total of 4,420 employees are part of the Fire Department. Some 3,000 of them are part of operations. There is a problem: In the next seven years, 1,500 employees will become pensioners, meaning new hires are badly needed. According to Fire Chief Homrighausen, the goal is to hire 500 people per year. At this stage, this level has not nearly been reached.

“The report for 2021 shows what the full-time employees and the volunteers achieve every single day”, Iris Spranger stated. “Berlin needs a strong and modern Fire Department.” She promised more personnel and funds for a modernization. The Interior Senator also conceded the Berlin Fire Department had a lot to catch up on in regard to equality. In the administration, the share of women is 21.2 percent. It gets a lot worse: Only 2.7 percent of all members of the emergency personnel are female.

In the city state of Berlin, the Fire Department is dealing with extremism in its own ranks. Employees are being educated in this regard. In May of last year, a Coordinator Against Extremism was appointed. Diversity is being appreciated. “During operations, it does not matter what social, cultural, religious or national origin, gender or sexual orientation the needy have”, the Department says.

Senator Iris Spranger said there was one aspect that made her angry. More and more firefighters and medics are attacked while they try to help. This development is worrisome indeed. In 2021, six attacks by individuals with weapons took place, 18 attacks by persons who were holding “dangerous items”, and 67 attacks by people without weapons. In many cases, staff members were threatened or offended, or both.