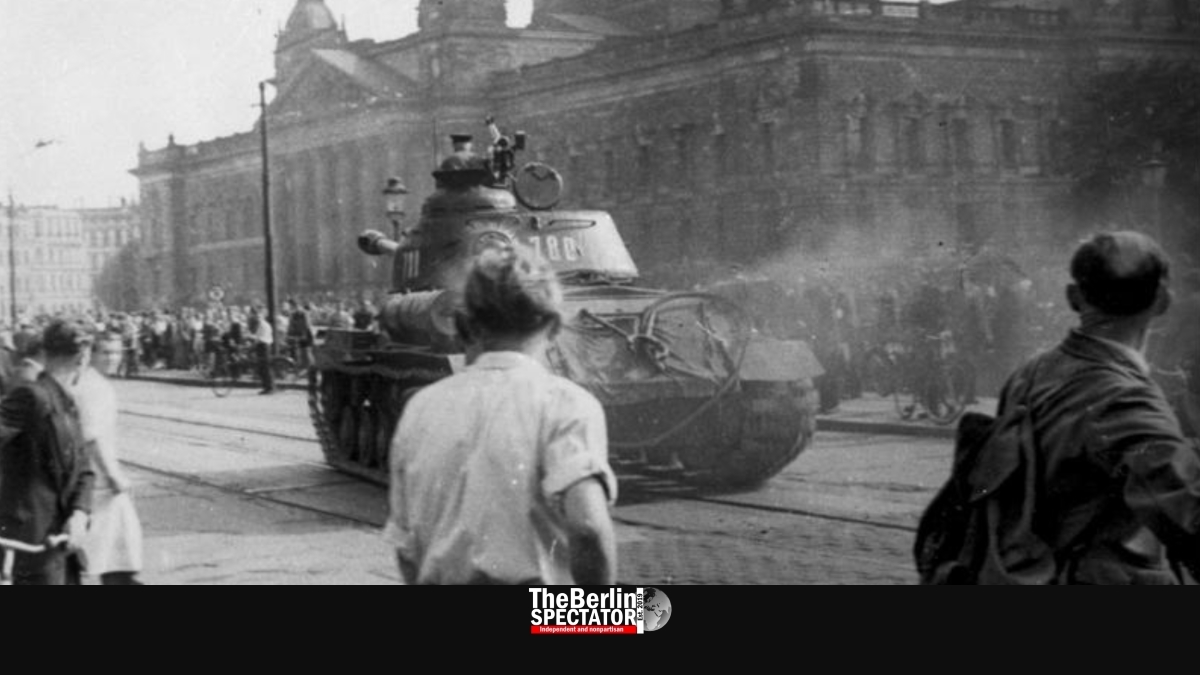 The participants of the uprising of June 17th, 1953, and the victims of its suppression will be commemorated today. Berlin’s Governing Mayor Franziska Giffey said workers from Berlin and Brandenburg had initiated the protests back then. Freedom needed to be defended over and over again.

Berlin, June 16th, 2022 (The Berlin Spectator) — Sixty-nine years ago today, on June 17th, 1953, citizens of the communist ‘German Democratic Republic’ (GDR) staged walkouts and protests against the state’s regime. The uprising was crushed by the Soviet Army. Dozens of protesters and uninvolved spectators died. So did five security officers.

The participants rejected the kind of socialist system the GDR’s leadership was setting up after being ordered to do so by Moscow. It was the so-called ‘Sovietization’ of their state. Before the protests, farmers and business owners had been pressured to turn over their property to the state.

The police got more powers while military spending increased. Due to several mistakes the leadership of the ‘Socialist Unity Party of Germany’ (SED) was responsible for, the food supply for the GDR’s citizens was not secured.

Due to the shortage of fruit, meat and other kinds of food, GDR citizens had to wait in long lines on a regular basis, in order to get the food they needed. At the same time, representatives of the churches were jailed. The ongoing dispossession wave did not make the citizens happy either. Nor did the fact that the economic problems in the communist state increased further.

In the morning of June 17th, 1953, workers at factories all over the GDR started a strike. Big protests took place in the centers of the state’s larger cities, smaller ones in hundreds of towns and villages. Some city halls and police stations were occupied by protesters. In the town of Gera, even a jail controlled by the infamous State Security was invaded. Street battles between protesters and police took place in East Berlin.

Anywhere between 400,000 and 1.5 million GDR citizens participated in the protests. Historians have not been able to establish the exact number.

On this day, the GDR’s leadership was protected by the Soviets. The latter declared a state of martial law in the early afternoon. Sixteen Soviet Army divisions came in. When the tanks arrived, the protests ended in many areas. Both the Soviets and the infamous State Security started arresting people they called provocateurs.

In commemoration of the victims on the day of the uprising, the old Federal Republic of Germany (West Germany) observed an official annual holiday on June 17th, until the reunification of Germany took place in 1990. But the date is still a memorial day.

On the eve of this day, Franziska Giffey commented on the uprising of June 17th, 1953. The strike movement which had led to the uprising against the GDR regime had been initiated by workers from Berlin and Brandenburg, she said. Back then, they had demanded an improvement of their living conditions, the release of political prisoners, a resignation of the government, free elections and Germany’s reunification.

In the end, Soviet tanks had crushed the movement in Berlin’s city center using brutal force, Mrs. Giffey said. This had been the first time a liberation movement had challenged a communist government. In 1961, the construction of the Berlin Wall had been the answer to those events. The Governing Mayor stated all of this showed that freedom needed to be fought for, over and over again.

“In the light of our history, we think of the Russian war of aggression against Ukraine”, Franziska Giffey said. “This is about the values of June 17th as well. In Ukraine, people are sacrificing their lives for them. We are commemorating the dead from the democracy movement in our city and our country.” The Governing Mayor was going to take part in two commemoration events today, one at Berlin’s Square of the German Uprising of 1953, located next to the Finance Ministry at Leipziger Strasse, and the other one at Seestrasse Cemetery.

Germany: Intense Heatwave to Hit this Weekend, with Temperatures of up to 37 Degrees Centigrade