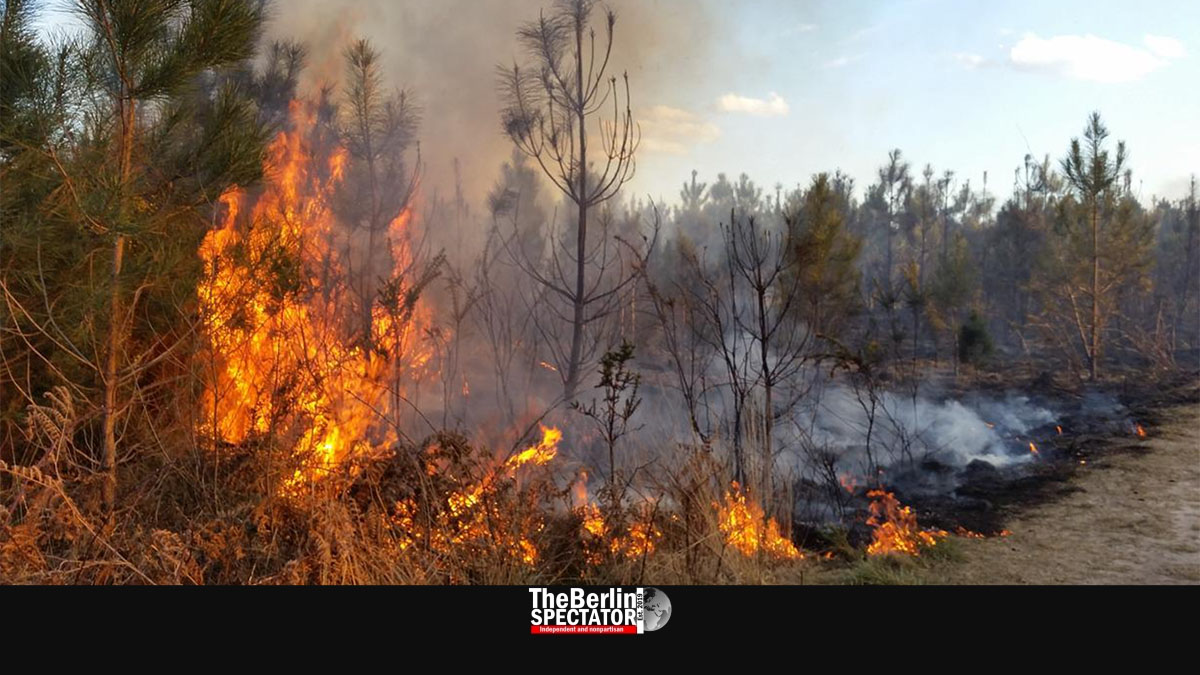 The European heatwave that hit Germany will be felt on Sunday as well. Especially elderly people and chronically ill persons were advised to be cautious. On Saturday, at least four forest fires were reported.

Berlin, June 19th, 2022 (The Berlin Spectator) — In Germany, the health authorities warned people of sunburn, dehydration, hay fever and circulation problems that could be caused by the excessive heat that hit most of Germany on Friday and Saturday. In some areas, the temperatures reached 37 degrees Centigrade (99 degrees Fahrenheit).

Residents were warned not to engage in sports activities outdoors. Staying indoors or in the shade and drinking plenty of water were part of the advice Germans and residents of other nationalities got. Especially elderly people and the chronically ill were affected by the dangers the heat posed. Parents of small children were advised to watch their little ones closely, to make sure they drank enough and limited their activity in the heat.

All over the country, including in Berlin, the temperatures made walking or cycling difficult. On the streets of the capital, hardly any cyclists were seen on Saturday afternoon. Today, on Sunday, June 19th, 2022, the heat was supposed to increase further. For Berlin, the forecast was corrected from 37 to 35 degrees Centigrade (95 degrees Fahrenheit). Frankfurt am Main had to expect 37 degrees C (99 degrees F), Stuttgart and Freiburg will nearly reach this level as well. Only for Hamburg and the rest of Germany’s northwestern corner, cool weather was forecast. This is where temperatures were not supposed to exceed 20 degrees C (68 degrees F).

The biggest problems popped up in Baden-Württemberg, Brandenburg and other states. This was where forest fires kept firefighters busy. Near Stuttgart, they spent hours extinguishing one of them. It was caused by an “uncontrolled bonfire” in a forest, the local authorities said. The police are on the case. In Saxen-Anhalt’s Harz mountains, forest fires needed to be fought as well. It happened near the town of Ballenstedt. More fires of this kind were reported in the federal state of Hesse.

In Brandenburg, the area around Treuenbrietzen located some 73 kilometers (45 miles) southwest of Berlin was affected by a large forest fire on Friday. By Saturday afternoon, fire fighters managed to extinguish the flames, but they flared up again in the evening. While the local fire department prepared for an evacuation of part of Treuenbrietzen, just in case, the Air Force was called in. Soldiers in a helicopter that can carry 5,000 liters (1,321 gallons) of water supported the local firefighters during a big operation that lasted into the night.

While tens of thousands of people spent the day in Germany’s public outdoor swimming pools, the meteorologists at the German Weather Service did not. They spread good news on Saturday evening: Germany’s latest heat record for the month of June was not broken on Saturday. It would have, if the temperatures had exceeded 38 degrees C (100 degrees F). They didn’t.