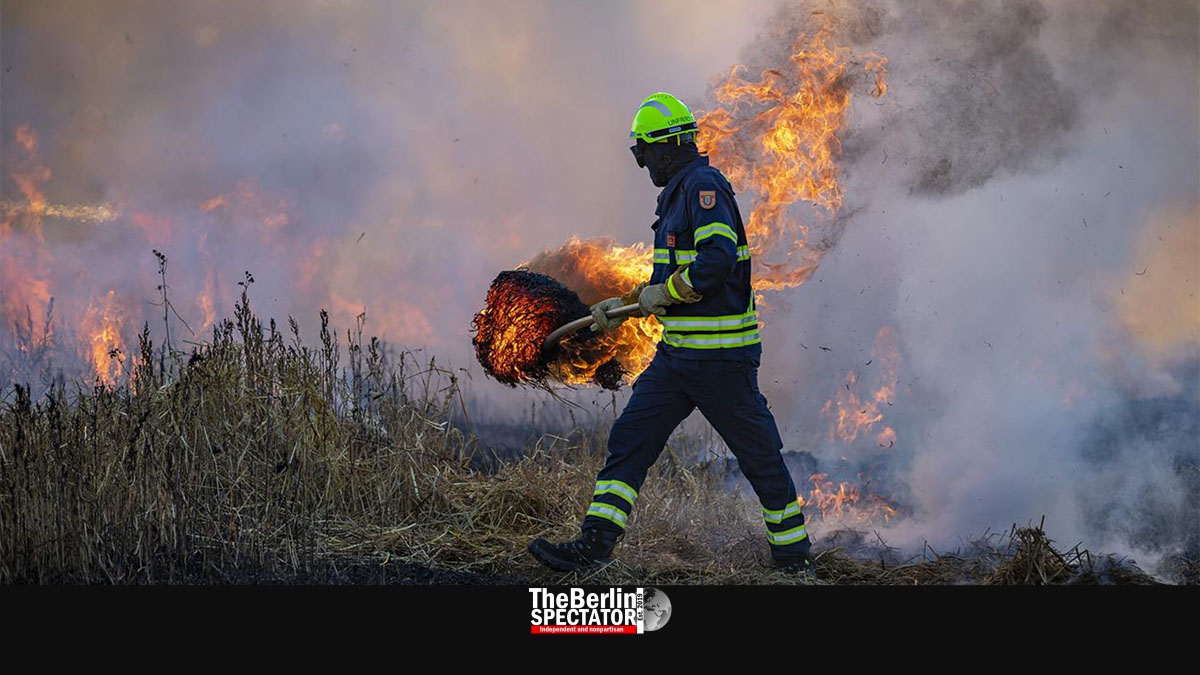 In Brandenburg, two forest fires destroyed countless trees and endangered towns this past weekend. On Sunday, some residents in Beelitz needed to be evacuated. The Berlin Fire Department is helping the colleagues in the neighboring state.

Berlin, June 20th, 2022 (The Berlin Spectator) — Germany’s armed forces were supposed to help fire fighters around the Brandenburgian town of Beelitz with an armored recovery vehicle that can be used to cut swaths into the woods. The Berlin Fire Department got an urgent request for help as well. On Sunday the late evening, it sent 30 fire fighters to Beelitz in several vehicles. This is where the largest forest fire was burning. A drone team was part of the operation as well.

On Sunday afternoon, three streets on the outskirts of the town of Beelitz were evacuated because the fires were coming closer and closer. Residents in several other streets were ordered to prepare for evacuations as well, as a precaution. Deutsche Bahn stopped all trains on an important route close to Beelitz due to the dangers the fires were posing to them. Not so far away from the train tracks, old ammunition stored in the area reportedly exploded.

Then, there was hope. At some point last night, the situation improved to some extent thanks to a thunderstorm and some rainfall in the region. Later, the Mayor of Beelitz, Bernhard Knuth, said the fire was under control, but not extinguished. He stated he was hoping more showers that had been forecast after 8:00 a.m. CEDT would have a positive effect.

On Sunday, before the rain, up to 200 hectare of forest were on fire. About 1,000 relief forces were on duty in and around Beelitz, a town of some 12,000 inhabitants. With its old sanatoriums and its Treetop Path, it has become a major tourist magnet over the years.

Shortly after midnight, Beelitz municipality announced the situation was “stable”, but added there was no all-clear. At least the many firefighters had been able to prevent the fires from spreading further. Winds that could stoke up the fires again were the biggest danger at this stage. More problems were expected in case the rain that had been forecast for the morning failed to appear.

Another forest fire was fought in the area around Treuenbrietzen, another Brandenburgian town. The excessive heat (and, in at least one case, careless individuals) also caused fires in Baden-Württemberg, Hesse and Saxony-Anhalt. The past two days were the hottest of the year, so far. In some regions, the temperatures reached 37 degrees Centigrade (99 degrees Fahrenheit).