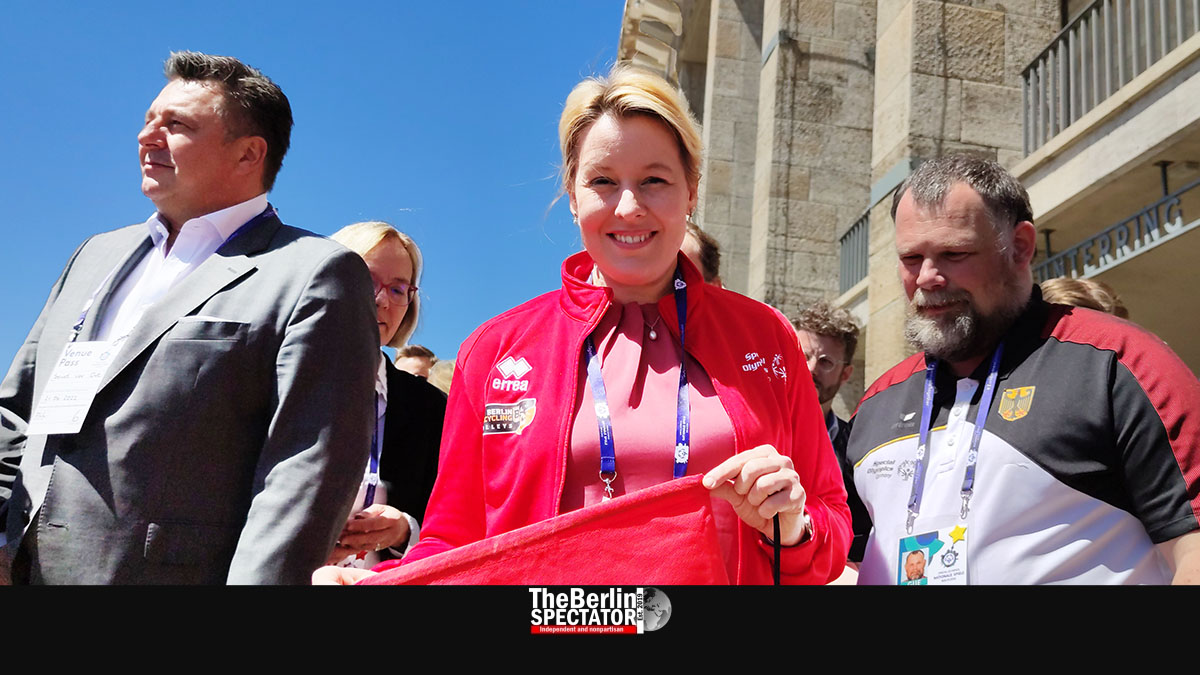 There is so much going on in Berlin. In some cases, events do not get the attention they deserve. That is why Governing Mayor Franziska Giffey met participants of the Special Olympics today.

Berlin, June 21st, 2022 (The Berlin Spectator) — There are three events in the world that are allowed to use the word Olympic in their name. They are the Olympic Games, the Olympic Winter Games and the Special Olympics. The latter are the world’s largest sports event for people with mental or physical challenges. Right now, the German version is taking place right here in Berlin.

Motorists may have noticed the fact that the area around Brandenburg Gate is closed to traffic, including Strasse des 17. Juni. This has to do with the competitions of the Special Olympics. This morning at around 10:00 a.m., a group of athletes started one of them on the western side of the Gate, but apart from the participants themselves and their loved ones, hardly anyone noticed.

Some three miles further west, it was different. At Berlin’s Olympic Stadium, the Berlin Senate convened today. Governing Mayor Franziska Giffey, Interior Senator Iris Spranger, all other Senators and some State Secretaries greeted some of the 4,000 national Special Olympics athletes who are trying to qualify for the World Special Olympics that will take place in Berlin as well, in 2023.

“We will use those games in order to give inclusive sports a boost”, Mrs. Giffey stated. She announced Berlin would invest into an approved accessibility at the city state’s sports facilities. “The Senate supports Berlin as an inclusive city”, the Mayor said. Two inclusive gymnasiums per district are the goal. Berlin has twelve districts.

While the Governing Mayor, the Senate and the athletes were busy, countless musicians prepared for another big event that commenced this afternoon at 4:00 p.m. CEDT, namely the Fête de la Musique. It includes countless little concerts all over the city, by solo artists, duets and bands. In a way, there is a Fête de la Musique in Berlin all the time, as long as Corona does not stop culture. The Culture Summer Festival is taking place all summer long. Today, there is yet another festival.

The Fête de la Musique was going to be kicked off at the Gemeinschaftshaus Gropiusstadt on Tuesday afternoon. “Here, acts and bands from various musical genres and diverse backgrounds will perform with free admission, highlighting the character of Fête de la Musique as an inclusive, communal cultural experience for all”, the official announcement read. “This evening marks the 40th anniversary of Fête de la Musique, which originated in 1982.”

More information on the Fête de la Musique can be found here. The website for Germany’s Special Olympics is here.