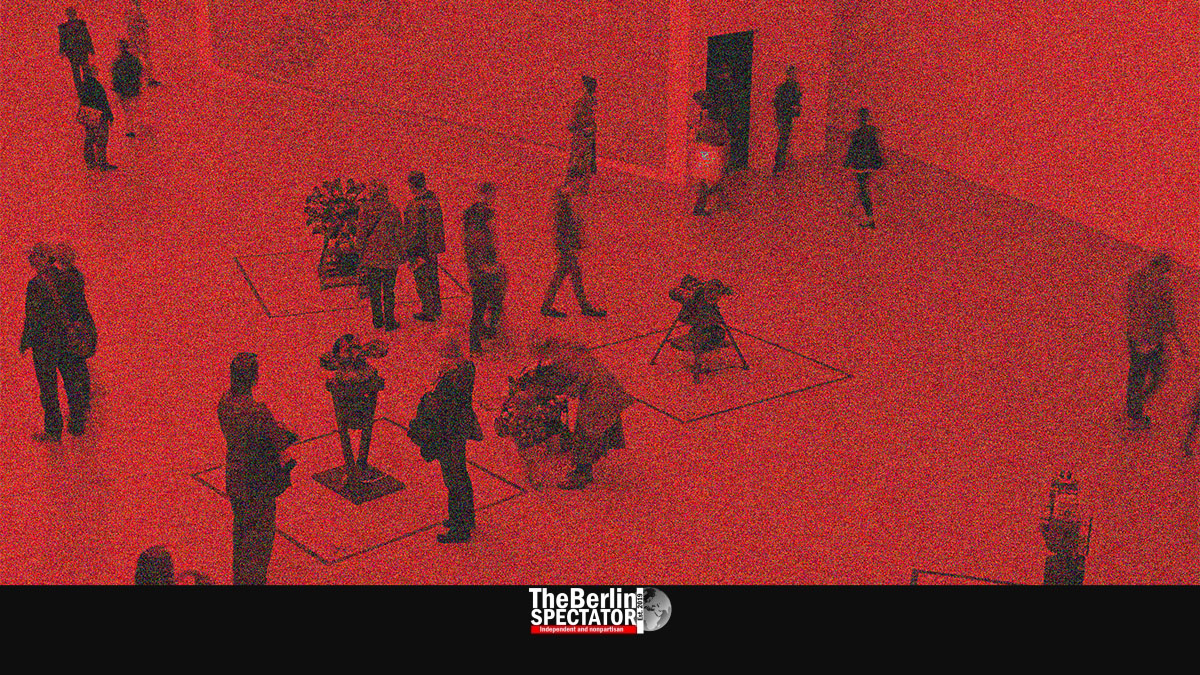 In Kassel, the Documenta just commenced. Prior to the event, the absence of Israeli artists at the modern art exhibition and antisemitic tendencies had been criticized. Now, paintings with antisemitic elements were exhibited.

Berlin, June 21st, 2022. Update: 3:49 p.m. CEDT (The Berlin Spectator) — In many countries on this planet, there is no escaping Jew hatred. They include the Federal Republic of Germany, the free and democratic successor state of Nazi Germany, in which the most terrible form of antisemitism was among the leadership’s main policies and led to the murder of 6 million Jews. In spite of this most terrible part of Germany’s recent history, and even though there had been discussions about antisemitic approaches ahead of the exhibition’s opening, the Documenta in Kassel just displayed paintings with antisemitic motives.

Only 77 years after the Allies liberated the few survivors in the Nazi death camps, and defeated fascism in Europe, antisemitism is on the rise again. It comes in different forms. The far-right’s blind hatred against Jews does not surprise anyone. On the far-left, Jew hatred is often disguised as criticism of Israel. Among antisemites, the spread of conspiracy theories about the only predominantly Jewish country in the world is popular as well. Radical groups from within Germany’s large Muslim community spread antisemitic terror propaganda on the streets of Berlin and in other cities on a regular basis. The BDS movement supports those approaches, also by inviting Palestinian terrorists to speak at events in the Federal Republic.

Three years ago, the Berlin Bundestag distanced itself from BDS and its antisemitic approach. One and a half years later, a group of cultural managers signed a statement in which they said they were worried the parliament’s condemnation of the movement would “edge aside important voices and outline critical positions in a distorted way”, meaning they supported BDS at least partially. The signatories included the directors of the Goethe Institute and many renown cultural institutions in Berlin and elsewhere. The statement raised questions. Could there be an antisemitism problem in the German art world?

Another one and a half years later, last Saturday, the fifteenth edition of the Documenta commenced. Weeks before, a discussion about problematic tendencies and the involvement of BDS sympathizers had started. The modern art exhibition had invited a Palestinian collective with ties to a suspicious ‘cultural center’ named after an anti-Zionist. It organized an event entitled “We Need to Talk” which was supposed to be about antisemitism and other forms of hatred, but did not include any representatives of Jewish organizations.

Back then, the Documenta rejected the accusation of antisemitism and released a statement that sounded like one of support for the strange BDS declaration signed by all of those culture managers in 2020. But the event was cancelled after the Central Council of Jews in Germany criticized the approach it was taking.

Germany’s President Frank-Walter Steinmeier went to Kassel on Saturday for the Documenta’s official opening: “Where criticism of Israel shifts into challenging its existence, a line is crossed”, he stated. Steinmeier was so angry he even said he had not been sure he was going to come to Kassel at all. At this point, at the very latest, the Documenta and the politicians in charge of the state-sponsored event should have been extremely careful about any antisemitic aspects. But they were not.

Two paintings led to the next scandal. One one of them, by a Palestinian artist, reportedly shows the Spanish town of Guernica, which was flattened by Nazi Germany’s bombers in 1937, combined with Israeli anti-terror operations. The other painting, a huge one by the Indonesian artist group Taring Padi that was displayed at Kassel’s Friedrichsplatz square, contains figures clearly marked as Jews that had pig faces and vampire teeth, in a style that would definitely have made it into the “Stürmer”, a Nazi propaganda publication printed in the Third Reich.

Even after this latest scandal, neither the Documenta nor the Indonesian collective seemed to want to see any issue. But, on Monday, the big painting was covered because of the criticism. The Documenta’s Director Sabine Schormann released a statement in which she stressed the painting had not been made for Kassel, but for earlier events elsewhere in the world. She also said everyone involved regretted feelings had been hurt and vowed the Documenta would now “get external expertise”.

The latter had already been delivered before the antisemitic painting was covered, by Josef Schuster, the President of the Central Council of Jews. In spite of the fact that the Documenta had guaranteed there would not be antisemitism in the exhibition, it had become clear that a serious examination of the subject had not taken place, he told the publication “Jüdische Allgemeine”.

Volker Beck, the new President of the German-Israeli Association (DIG), announced he had sued the Documenta because of its antisemitic portrayals. Katharina von Schnurbein, the European Commission’s Coordinator on Combatting Antisemitism, criticized the Documenta too. So did the Israeli Embassy in Berlin. It released a statement that said some of the exhibits reminded it of “propaganda by Goebbels and his henchmen in the dark times of Germany’s history”.

The American Jewish Committee in Berlin demanded the dismissal of Sabine Schormann as the Documenta’s President. In Hesse, which includes Kassel, the city which hosts the Documenta, the federal state’s Coordinator for the Fight Against Antisemitism, Uwe Becker, said the motives Taring Padi had chosen did not permit any interpretation. They obviously were antisemitic. By now, even Hesse’s Art Minister Angela Dorn and Germany’s State Secretary for Culture, Claudia Roth, who had brushed aside earlier complaints, criticized the collective’s painting.