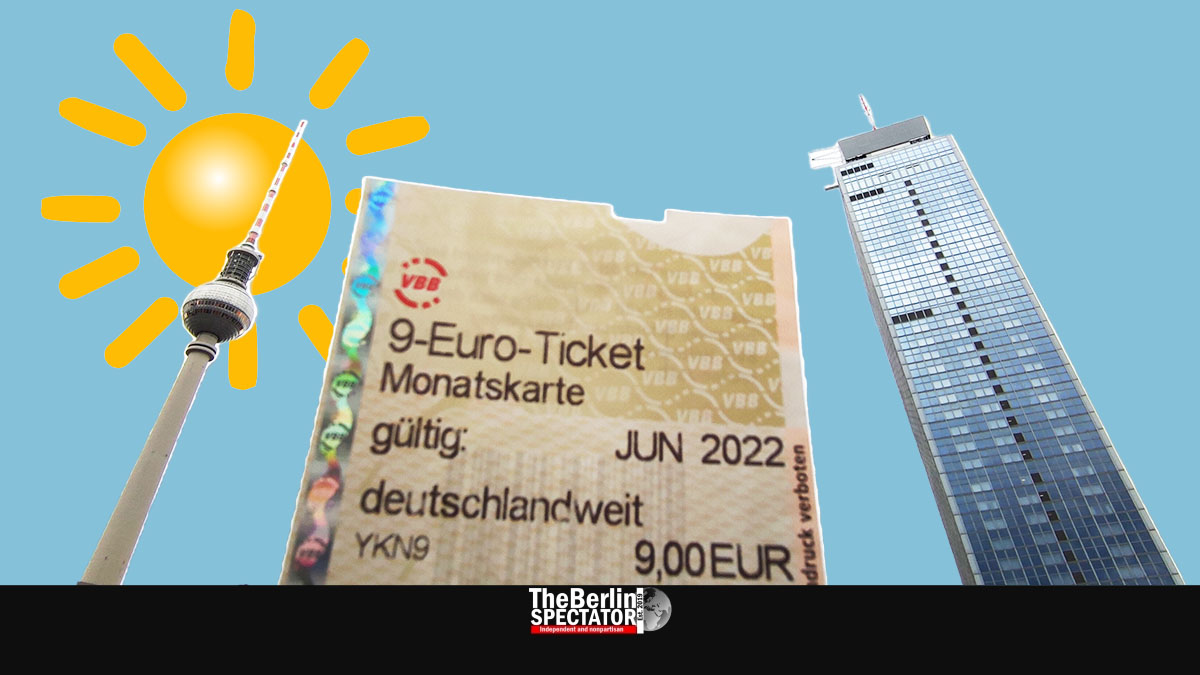 Berlin has a bestseller. While the German capital’s residents and visitors buy and consume some 70 million portions of Currywurst per year, the 9 Euro Ticket only reached the second place. But that is pretty good too.

Berlin, June 22nd, 2022 (The Berlin Spectator) — The Currywurst is Berlin’s specialty. Compared to the 9 Euro Ticket, it has a few advantages. It tastes a lot better, smells and looks more interesting and it sells better too. The downside is the fact that it does not get us anywhere, except to the bathroom. But the 9 Euro Ticket does.

According to Berlin’s main public transport provider, the state-owned BVG, it sells very well. So far, as many as 1.25 million 9 Euro Tickets have been sold in this city alone. “People really feel like using the public transport”, it says in a statement. All expectations had been exceeded. The BVG says the use of its trains, trams and buses had increased by 16 percent since May (when the 9 Euro was not valid yet).

With this attractive ticket, public transport in Berlin almost reached the number of passengers it had before the Corona pandemic. Oh yes, there is more good news: A poll the BVG conducted shows that 7 percent of those who bought the 9 Euro Ticket are motorists who did not use the public transport at all before they got this opportunity. The ticket has already achieved more than the Currywurst ever will.

So, the number of passengers has increased substantially. But, apparently, there is still plenty of room in the BVG’s trams, ‘U-Bahn’ trains and buses. Their utilization hardly ever exceeds 70 percent. “Whoever wants to can experience ecofriendly mobility in Berlin.” This is one of the Pulitzer Prize-worthy sentences the public transport provider’s PR department came up with.

On the national level, the 9 Euro Ticket is a success as well. Deutsche Bahn (DB) says, the number of passengers had increased by up to 30 percent. In some cases, especially on routes frequented by tourists, trains have been overcrowded. Also, the enormous increase puts a strain on Deutsche Bahn’s employees. Another issue is the fact that the big crowds of passengers do not exactly improve the punctuality of DB’s regional trains. But at least people are using them.

The 9 Euro Ticket can be used for the public transport in all of Germany and DB’s regional trains. Obviously, it costs 9 Euro (9.46 U.S. Dollars or 7.73 Pounds Sterling), and it is being offered for June, July and August of 2022. For each of those months, a new 9 Euro Ticket has to be purchased. Holders need to write their name on the ticket before they use it.

So, you want to know more about the 9 Euro Ticket which does not sell quite as well as Currywurst, but probably just as well as hot cakes? Check out all articles and features we ever published about it. You can find them here.

Germany: 469 Monkeypox Infections Confirmed, Most of them in Berlin