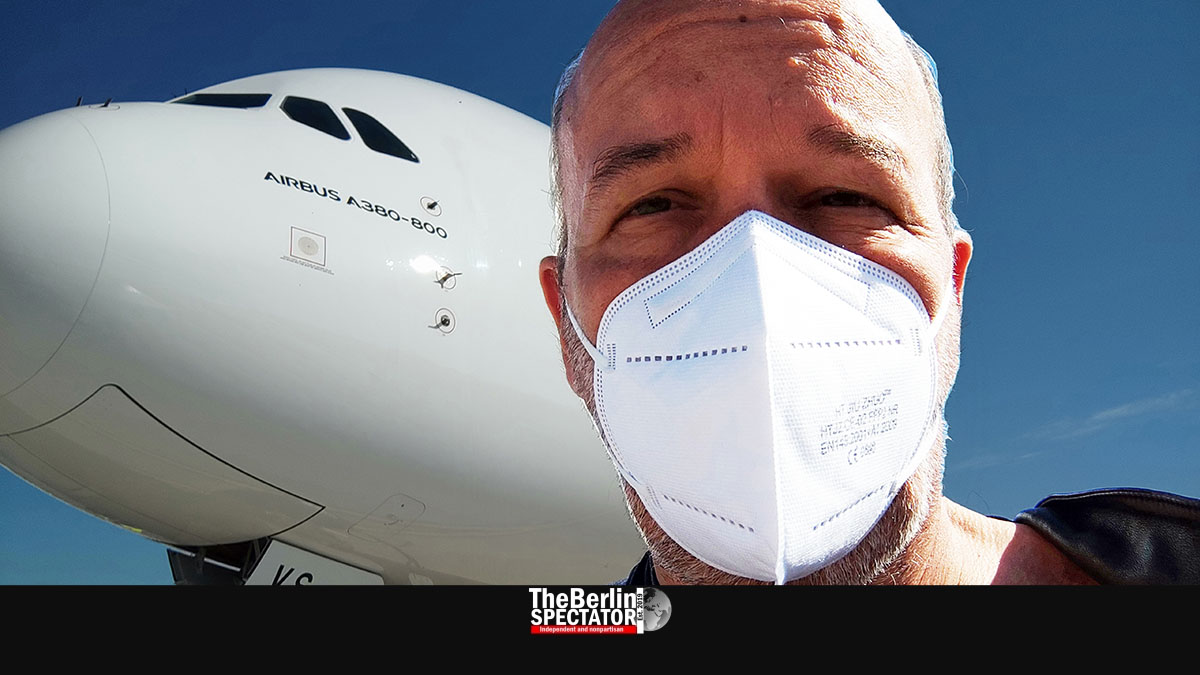 Representatives of the aerospace industry, military officers and reporters appeared at the fairgrounds at BER Airport today, for a glimpse at flying objects of all kinds. Our reporter was part of the crowd and almost fell out of a rescue helicopter.

Berlin, June 22nd, 2022. Update: June 23rd, 2022, 08:47 a.m. CEDT (The Berlin Spectator) —  It did not take long until I found my favorite spot at the ILA in Schönefeld, located in a more quiet corner of BER Airport. Emirates parked a rather large aircraft on the tarmac. When I entered it to see an Airbus A380 from the inside for the first time, I noticed their A/C was running at full throttle. They took the American approach, by cooling the whole thing down to 18 degrees Centigrade (64.4 degrees Fahrenheit). It felt so good to escape the exaggerated heat out there.

Emirates exhibited a truly impressive plane. Those First Class cubicles looked appealing indeed, and the very international flight attendants, who will be ground attendants for the duration of the ILA Berlin Air Show, were very kind. There was a Japanese stewardess, one from Morocco, and a colleague from Ukraine. The bar on the upper deck looked great.

Once I was back in the scorching summer heat, things got far more serious. First, I almost fell out of a rescue helicopter I had climbed into, which turned out to be a mistake. Then, I was in the area in which numerous companies and the armed forces of several countries showed off military aircraft and weapons. The F-35, which is the most advanced and only stealth combat aircraft money can buy, was there. An old Tornado was flown in by the German Air Force. It is quite a contrast.

The mechanic on site was a nice fellow. Once I had squeezed my 190 centimeters (6″3′) into this antiquated fighter jet, which was not comfortable at all, he said I was too tall to become a Tornado pilot. That is because persons with long legs will lose them when they eject in an emergency. It was time to get out of the Tornado and head over to the giant Boeing C-17 Globemaster III the Americans brought in. They also had a few other steel birds.

It was nice talking to several American soldiers from Florida, Maryland and other states whose orders were to fry in the summer heat like chickens on the grill, and to introduce their planes to trade fair visitors. Some had come in from some U.S. air base Washington state.

Rocket launchers are being exhibited at the ILA too, including the model Ukraine ordered from a German weapons manufacturer. Its representative at the trade fair was not at liberty to say when the Ukrainians will receive it. High-ranking officers from the United States and Germany’s European partner countries were present. Out here, visitors had to stop talking for a few seconds once in a while, when civilian Airbuses and Boeings took off from one of BER’s two runways located next to the exhibition.

Sweating like an idiot, I headed over to the fair halls all of which were full of industry representatives. Sure, Airbus and Boeing have nice stands at the ILA Berlin Air Show, but so do dozens of smaller companies that are part of the business too, including General Electric. The kind lady there, from Cincinnati (Ohio), flew in for the fair in order to explain her company’s engines to potential buyers. Even a space hall is part of the ILA. Here, they exhibit rockets, space modules and anything else astronauts need.

When I was back on the shuttle bus to the ‘U-Bahn’ train station in Berlin’s Rudow borough, I knew I had only seen a fraction of everything the trade fair offers. My main impression? This was a weapons trade fair more than anything else. Also because of the “turn of eras” Germany’s Chancellor Olaf Scholz recently announced, the weapons industry is represented well. The event will last until June 26th, 2022.

Only the last two days are for “private visitors”. For now, aviation and spacefaring experts, military officers, political delegations, representatives from government agencies and research institutes as well as other scientists go there. Security is tight in Schönefeld.

Germany: 469 Monkeypox Infections Confirmed, Most of them in Berlin