Germany: Will the 9 Euro Ticket Have a Successor? 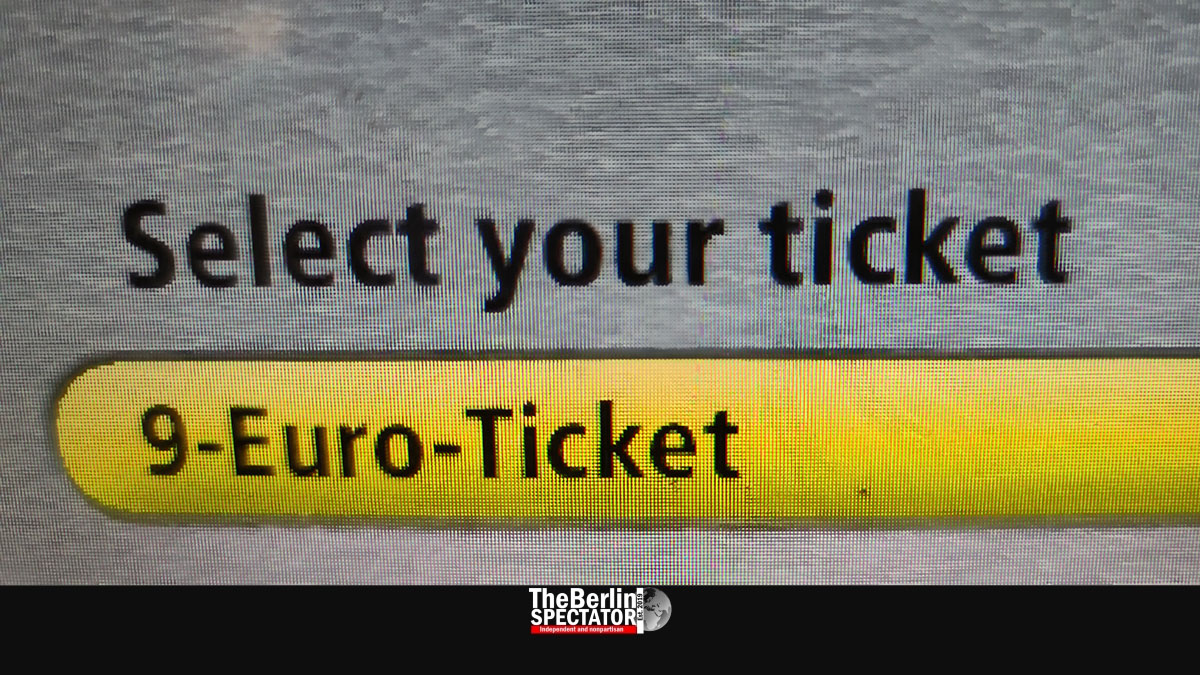 Germany has a new bestseller. Far more than thirty million 9 Euro Tickets have been sold because the offer is unbeatable and serves its purpose. Now, government officials and MPs want to have a successor for the ticket of tickets.

Berlin, July 11th, 2022 (The Berlin Spectator) — Offering a cheap ticket that lets people use public transport and regional trains in all of Germany is a revolutionary idea. With this offer, people are being reimbursed for the skyrocketing energy prices. At the same time, those who hardly ever used public transport were supposed to be convinced of its advantages. Traveling like crazy for a month on public transport and Deutsche Bahn’s trains usually costs hundreds of Euro. Now, the 9 Euro Ticket includes everything, except for the fastest trains, for 9 Euro (9.14 U.S. Dollars or 7.62 Pounds Sterling).

The 9 Euro Ticket has one single disadvantage: It will expire on August 31st, 2022. The whole thing was supposed to last for three-month only. Even Transport Minister Volker Wissing of the FDP, a party that was known for favoring motorists until now, was happy about the 9 Euro Ticket’s “fulminant success”. He told the ‘Neue Osnabrücker Zeitung’ daily there was less traffic on the streets and the number of traffic jams had decreased noticeably. Many people had transferred to public transport.

In the interview, Wissing came up with an idea for the time after the 9 Euro Ticket. He said the fare system chaos needed to be ended. If tickets were valid all over the country, public transport would be frequented a lot more, the Minister stated. He did not promise anything, but said “everything” would be evaluated. In fall, the government would draw its conclusions.

Of course, Wissing’s proposal would mean that only one element of the 9 Euro Ticket would become a long-term solution. In Germany, many are hoping for a far more attractive offer after August. According to a recent poll, 70 percent of all Germans want the 9 Euro Ticket to be prolonged. This could be difficult, also because the measure costs the state 2.5 billion Euro (2.66 billion Dollars or 2.14 billion Pounds) for three months. This rather large amount is being paid to the federal states, as a reimbursement for income state-owned public transport companies ae losing because of the 9 Euro Ticket.

At the Berlin Bundestag, there are those who say the money required for a prolongation could be saved elsewhere. For the Greens, Nyke Slawik told the parliament, the 9 Euro Ticket was an opportunity to make headway in the mobility transition. She suggested a cancellation of climate-damaging subsidies. That way, billions of Euro could be saved and invested into a successor for the popular ticket.

The 9 Euro Ticket is available for three months. June was the first month, August is the last. Holders can use it for public transport in all of Germany as well as almost all regional trains. Usually, a day ticket for the public transport in one city is about 9 Euro (9.16 U.S. Dollars or 7.62 Pounds Sterling). Now, this amount takes Germans, residents of other nationalities and visitors a lot farther.

Click here to find all of our articles and features about the 9 Euro Ticket.

Germany: President Steinmeier to Visit U.S. Army Base in Bavaria