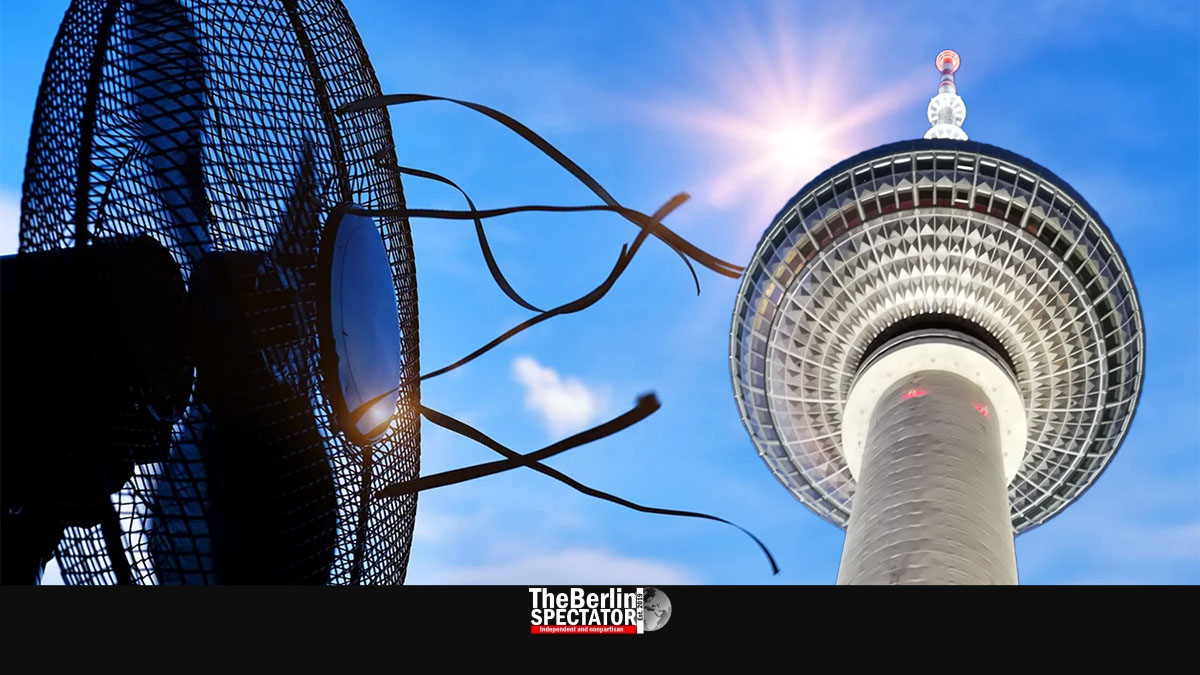 In Germany, Tuesday was the hottest day of the year. The issue is that the record will probably be broken today, with temperatures of up to 40 degrees Centigrade (104 degrees Fahrenheit) in Berlin. People were told to be careful and to drive less. In the meantime, another brawl was reported at one of Berlin’s public outdoor swimming pools.

Berlin, July 20th, 2022. Update: 9:13 a.m. (The Berlin Spectator) — The German Meteorological Service put in place an excessive heat warning for Berlin and Brandenburg province. Especially elderly people and persons dependent on care would be burdened, a statement said. Refraining from sports or a lot of movement outdoors and drinking a lot of water is strongly recommended.

According to Berlin’s Senate Administration for the Environment, the ozone level is high too. Individuals who were sensitive in these situations needed to watch it. All Berliners were asked not to drive their cars in this heat, unless it was absolutely necessary, because the exhaust gases contributed to the formation of ozone. The use of power boats and lawn mowers with combusion engines needed to be decreased too.

Tuesday was the hottest day of the year, so far, with temperatures of up to 36 degrees Centigrade (97 degrees Fahrenheit). This record will probably be broken today. Up to 40 degrees C (104 degrees F) are possible. Yesterday, being outdoors was unbearable to many residents. The few courageous tourists who walked around at Museum Island and in other areas in Berlin on Tuesday evening felt the extreme heat coming in from all sides, including the ground, which reflected it.

Berliners who wanted to cool down in public outdoor swimming pools ran into issues on Tuesday. First, the online ticket shop for all public pools in the city froze and crashed because the server obviously lacked the required capacity. In the evening, another brawl was reported at Berlin’s Sommerbad Neukölln pool. The police needed to step in to end it. Eleven visitors were injured, two were arrested. This was the third incident of this kind at Berlin’s public swimming pools this summer, and the second one at that particular pool.

Berlin and Brandenburg were not the only regions with excerssive heat in Germany. Most of the country was affected. On Tuesday, Emsdetten, a town in North Rhine-Westphalia, reported the highest temperature of them all. Forty degrees C (104 degrees F) were measured there. Duisburg reported 39.3 degrees C (103 degrees F). The problem is that Wednesday is supposed to be even hotter, according to meteorologists.

In many of Berlin’s public transport vehicles, A/Cs were either not switched or non-existent. Especially on older trams, buses and ‘S-Bahn’ trains, it must have been 50 degrees. Taking rides in stuffy wagons and vehicles was not exactly pleasant. At least some coolness was felt in ‘U-Bahn’ (subway, metro, underground, tube) tunnels.

Several forest fires were reported in Germany on Tuesday, including in the Sauerland region, near Cölbe in the federal state of Hesse, in the city of Essen, near Hanau, near Lingen, near Kandel and near Overath. In Berlin and Brandenburg, the danger of forest fires is elevated.

Related post: Top 10: You Know it is Summer in Berlin when …