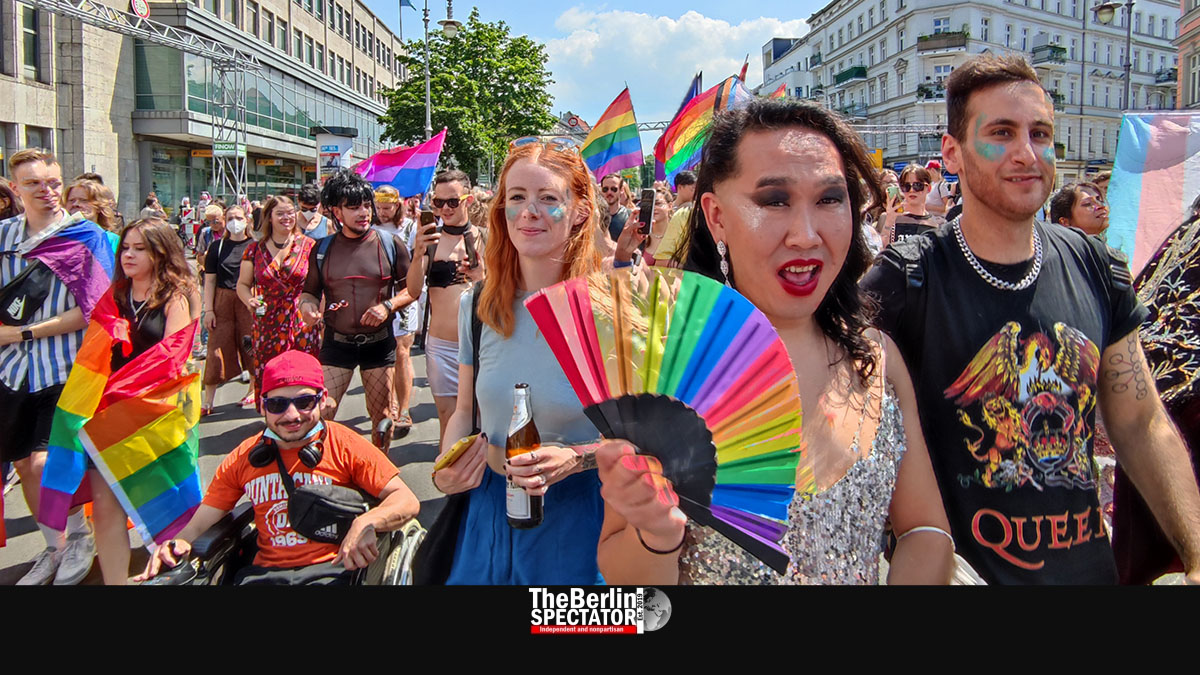 In Berlin, Christopher Street Day (CSD) is supposed to attract half a million members of the LGBTIQ community and supporters on Saturday. This year’s motto is “United in Love – Against Hate, War and Discrimination”. The event is both a parade and a protest.

Berlin, July 21st, 2022 (The Berlin Spectator) — In late June of 1969, the police violently raided the gay pub Stonewall Inn in New York City’s Christopher Street and similar establishments. Afterwards, gays, lesbians and transsexuals protested against police violence. Their dedication, more than half a century ago, is symbolic for the ongoing fight against intolerance and homophobia, which has since lead to many successes in the United States and Western European countries.

In Germany, same sex marriage became legal only five years ago. There is homophobia and discrimination against members of the LGBTIQ community in the Federal Republic, but far less than in certain Eastern European countries, including Bulgaria, where the homophobia level is unbearable. The fight for gay rights continues.

Berlin’s Lesbian-Gay Street Fest in the Schöneberg borough marked the beginning of CSD week last weekend. The Christopher Street Day itself, on Saturday, July 23rd, 2022, is the main event. In 2019, half a million people took part. Then, Corona struck. In 2020, the CSD parade was cancelled. A year later, in 2021, it was divided into two demonstrations with a much smaller number of participants. This year, the parade is supposed to be back at its usual size, in spite of the very high Corona infection numbers.

Two days before the big event, the official CSD Berlin website still said the program for CSD 2022 would be “coming soon”, meaning it was not published there. But a list of demands was. “In order to reduce violence against queer people, we demand from the Berlin Senator for Justice, Diversity and Anti-Discrimination, Prof. Dr. Lena Kreck, a fast and complete investigation of all crimes against LGBTQIA* people and a zero-tolerance policy of all forms of discrimination”, the organizers’ statement said.

They also want Berlin to provide mandatory training for city clerks, with the purpose of raising awareness in regard to hate crimes and hate speech against queer people. The Berlin Police Department and the Senate Administration of the Interior were asked to establish “a contact point and conciliation offices” for members of the community. And they want “norm-critical gender, body and sexuality education at all educational institutions by 2025”.

The list of demands is long. Some of them will probably not be fulfilled anytime soon. “We demand that first names no longer have to be gender-assigning”, it says. “We demand that gender no longer has to be determined at birth.” Rights for LGBTQI persons in other countries are listed as well. All demands can be found here. The motto of this years edition of CSD Berlin is “United in Love – Against Hate, War and Discrimination”.

On Saturday, July 23rd, 2022, the big CSD parade in Berlin will commence at 12:00 noon. From Leipziger Strasse, between Charlottenstrasse and Axel-Springer-Strasse, it will start moving towards Potsdamer Platz square, Nollendorfplatz, Lützowplatz, the Victory Column and Strasse des 17. Juni before it ends at Brandenburg Gate. On a big stage, several bands and individual artists will be performing. As always, CSD Berlin is expected to be a peaceful and colorful event.

Before the big parade takes place on July 23rd, smaller events are scheduled to take place. They include ‘CSD auf der Spree’, a boat party on the Spree river. This one takes place today, on July 21st, 2022, at 5:30 p.m.. The meeting point is Mercedes Benz Platz, according to the CSD Berlin website. A Lesbian CSD warmup party was announced too. It is supposed to happen on Friday, July 22nd, at 5:00 p.m. at the Sage Beach Club.