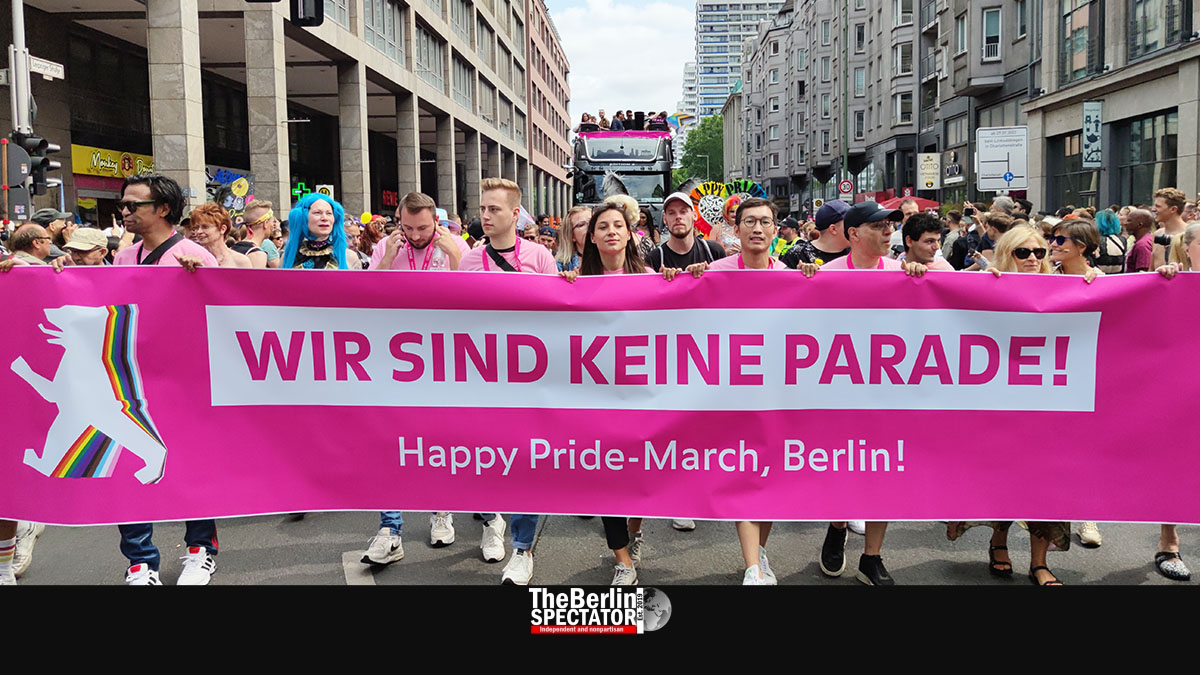 In Berlin, hundreds of thousands of people joined Christopher Street Day on Saturday. The giant event was both a protest and a parade, until a banner said it was not. Whatever the right word is: The happening was all about love, tolerance and togetherness.

Berlin, July 23rd, 2022. Update: July 24th, 2022, 6:20 a.m. CEDT (The Berlin Spectator) — “United in love – Against hatred, war and discrimination” was the official motto of CSD Berlin, a huge rally that was going to last all day long. At noon, tens of thousands of gays, lesbians, transsexuals, other members of the LGBTQI community and supporters arrived in the city center, on Leipziger Strasse.

The crowd grew by the minute, as it moved towards Potsdamer Platz, Nollendorfplatz, the Victory Column and Brandenburg Gate. Many of the participants carried rainbow flags, the worldwide symbol of the LGBTQI community, or clothing in those colors. Drag queens in shimmering, sparkling outfits were there and danced. Thousands moved to partially funky music, but also to Techno sounds.

It was about time for a full-blown CSD Berlin, also because the 2020 edition had to be cancelled due to the Corona pandemic and the strict rules that were in place then. In 2021, the event was divided into two relatively small protests. Today’s giant rally was supposed to be both a protest for tolerance and peace and a parade. But a sign held by several participants who were heading the demonstration read “We are not a parade”.

Countless big trucks that were carrying giant loudspeakers and dancing people moved ahead slowly, between those huge crowds who were on their feet on the streets of Berlin. When the front part of the rally approached Potsdamer Platz, the back part had not even started moving. This is how big CSD Berlin was today. Many participants drank beer and champagne as they danced and cheered.

Hardly anyone wore protective masks, in spite of the fact that Corona is still spreading rapidly. While this crisis obviously was forgotten, another was not. “Ukrainian Queers” were part of the huge gathering. Signs with those two words were worn by members of a small group of people who were part of CSD Berlin today. Four men in colorful dresses who also wore feathers in the colors of the Ukrainian flag on their heads held signs saying “We stand with Ukraine!”.

Berlin’s CSD week started a week ago, when the Gay Lesbian City Fest commenced. Dyke March Berlin was another side event. It took place on Friday evening, when hundreds of lesbians and their supporters took to the streets in Berlin’s Tempelhof borough and walked all the way to Treptower Park. In the evening, the organizers said 600,000 people had taken part in CSD Berlin. At first, the police said 150,000 had joined the rally. Later, the number was increased to 350,000.

Compared to the LGBTQI community in many other countries, the one in Germany has many rights. In 2017, same sex marriage was finally approved by the Bundestag. But, of course, there is discrimination and homphobia in the Federal Republic too. Another problem that mainly affects homosexual men right now is the Monkeypox outbreak. With more than 1,000 cases, Berlin is Germany’s hotspot.