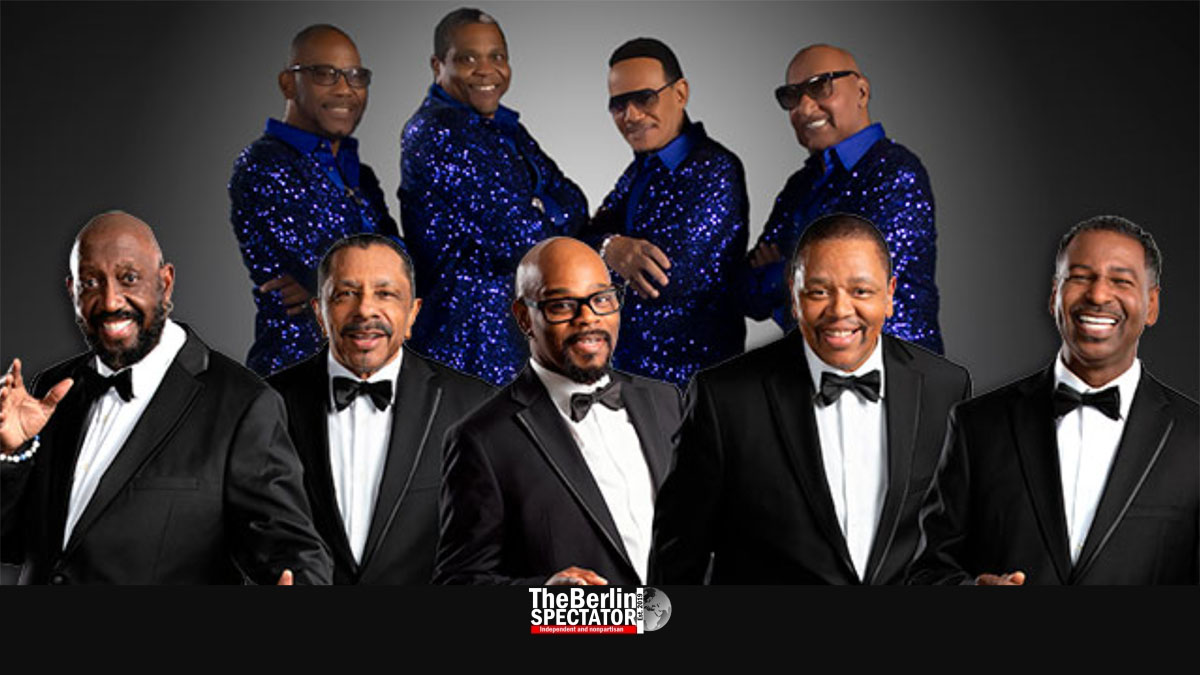 The legendary Temptations are almost as active as they were in the 1960s. One original member, 80-year-old Otis Williams, is still with them. Guess what: They are coming to Europe. It gets better: The Four Tops will be part of the tour too.

Berlin, July 24th, 2022 (The Berlin Spectator) — Founded in 1960 in Detroit, The Temptations are the pioneers of Soul. For six decades, they have mesmerized their audiences and fans. And they delivered countless hits. People of several generations listen to them today, 60 years after it all began.

In 1969, winning a Grammy award was still considered a mission impossible for a Black band. But they got one that year, for their tune ‘Cloud Nine’. They were the first Motown act to be honored this way. Countless awards later, nine years ago, in 2013, they also received the Grammy Lifetime Achievement Award. It was about time for that one.

One of the first big hits The Temptations scored was ‘My Girl’ in 1965. Recorded in 1971, ‘Just My Imagination’ is another one absolutely everyone knows. These tunes are still being played on radio stations around the world today. In 1972, ‘Papa Was a Rollin’ Stone’ became yet another huge Temptations hit. This one has been covered by absolutely everyone since.

Phil Collins is among the artists who interpreted ‘Papa Was a Rollin’ Stone’. So are The Jackson Five, Was (Not Was), Living Colour, Precious Wilson and even George Michael. While their songs were borrowed by fellow artists, The Temptations never stopped touring or producing hits. And they tried to adapt to the times they were living in.

The year was 1984 when they came up with yet another hit. It was entitled ‘Treat Her Like a Lady’ and consisted of drum programing, exaggerated 1980s synths as well as other elements that were considered modern at the time. But it was still easy to identify The Temptations through their voices and general approach.

In 1960, there were five founding members. Paul Williams died in 1973, Elbridge Bryant, who died in 1975, was thrown out of the group in 1963. Eddie Kendricks, who also had a good solo career, passed away in 1992. Melvin Franklin a.k.a. David English, who was part of The Temptations until 1994, died in 1995. The only original member who is still part of the endeavor today is the great Otis Williams. He will turn 81 the day The Temptations perform in Berlin.

They hit the top of the U.S. R&B Charts a million times. Some of their songs were even released in German, French, Spanish and Italian in the 1960s. From today’s perspective, this aspect is actually crazy. The band went from classic 1960s style Soul to Funk and Dance in the 1980s. The late Dennis Edwards helped them with that transition. Today, they are mostly back to the classic style, and they are still recording.

“Give it up for The Temptations!” This is how Sindbad a.k.a David Adkins introduced The Temptations in 1997 at his Soul Festival in Aruba. What a funky intro they delivered! Counting the stages they have performed on until then, or since that great performance, is impossible.

Ready for the good news? Here we go: The Temptations are coming to perform in Europe. By the way: They won’t tour on their own, but with The Four Tops. In 1953, they were founded as The Four Aims. Just like The Temptations and a few other American Soul acts, they defined the Motown sound early on. Having both bands on the same stages in Europe is nothing less than sensational.

From London to Hamburg

The Temptations and The Four Tops are scheduled to hit the O2 in London first, on October 11th, 2022, just before they perform in Paris on the 12th. Stuttgart is next. They will be there on October 15th, before they continue on to Nuremberg. This is where they will have a gig on October 17th. Vienna is on the tour plan as well. This concert, the only one in Austria, takes place on October 18th.

Lingen (October 21st), Düsseldorf (October 26th) and Munich (October 29th) are on the tour plan too. On October 30th, 2022, which is Otis Williams’ 81st birthday, The Temptations and The Four Tops will be in Berlin. A gig in Hamburg is scheduled for October 31st. By the way: Two concerts in the Netherlands, in Utrecht and Nijmegen, were squeezed into the tour schedule as well.

Tickets for the performances in Germany, and the one in Austria, can be purchased here.