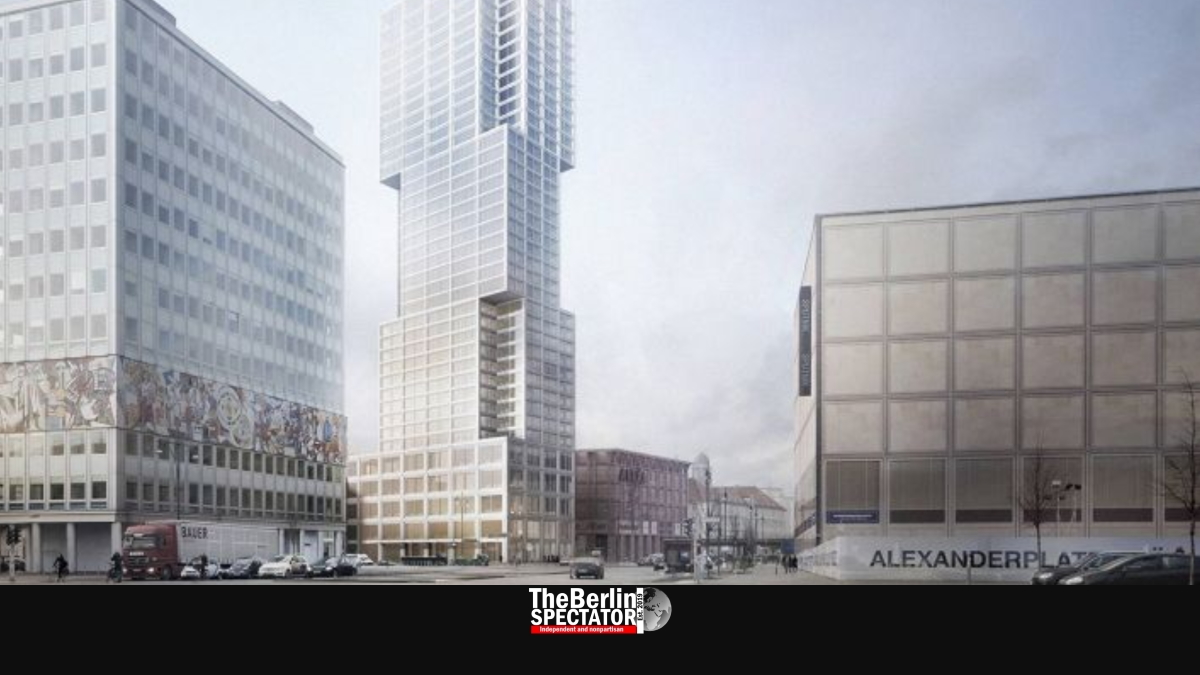 At Alexanderplatz square in the heart of Berlin, a new high-rise was going to be erected by September of 2023. But the construction is delayed. Now, it is unclear whether the project will be completed at all.

Berlin, July 25th, 2022 (The Berlin Spectator) — With a hight of 150 meters (492 feet), the Alexander Tower in Berlin’s Mitte borough was supposed to become Berlin’s highest building, at least for a few months, until the Estrel Tower in Neukölln overtakes it with its height of 176 meters (577 feet). But while the Estrel Tower is making headway, the Alexander Tower project is not.

Berlin’s Finance Senator Daniel Wesener is not happy. As the RBB radio and TV network reported first, he is looking into a repurchase of the premises the building was supposed to be erected on. Next to the main entrance to the Alexa Mall, just a few steps from Alexanderplatz, the construction work commenced in November of 2019, just before Corona hit. Since, a big hole was dug and a lot of noise was caused. But, after two and a half years, no building can be identified at the location yet, not even the ground floor.

According to a contract the city state of Berlin signed with the investors, an Armenian company called Monarch the headquarters of which are located in Moscow, the Alexander Tower was supposed to be completed by September of 2023. A glance at the construction site answers the question whether this completion date can still be kept. The answer is no.

The investors conceded there is a delay. On the RBB’s media, Monarch’s lawyer Detlef Stoecker was quoted as saying the September 2023 deadline could not be kept anymore. Now, the company was hoping to erect its tower by the end of 2024. According to Stoecker, it took a long time to get a required assessment which confirmed that the nearby tunnel below Grunerstrasse would not be damaged by the construction.

Delivery issues had delayed the construction as well, the lawyer stated. He mentioned another reason: For a company headquartered in Russia, it was difficult to get funds from there to Germany. He was referring to the sanctions that were put in place because of Russia’s war of aggression against its smaller neighbor Ukraine.

Senator Daniel Wesener sees the whole thing in a different light. He said not even the bottom panel of the building had been completed. There was a delay in spite of the fact that Monarch had gotten an extension because of the complicated assessment the company had been forced to wait for. According to Wesener, a statement by a lawyer according to which progress was being made, is not good enough. He is considering a buyback of the premises for the market value of 2019. This means the Alexander Tower is on shaky ground right now. It remains to be seen how and when the issue will be settled.

The Alexander Berlin Capital Tower, which is the building’s full name, was supposed to have 377 apartments on 35 floors, four underground floors, a spa, a conference center, a restaurant, a sports area, a swimming pool and a movie theater. If the construction is completed, it will make the area around Alexanderplatz more attractive. The square was the pride of East Berlin until Germany’s reunification. Thirty-two years later, it still lacks beauty. So far, all attempts to improve its look have failed.

Germany: Walkouts at Lufthansa to Cause Chaos at Airports