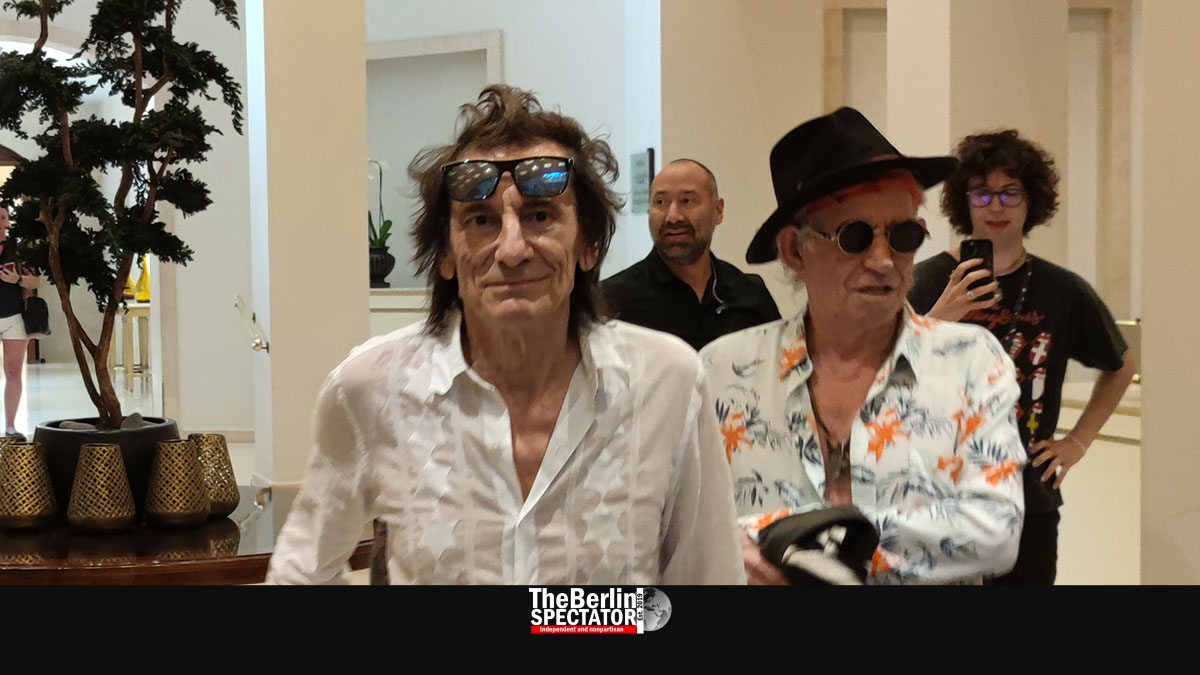 When regular people want to leave a building, they just locate the exit and walk out. That’s it. But when you’re a Rolling Stone, things are a little different. In this case, leaving a hotel is an event that requires a lot of preparation.

Berlin, August 3rd, 2022 (The Berlin Spectator) — On Wednesday in the early afternoon, some 400 people stood in front of the Hotel Adlon Kempinski in the heart of Berlin. Since about 100 of them wore Rolling Stones t-shirts, and because that very same band will perform at Berlin’s ‘Waldbühne’ tonight, it did not take a science degree to figure out whom these people were waiting for.

It was the same picture on Tuesday, when Mick Jagger, Ron Wood and Keith Richards arrived. A gazillion fans were waiting and waiting, but did not get to see their idols much. At some point, Ron Wood and his family left the hotel for a dinner at a nice Italian place. Mick Jagger reportedly appeared behind a window several times. Today, patient fans did get to see the guys as they left the hotel for the venue.

In front of the Adlon, the police were busy making sure the street was not blocked by all of those Stones lovers, most of whom were not even conceived when the band hit West Berlin for the first time, in 1965. Back then, the gig ended after thirty minutes. The audience was unhappy and basically took apart the ‘Waldbühne’. But The Rolling Stones returned several times. Since 1982, they have had so many “last tours” that they probably lost track themselves.

Today, inside the Adlon Kempinski, the hotel’s security started setting up queue barrier posts in the lobby at about 2:30 p.m.. Nobody was supposed to stand in Mick Jagger’s way. The band’s own security guys behaved like F.B.I. agents, as they were giving people orders. This was when the big waiting game commenced. Michael Sorgenfrey, the Adlon’s director, stood in front of the elevator along with his security agents. When some of the fans tried to pass the barrier posts from the lobby café, he walked up to them and explained that the Stones’ security would make the hotel responsible if it did not adhere to the security requirements.

After a while, family members appeared, including Ron Wood’s little daughters and Mick Jagger’s son Lucas. Then, after another 20 minutes, the big moment arrived, but it passed quickly. Ron Wood and Keith Richards came out of the elevator and walked towards the exit. Fans screamed, while those security officers made sure nothing and nobody would stop the stars.

Then, Sir Michael Philip ‘Mick’ Jagger, who turned 79 eight days ago, showed up. He looked relaxed and walked through the lobby with a smile. His entourage was following him every step of the way. Seconds later, those hundreds of fans outside needed valium tablets. Obviously, they got what they had waited for, namely a good look at their idols, at 35 degrees Centigrade (95 degrees Fahrenheit).

So, how do you leave a building when you’re a Rolling Stone? Well, the choreography matters a lot. The world is a stage. Obviously, this includes this little hotel lobby in Berlin, located just a few steps from Brandenburg Gate. When you are a Rolling Stone, you know what to do because you had six decades to rehearse.