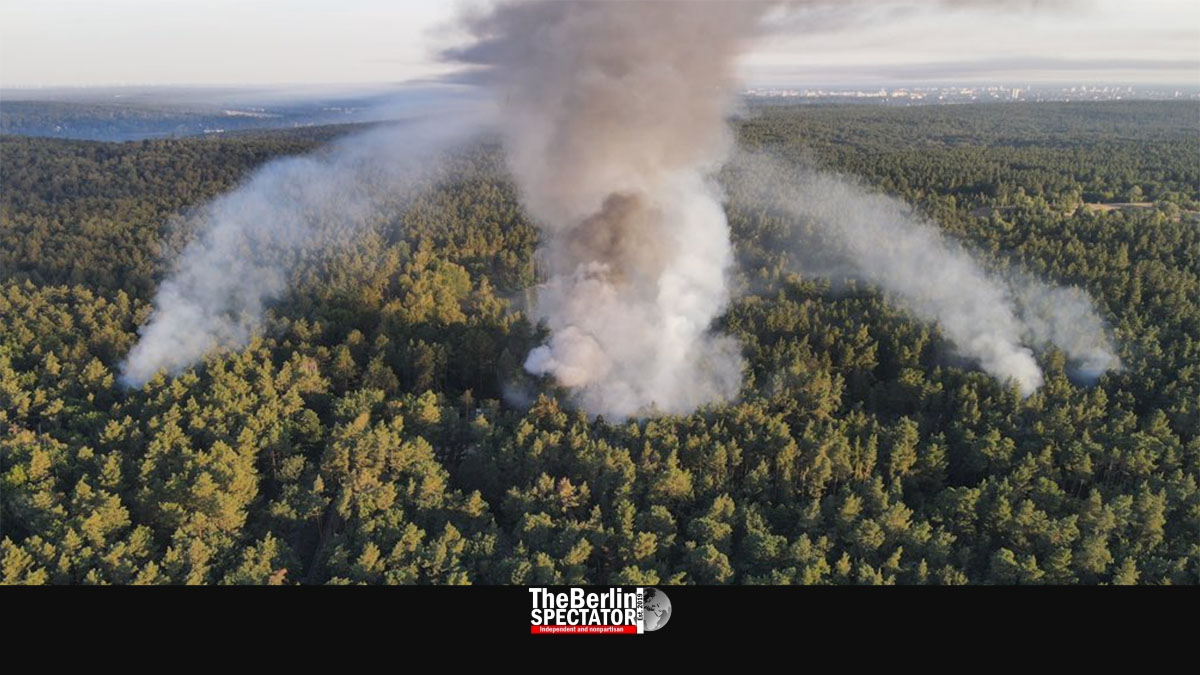 Berlin’s Fire Department has been fighting the flames at Grunewald, the city’s largest forest, all night. More explosions at an ammunition site located there were reported.

Berlin, August 5th, 2022 (The Berlin Spectator) — Smoke could be smelled all over Berlin on Thursday night, as the city’s Fire Department was still trying to extinguish the forest fire in Grunewald. It was caused by explosions at an ammunition and bomb defusing site located right there in the forest. For now, it is unclear who or what triggered the explosions.

Because they could not get the fire under control on their own, the firefighters got support from other federal states. Special ‘fire tanks’ just arrived. Before, a regular tank provided by Germany’s armed forces had been used to cut swaths into the forest. That way, the fire was supposed to be kept from spreading further. Around the fires, the Fire Department also sprayed water onto thousands of trees that were not burning in an attempt to save them.

The fight against the flames commenced more than 24 hours ago. Early this morning, the Fire Department said more explosions had taken place on Thursday in the late evening. During the night, special equipment had been delivered. It would help to assess the situation more precisely. People were ordered not to enter Grunewald forest. There was danger to life. In summary, those statements did not sound encouraging at all.

There is a zone with a radius of 1 kilometer (0.6 miles) the fires are not supposed to spread out of. This is one of the main goals the Fire Department has, apart from extinguising the fires. So far, the firefighters have managed to keep the flames in that area. Nobody has been evacuated. At least right now, no homes are in danger. The next ones are 2 kilometers (1.2 miles) away.

On Thursday, Berlin’s Governing Mayor Franziska Giffey interrupted her summer vacation in order to visit the firefighters in Grunewald. She thanked them for their hard work and said this forest fire was an “unparalleled event”. Nothing like this had happened before in Berlin’s post-war history.

The Berlin Police Department was involved too in the efforts too, with water cannons that were used in the big fight against the flames. The ‘Avus’ city highway was still closed on Friday morning. Trains in the area were affected as well.

For today, Friday, thunderstorms were forecast for the afternoon. The Fire Department is hoping for a lot of rain that could help them extinguish the fire.