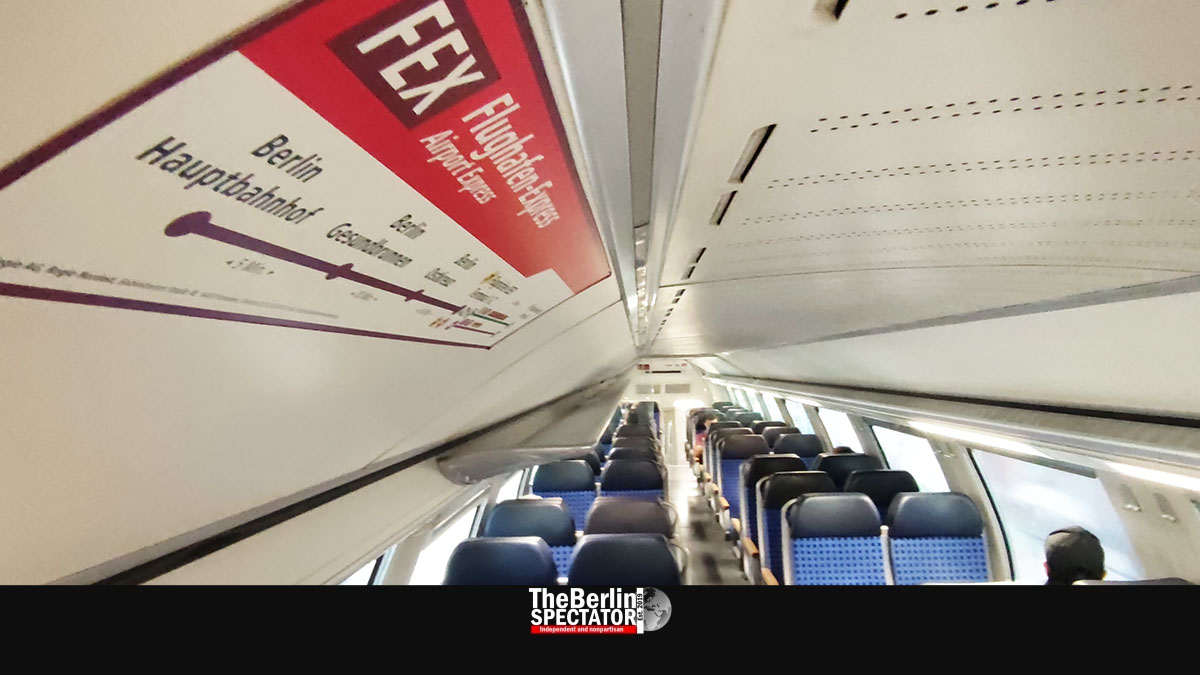 Berlin and Brandenburg have had an elegant new airport for two years. Now, there is an issue, and it is not the first one. Getting to BER Airport or back to Berlin just became more difficult.

Berlin, August 8th, 2022 (The Berlin Spectator) — If there was a bad ideas contest, Berlin would probably win it. One of the worst ones is combining sausages with curry sauce. Shutting down the airport express train known as FEX (‘Flughafen Express’) during the last two weeks of the summer vacation would likely hit the second place. A switch and other parts of the train tracks it is using need to be replaced, and of course, it has to happen in August.

This means the best way of getting to BER Airport in Schönefeld, Brandenburg, or from the airport to Berlin, will not be available during the last two weeks of the summer vacations. From today, the FEX will not be in service. This situation is supposed to last until August 22nd, 2022, which is the first day of school. Berliners who return from summer vacation trips with their sun tans, tens of thousands of them, will have to find some other way to get back home after touching down at BER.

The fastest way to get to BER Airport, or to get the hell out of there, is doing so by plane. Since the second-best way, the FEX, is not available for two weeks, many Berliners will rely on ‘S-Bahn’ trains. The issue is that they are not reliable. There is always something. On a regular basis, signalboxes are out of service. Quite often, the ‘S-Bahn’ is shut down temporarily because of police operations. Construction projects are another reason for delays and shutdowns. When the ‘S-Bahn’ actually works, the trip takes some 20 minutes longer compared to the FEX.

There are buses from BER to Steglitz or Potsdam. Also, there is always the taxi option, but it is pricey. Sure, getting picked up by car is another option, but parking at the wonderful new airport costs 7 Euro (7.13 U.S. Dollars or 5.70 Pounds Sterling) per hour. Some regional trains stop at BER Airport as well. Depending on your exact destination, using the X7 bus to the ‘U-Bahn’ station Rudow in order to hop on the ‘U7’ line might be the best option while the FEX is out of service.

Deutsche Bahn’s main FEX website did not even mention the construction break as of August 8th, 2022, the first day of the shutdown. Usually, this train connects Berlin Central Station to BER Airport via Gesundbrunnen and Ostkreuz, two of Berlin’s many major train stations. The trip from Central Station to BER takes 30 minutes, but only when the train actually is in service.

Berlin wouldn’t be Berlin is there wasn’t another problem: The regional trains returning vacationers could have used will not be going to BER Airport’s main station from August 15th to August 19th, the week everyone returns to Berlin from Barbeidos, Bordeaux or Barcelona. Because of yet another construction project, they will be stopping at Terminal 5 instead. But getting from Terminal 1-2 to Terminal 5, or vice versa, is a pain. Besides, Terminal 5 was shut down on February 23rd, 2021, because the Corona pandemic decreased the number of flight passengers substantially.