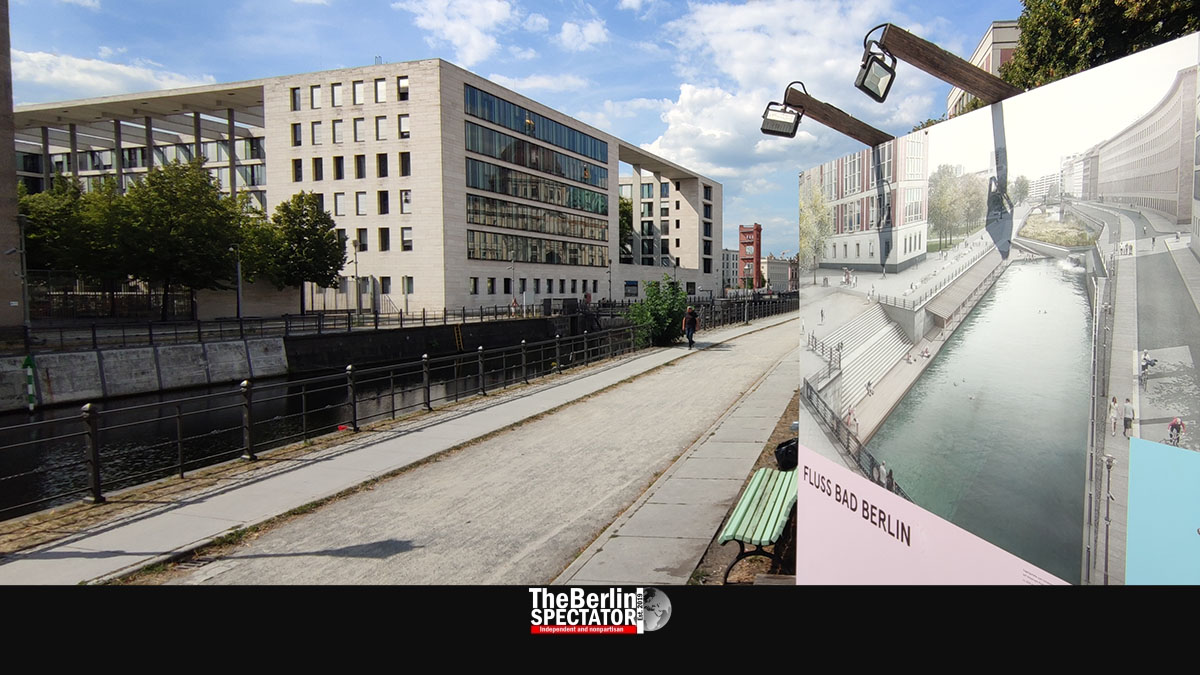 In Berlin, an association with 500 members wants the city to turn the Spree Canal into some kind of a swimming pool. Millions of Euro have already been invested. But the project might never be implemented.

Berlin, August 11th, 2022 (The Berlin Spectator) — When the idea was born, the world was still standing. In late 2012, there was no Corona, there was no war in Ukraine. Even Crimea was still controlled by the country it actually is part of. Yes, the climate crisis was already going on but, other than that, normality ruled when the association Flussbad Berlin was founded. Three years later, it even got an office with employees.

So far, the initiative has received 6 million Euro (61.9 million U.S. Dollars or 5.06 Pounds Sterling) from the city state of Berlin and the Federal Republic of Germany, for public relations work and the development of the idea the endeavor commenced with. This is about turning the Spree Canal into a swimming pool right next to Museum Island. Sure, Berlin already has 15 public outdoor swimming pools. On the other hand, swimming or cooling down in the Spree Canal could be a priceless experience.

Not far from Berlin Palace, Berliners or tourists who walk around in Friedrichsgracht, alongside the canal, will automatically run into a sign that says “Spreebad Berlin”. In German, the syllable ‘bad’ does not stand for the English word ‘bad’, even though it probably should in this case, but rather for ‘bath’. But even those who explore the entire area thoroughly will not find any object that would deserve this expression. So, what is going on here?

Ten years after the foundation of the association, the river bath remains an idea the people involved want to implement. The problem is that there are hurdles, including rather high ones. Federal laws would have to be changed in order to allow people to swim or cool down in a canal of this kind. Also, a lot of additional money would be needed to construct a dock people could reach the water from and the rest of the infrastructure needed for a swimming pool.

Especially in today’s Berlin, in which energy needs to be saved and tens of thousands of Ukrainian refugees are being supported because of Russia’s war of aggression against their country, the creation of a canal bath seems somewhat unrealistic. There is another problem: The association Flussbad Berlin placed a big order for displays with a company that belongs to its own chairman and his brother. Since July, the Berlin Senate has been looking into this particular issue.

But, at least for now, the Flussbad Berlin project is alive. Next to its sign at the Spree Canal, three inflatable pools for little children were set up. The other day, a kind young lady was selling beverages from a little wooden hut next to a tiny exhibition that shows what the canal bath could look like. “Flussbad Berlin reactivates the Spree Canal as a valuable public space in the center of Berlin”, it says on the initiative’s website. But nobody is swimming in the canal, and nobody ever will. At least this seems to be the most likely scenario.

Scholz Back at Work, Announces More Support for Ukraine, Aid Package for Germans