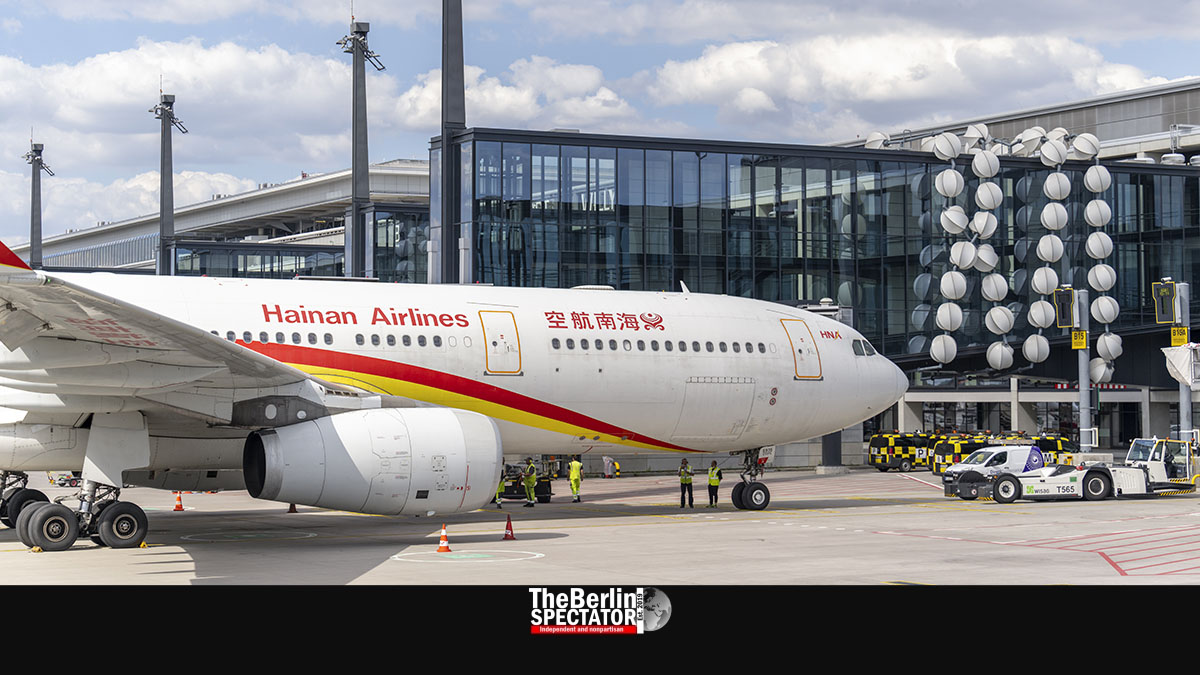 Germany’s most important airport is not located in or near its capital, but in Frankfurt am Main. That is why each new intercontinental flight route BER Airport gets is a sensation. Its new Beijing connection qualifies.

Berlin, August 13th, 2022 (The Berlin Spectator) — Compared to Frankfurt Airport, Berlin’s BER looks like a provincial airfield. Sure, Terminal 1 in Schönefeld, Brandenburg, is elegant. But the number of intercontinental flights it offers is rather modest. Let’s begin with destinations that are less than 4,000 kilometers away: Tel Aviv, Amman, Beirut, Cairo, Hurghada. That’s it.

United Airlines and Norse Atlantic Airways are offering new flights from and to Newark, New Jersey, New York, NY, and Los Angeles, California. A flight route to Virginia’s Dulles Airport near Washington D.C. was cancelled just before it was supposed to be implemented. So, what about the other side of the world? Scoot, a brand that belongs to Singapore Airlines, added direct flights from BER Airport to Singapore to its schedule in the fall of 2021.

Since yesterday, there is one more intercontinental flight route that deserves this expression. Hainan Airlines takes passengers from Brandenburg to China. Beijing is the actual destination, but because of China’s strict Corona rules, these flights land at Dalian Zhoushuizi International Airport first. This is where the passengers are checked for COVID-19.

So, how often do these plabes take off? Once a week only. On Fridays at 2:30 a.m., they leave Beijing. At 6:40 a.m. they touch down at BER. Ten hours later, on Fridays at 4:50 p.m., they take off again in order return where they came from. Hainan Airlines uses twin-engine Airbus A330 aircraft with 293 passenger seats.

Before Corona hit, Hainan Airlines connected former Tegel Airport to Beijing. This was before BER Airport was inaugurated, with a slight delay of 9 years, in October of 2020. This is why Hainan is offering the very first direct flight to China from Berlin Brandenburg Willy Brandt Airport. Yes, this is BER’s actual name.

Berliners and Brandenburgers who want to fly to any intercontinental destination not mentioned here will have to go to Frankfurt, Munich, Amsterdam, Paris, Madrid, Rome, Brussels, Vienna or Zurich first. Until the reunification, Lufthansa was not allowed to fly to West Berlin. Besides, the city was too far away from the old Federal Republic. This is why Frankfurt Airport became its most important airline hub, and why Germany’s capital does not accommodate the country’s most important airport.