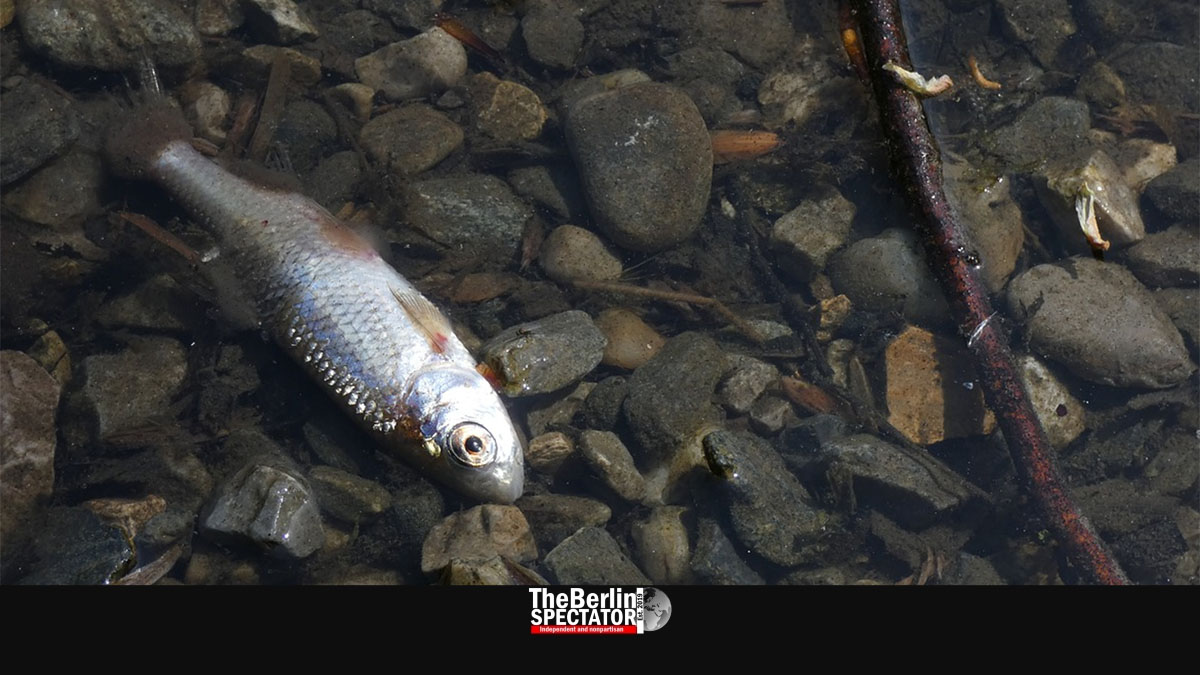 The authorities in Poland have known about the poisoning of the Oder since the end of July. Much later, they informed the public and neighboring Germany. Who or what caused the massive fish kill in the river is still unclear.

Berlin, August 14th, 2022 (The Berlin Spectator) — From its source in Czechia, the Oder river runs to the Baltic Sea. It is 886 kilometers (538 miles) long. Since WWII, part of the Oder marks the border between Poland and Germany. The river was always known for its barge traffic. Anglers used to sit at its bank for hours, when the fish in the river were still alive. In 1996, the three countries along the Oder, Czechia, Germany and Poland, signed a treaty in which they agreed to reduce the pollutant burden on the river.

Twenty-six years later, some two and a half weeks ago, a catastrophe happened. On July 27th or 28th, 2022, someone, or maybe a company, poured poison into the Oder. At first, Poland failed to inform Germany about this ecological disaster, until it became obvious. Countless metric tons of dead fish floated in the Oder. Other animals, including birds that feed on fish, died as well.

Rather late, on August 12th, several German counties and the city of Frankfurt an der Oder forbade swimming and fishing in the Oder. A few days ago, volunteers in Brandenburg started to collect dead fish from the river bank. On Saturday, Germany’s Ecology Minister Steffi Lemke appeared in Frankfurt. The Polish-German cooperation had failed, she conceded. Had it worked, Germany or at least the federal state of Brandenburg would have been informed earlier, the Minister stated.

Today, Steffi Lemke will reportedly meet her Polish counterpart Anna Moskva. They will be talking about a joint expert review of the situation and an exchange of analysis results. In this case, steps that are self-evident in disaster situations like this one apparently have to be discussed. But the Polish authorities are working on identifying the poison that is doing so much damage. The police in the neighboring country are offering a reward for the identification of those responsible.

Rivers flow, including the Oder. The poison it contains is being carried north. Mecklenburg-Hither Pomerania, Germany’s federal state in the northeast, is expecting the poison to reach the Stettiner Haff also known as the Szczecin Lagoon today. Mecklenburg-Hither Pomerania’s Environment Minister Till Backhaus called on residents along the Oder river to refrain from fishing or coming in contact with the water.

His Brandenburgian colleague Axel Vogel told the RBB radio and television network, the Oder contained a high amount of salts. This aspect was “absolutely atypical” and could be related, but more than one factor had probably caused the fish kill, the authorities in Brandenburg believe. These statements were based on the water samples Frankfurt an der Oder takes every day.

In the meantime, Poland’s Prime Minister Mateusz Morawiecki fired the heads of the water and environment authorities. He said he had only been informed about the fish kill on August 10th. The poison were probably poured into the Oder in or near the city of Opole in southwestern Poland.

Berlin: Changes on ‘U-Bahn’ Train Lines 1, 2 and 3 due to Construction Work