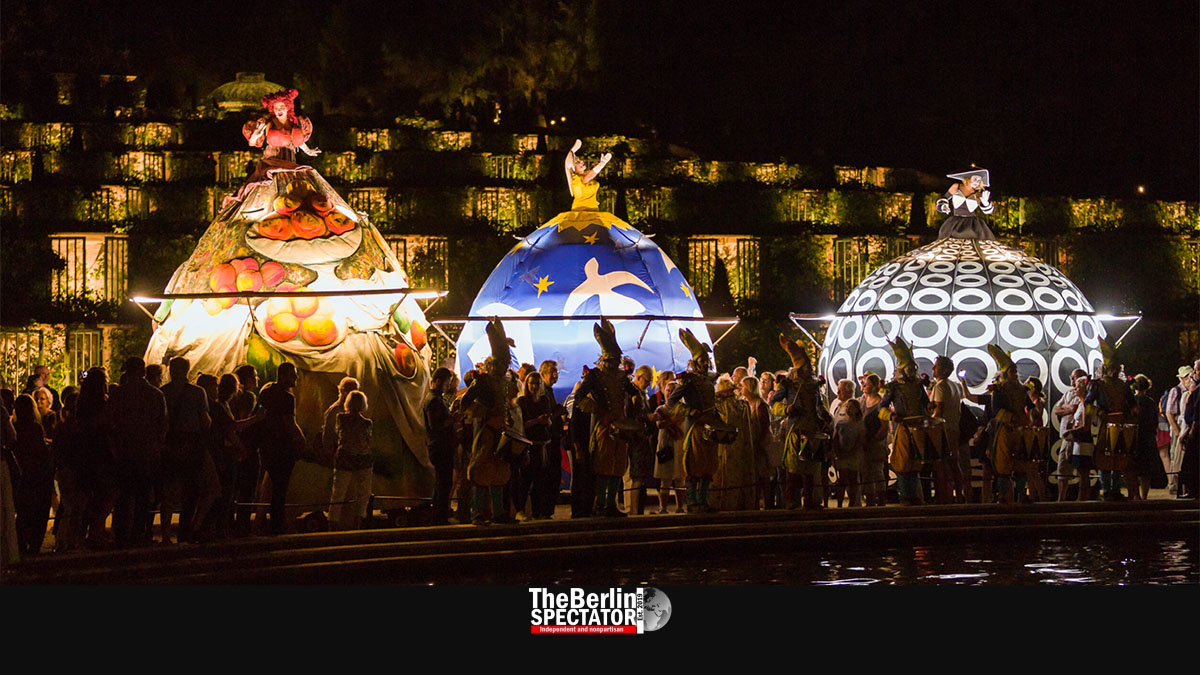 There are many tourist magnets in and around Berlin. One of the most beautiful one is Sanssouci Park in Potsdam with its palaces. Imagine seeing them illuminated in all colors, and experiencing lots of cultural performances there. This is what the Night of Palaces is about.

Berlin, August 16th, 2022 (The Berlin Spectator) — For the 23rd time, the Night of Palaces will attract many people. While Berlin has its Festival of Lights and its Long Night of Museums, which will be taking place soon as well, Potsdam (read separate feature Potsdam: The Cherry on Top of the Tart), the capital of neighboring Brandenburg, is about to illuminate its wonderful palaces and garnish the whole thing with music and other kinds of culture.

“This year’s colorful and creatively organized program which consists of music, artistry, special and festive elements will not only create inspiration and a lot of fun, but also take you to a world full of amazement, joie de vivre and romance”, the organizers promise. Who could resit all of that? Potsdam will definitely be on its feet. But the Brandenburgers also expect lots of Berliners to cross the state border.

Visiting Park Sanssouci is always a good idea, including during the day. Just squeeze through the tourist stampede in order to get a glimpse of Sanssouci Palace itself, but also the other palaces in Sanssouci Park and the landscaped gardens that can be found all over the place. You need an overkill of palaces and greenery? Thank Frederick the Great and take the S-Bahn train to Potsdam. So, you want those lights and all the culture too? Go there on August 19th or 20th, 2022, or both. This is when the Night of Palaces takes place.

From 1747 to 1918, Sanssouci was a summer residence for Prussian kings and German emperors. Since 1990, the place is a UNESO World Heritage site. Those who go there, day or night, will know why. During the upcoming event, a lot of distraction will be offered.

Prominent contemporaries will be reading George Orwell’s “Animal Farm”, Miguel de Cervantes’ “Don Quijote“, Lewis Carroll’s “Alice in Wonderland“, Oscar Wilde’s “The Happy Prince” to audiences in this wonderful setting. There is a downside: They will do so in German. But music is a language we all understand, right? Yes, Park Sanssouci will be turned into a big stage.

Papa Capim, a group consisting of Latin American artists, will deliver all the Samba, Bossa and Forró you need. Carrington-Brown, a British music and comedy duet, is scheduled to be there. The same applies to a similar German act known as ‘Felice und Cortes’. More music and other kinds of performances, a laser tunnel, video projections on those palaces, and all those lights will create a lasting experience. Just don’t think about the fact that Potsdam’s electricity bill will be higher than anyone wants to know.

All details about Potsdam’s Night of Palaces can be found on the event’s website.