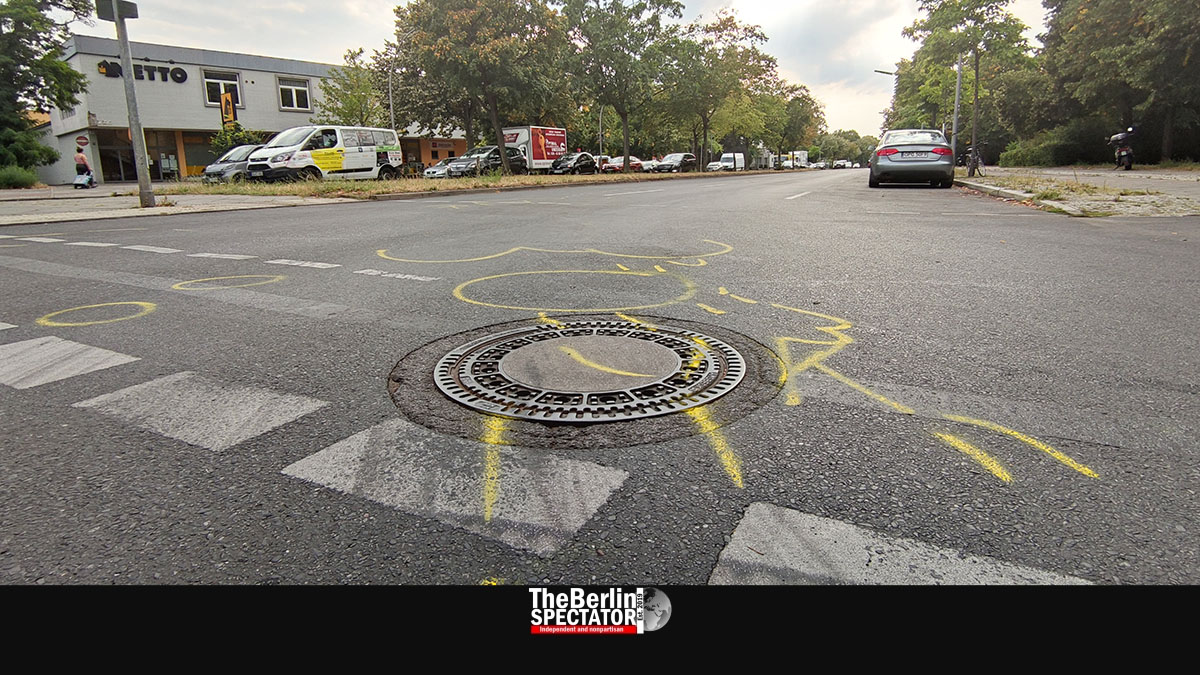 For the sixth time this year, a cyclist was killed in an accident on the streets of Berlin. This time, it happened in Reinickendorf district. It was one of those right turn accidents.

Berlin, August 17th, 2022 (The Berlin Spectator) — The intersection of Techstrasse and Gotthardstrasse in Berlin’s Reinickendorf borough is a relatively quiet spot. Every few minutes, a yellow city bus appears, picks up passengers or drops them off at a stop right in front of the traffic light, before it continues on. The number of cars seen here in this last week of Berlin’s summer vacations is relatively low.

What happened on Wednesday morning, shortly before 8:00 a.m., right here at this intersection, is terrible. A 56-year old cyclist may have been on his way to work when he rode towards the intersection on a bike lane on Teichstrasse. His intention was to go straight ahead, in order to make a left into Gotthardstrasse the lanes of which are divided by a channeling island with a strip of grass.

A huge three-axle truck driven by a 36-year-old took a right turn. Appartently, the man in the driver’s cab did not see the cyclist. They collided, the cyclist was run over. His injuries were so serious that he died right there at the scene of the accident. The driver suffered a shock and needed to be treated by medics.

A blood stain and markings on the street tell the sad story of this incident. They look like the cyclists may have been run over by more than one of the heavy vehicle’s wheels. Also, he may have been dragged along some 10 feet before the driver noticed something happened. The investigation is ongoing.

This year, this is the first deadly right turn accident. In recent years, they have happened numerous times. In these cases, the cyclists have the right of way, go straight ahead and a truck turns right. Because of the blind spot, the driver does not see the cyclist. In some cases, they do not pay attention or take spontaneous turns without signalling, or both. New trucks have to be equipped with sensors that can prevent these accidents from happening.

Today’s victim is the sixth cyclist who died in accidents in Berlin this year. In February, a 81-year-old woman and a man aged 57 lost their lives when they collided with vehicles. In March, a 71-year-old cyclist made a mistake and crashed into a car. He died at a hospital five days later. One of the saddest accidents this year happened on June 30th, when a 5-year-old boy on a bike rode onto the street without looking. He died of his injuries the next morning. On August 4th, an 81-year-old cyclist wanted to make a turn and entered the street where he was hit by a car. He died the next day.