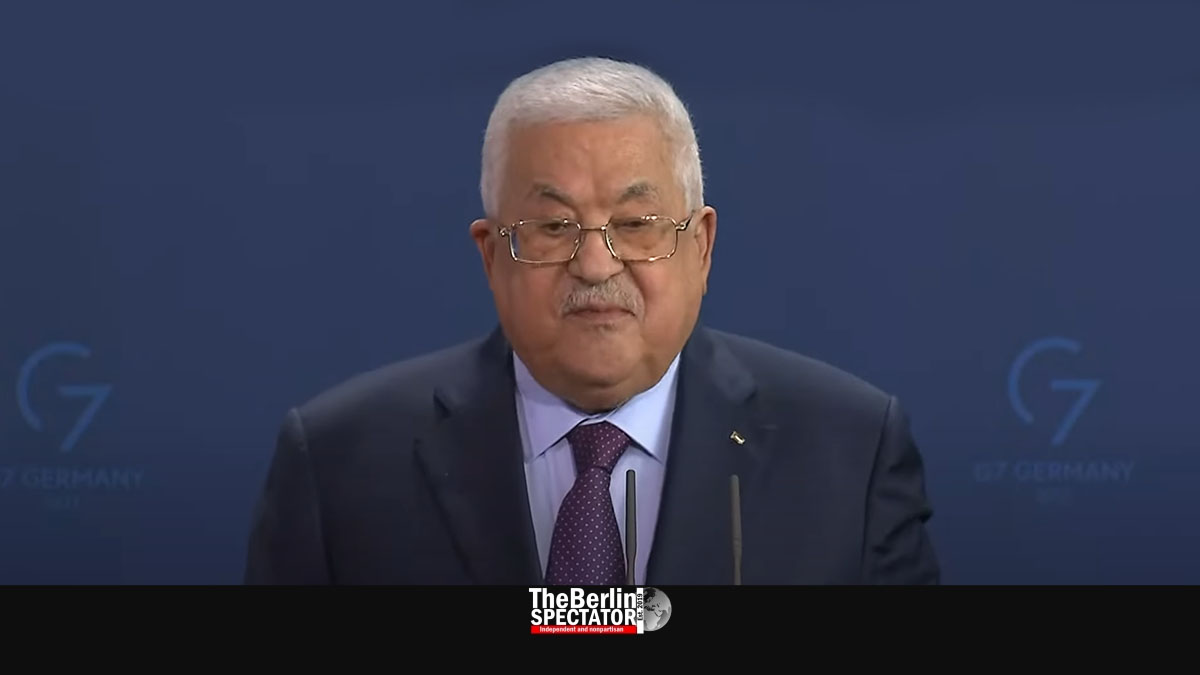 At the chancellery, Olaf Scholz held talks with Mahmoud Abbas on Tuesday. At a joint press conference, the guest from Ramallah accused Israel of having created “many Holocausts” against the Palestinians. Now, there is outrage in Berlin. Many are surprised, even though it is not the first time Abbas spreads conspiracy theories.

Berlin, August 17th, 2022. Update: 3:14 p.m. CEDT (The Berlin Spectator) — On a regular basis, Mahmoud Abbas comes to Berlin. He has met former Chancellor Merkel many times. This time, he held talks with her successor Olaf Scholz. Seventeen years ago, Abbas was elected President of the Palestinian Authority for four years.

At his press conference with Olaf Scholz, Mahmoud Abbas a.k.a Abu Mazen was asked whether he would apologize for the Munich Massacre in which 11 Israeli athletes were murdered by the Palestinian terror group Black September. The question was interesting, also because the victims will be commemorated in Munich during a ceremony on the 50th anniversary of the attack in three weeks from now.

Secondly, Mahmoud Abbas himself was implicated in the terror attack. Abu Daud, the mastermind of the Munich Massacre, once said Abbas had known about the attack in advance and supported it financially when he had been chief financial officer of the PLO led by Yassir Arafat. Later, Daud retracted this statement, but it was never completely forgotten.

Abbas’ answer to the question he was asked in Berlin did not include the Munich Massacre at all. “Since 1947, Israel has committed 50 massacres in 50 Palestinian places”, he said, and accused Israel of “killing Palestinians every day”. Afterwards, Olaf Scholz was criticized by some German-language media because he did not comment on the scandalous statement immediately. But he did so shortly after and was visibly upset.

Scholz told the ‘Bild’ publication, a relativization of the Holocaust was “intolerable and unacceptable to us Germans”. He also criticized Mahmoud Abbas for accusing Israel of having set up an “Apartheid System” which did not serve the security or safety in the region. A statement of this kind, especially from Abbas, who openly admits his organization pays salaries to terrorists who murder Israelis, is scandalous indeed. But it should not have been a surprise.

Abbas is known for spreading conspiracy theories and causing scandals of this kind, both on his home turf and in Europe. For example, he did so at the European Parliament in 2016, when he said Rabbis in Israel had told their government to “poison the Palestinians’ water, to kill them.” With statements like this one, Abbas regularily takes his mask off. Hundreds of years ago, in the Middle Ages, Jews were accused of poisoning wells. That way, the hatred against them was fueled. The President of the PA used one of the oldest antisemitic narratives.

The accusation of massacres against Israel is ridiculous. Since the country’s foundation, Israel has been forced to defend itself against wars its neighbors started and terror attacks in which hundreds of Israeli civilians were murdered. When Israel reacts by targeting terrorists and their infrastructure in Gaza, the IDF (Israeli Defense Forces) do everything they can to avoid civilian casualties, as American and British military experts have confirmed many times.

Support by the E.U.

Obviously, the ‘Apartheid’ accusation is just as wrong as the stories about massacres or poisoned water. More than 20 percent of all Israelis are Arabs (‘Israeli Palestinians’) who have the same rights as everyone else. In the democratic state of Israel, Arabs have far more rights than in any of the many Arab countries in the region. On the other hand, there are no Jews in Gaza. Israeli Jews who just enter Palestinian areas have to fear for their lives.

In spite of Abbas’ scandalous statements, salaries the PA pays to “martyrs”, the antisemitc indoctrination of children in the Palestinian areas and the exploitation of poor Palestinians by their own leadership, the European Union and Germany support the PA with millions of Euro on a regular basis.

In the late morning, Josef Schuster, the President of the Central Council of Jews in Germany, commented. He said he was appalled by Abbas’ statement in which he had relativized the Shoah and Nazi Germany’s extermination policy. Statements of this kind could not be left uncommented, especially at the chancellery. What had happened yesterday was scandalous, Schuster said. He also slammed Abbas for failing to condemn the Munich Massacre.

Israel’s designated Ambassador to Germany Ron Prosor said Abbas’ statement reminded him of his dissertation in which he had denied the Holocaust. It was also in accord with the “malicious campaign against Israel and the Jewish people on all levels and in all of the Palestinian government’s institutions, its education system and society.”

On Wednesday afternoon, government spokesman Steffen Hebestreit said Chancellor Scholz regretted not having reacted right there, at the press conference. But he added it had been his own fault. As the spokesperson, he should not have ended the press conference this quickly after Abbas’ statement. That way, Scholz would have had the chance to say something.