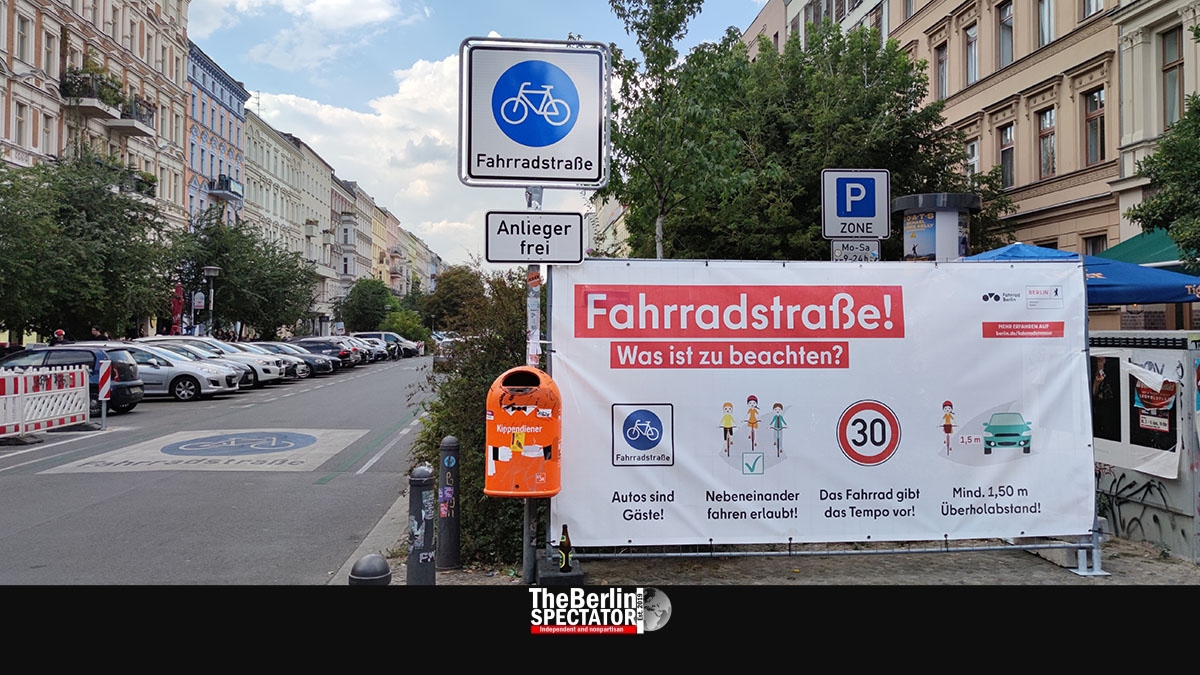 Berlin’s traffic transition is moving ahead slowly. Now, there is a new bicycle street in Pankow, but many motorists do not seem to know what that means. This week, the modern day cavalry was busy writing traffic tickets.

Berlin, August 18th, 2022 (The Berlin Spectator) — In the city state of Berlin, the Mobility Law is supposed to “make mobility more climate-friendly and safer”, according to the Senate. The German capital will be quieter and “even more livable”, the politicians behind the project say. ‘Vision Zero’ is also part of the plans. Nobody should die on the streets of Berlin, like yesterday, when a cyclist lost his life under a heavy truck in Berlin’s Reinickendorf district.

The traffic transdition is supposed to give pedestrians and cyclists more room, which automatically means motorized traffic will have less. An extensive network of modern bike lanes and bicycle highways will be installed. So far, there are more words than deeds, also because of lengthy plan approval procedures and other aspects that make things complicated. Germany is generally good at slowing things down because of its regulations overkill.

Located in Berlin’s northeastern part, the Pankow borough now has one new bicycle street. Oderberger Strasse was converted accordingly earlier this week. In bicycle streets, cyclists have the right of way. They dictate the speed at which the traffic may move and they may ride next to each other even when there are motorized vehicles behind them. Only residents are allowed to enter bicycle streets with cars.

Headed by the Green Senator Bettina Jarasch, Berlin’s Senate Administration for Mobility knows many motorists in the city do not know what a bicycle street is. Or maybe they do not want to know. That is why it made sure huge banners were hung up at all entrances to Oderberger Strasse. On them, the rules are listed: 1. “Cars are guests.” 2. Riding next to each other is allowed. 3. The speed limit is 30 km/h (19 mph) and cyclists decide at what speed they want to ride at. 4. Motorists need to keep a distance of at least 1.5 meters (5 feet) to cyclists.

The problem is that far too many motorists do not seem to know how to read, or they just do not care. Earlier this week, the modern day cavalry was in the new bicycle street, members of the Berlin Police Department’s bicycle unit. The two cops on bikes were very busy because some ignorant motorist entered the street every few minutes. “Do you live here?” is the first question the officers asked the drivers. In most cases, they say no. These poor cops probably had cramps in their fingers when they were done writing all those tickets.

“How much clearer can signs be?”, one of the policemen asked. He told the Berlin Spectator people just did not pay attention, just before he had to ask yet another motorist where he lives. Another ticket needed to be written. Bikes and residents only. No exceptions. The cop conceded business owners in bicycle streets were complaining because the lack of through traffic decreased their income.

Just a few blocks from Oderberger Strasse, in Grellstrasse, workers started installing modern bike lanes on the street marked by green surfaces. This is one more tiny step towards the traffic transition especially the Berlin Greens are trying to implement. No giant leap has been registered so far.