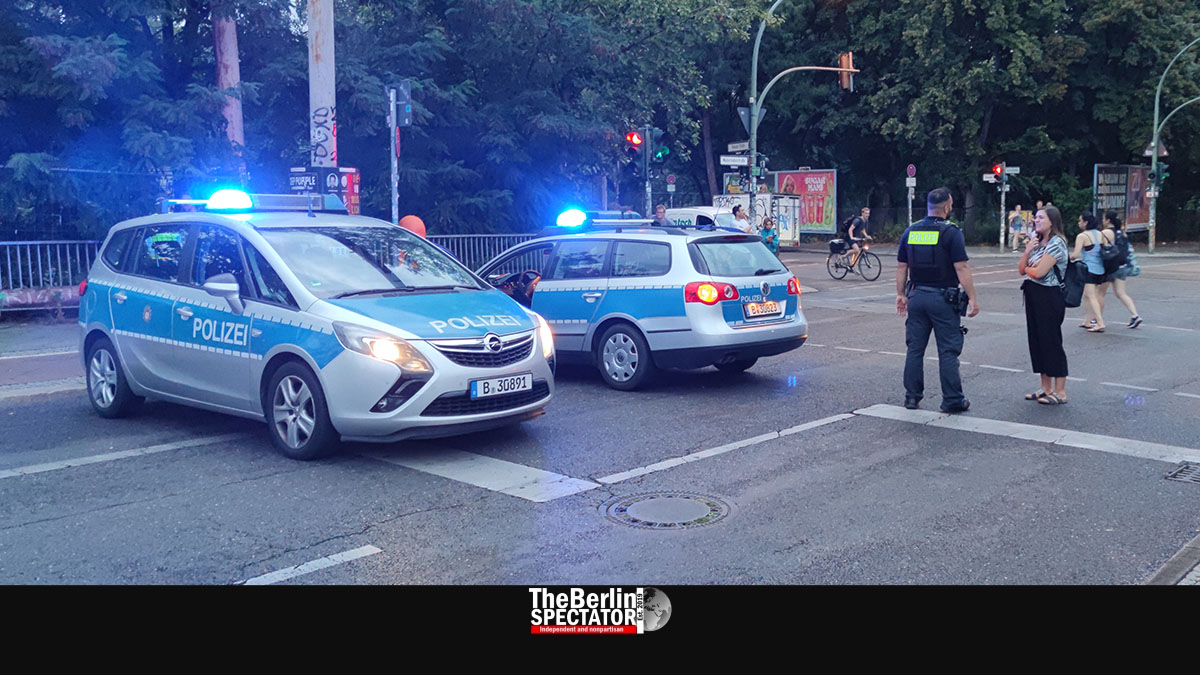 In Berlin, the police evacuated thousands of people in the Friedrichshain borough because a large WWII bomb was found at a construction site. It took hours to get everyone out of the danger zone. In the late evening, experts began dealing with the explosive. The job was completed after midnight.

Berlin, August 18th, 2022. Update: August 19th, 2022, 06:06 a.m. CEDT (The Berlin Spectator) — In Berlin, the Police Department evacuated some 12,000 people around a construction site located at the intersection of Persiusstrasse and Bödikerstrasse in the Friedrichshain borough on Thursday evening, because of a bomb find. An area with a radius of 500 meters (0.3 miles) had to be vacated and cordoned off.

It is not the first time an unexploded WWII bomb was found in Berlin, and it will not be the last time either. But, usually, Ostkreuz, one of Berlin’s largest train stations, is not part of the danger zone. In the afternoon, trains and other means of transport were still moving in the area, but did not stop at Oskreuz. From 9:00 p.m. until 12:15 a.m., all traffic was banned. Several ‘S-Bahn’ city train lines were affected, including the S3, S5, S7, S8, S9, S41, S42 S75 and S85.

According to the Berlin Police Department, 250 officers were on site. They went door to door to inform people they had to leave their homes. Through loudspeakers mounted on police vehicles, announcements were heard in the neighborhood. Berlin’s bomb disposal unit was ready to do its job, but could not disarm the bomb until the entire area was vacated. Firefighters and medics helped sick and disabled people by transporting them to other locations.

At 8:00 p.m. local time, a spokeswoman for the police told The Berlin Spectator it would take another hour to complete the evacuation, and another two until the experts could start defusing the bomb. Shortly after midnight, the police announced the bomb was defused. Everyone could return home. Heavy rain and a thunder storm was not helpful in this situation.

Dozens of evacuated residents had waited in parks around the danger zone. One man complained he needed to go to work in the affected area. A Syrian family father told our reporter he wanted to get his car out of the zone to let his kids sleep in it, but the police did not let him. People understood the need to evacuate, but many were annoyed anyway.

Some residents who did not have the opportunity to stay with relatives or friends outside the danger zone were taken to Mercedes Benz Arena. In the early evening, the police said 80 out of 12,000 evacuees had accepted the offer. A separate area for persons who are infected with Corona was set up there as well.

The district authority helped people in need. So did the Red Cross and the Berlin Fire Department. The danger zone was located between Ostkreuz, Modersohnstrasse and the Spree river.

The WWII bomb weighs 500 kilos (1,102 pounds). According to the Police Department, it had two fuses. Both were removed mechanically. Afterwards, the explosive was transported to the bomb disposal site in Grunewald forest which was on fire until a few days ago.