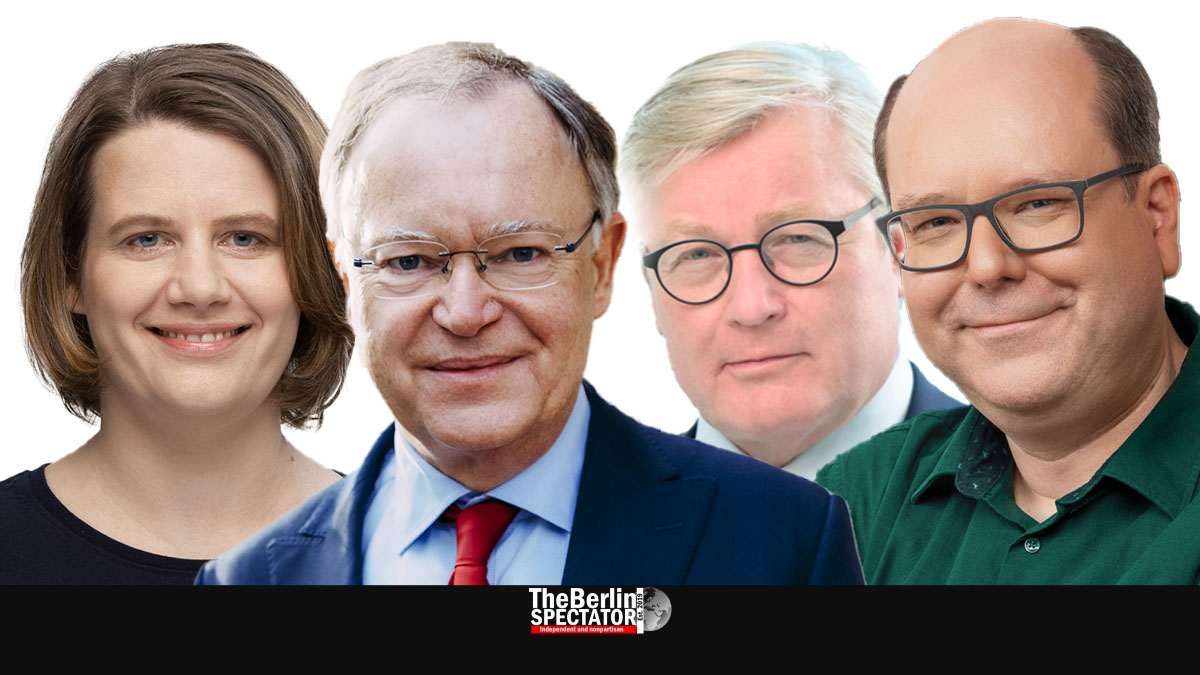 In Hanover, the Social Democrats are determined to head the next government too. But the Christian Democrats are closing in on them, and the Greens, who might triple their last results, are a big player as well. Welcome to Lower Saxony.

Berlin, August 19th, 2022 (The Berlin Spectator) — Lower Saxony has had some interesting First Ministers or Governors. The Germans call them ‘Minister Presidents’. One of them was the late Ernst Albrecht, E.U. Commission President Ursula von der Leyen’s father. The conservative Christian Democrat ruled the state for 14 years, longer than anyone else. Back then, he tried to have two nuclear waste disposal sites built in Lower Saxony as well as a reprocessing plant and a nuclear reactor. This did not exactly go down well with the predecessors of the Greens who fought nuclear power back then.

Later, Gerhard Schröder took over. He was in office from from 1990 to 1998, when the Social Democrat became Chancellor in Berlin. Today, nobody even wants to hear his name because he keeps on defending the war of aggression his friend Vladimir Putin is waging against Ukraine. The third very prominent First Minister of Lower Saxony was Albrecht’s party colleague Christian Wulff, who later became Federal President but had to step down due to an alleged scandal. It was about accepting advantage, but a court acquitted him later.

Americans would call Lower Saxony a swing state. Sometimes it is governed by First Minister Stephan Weil’s center-left Social Democrats (SPD), and sometimes by the center-right Christian Democrats (CDU). According to polls, things looked pretty good for the SPD until March of this year, when they were 9 percent ahead of the CDU. Since, the conservatives and their main candidate Bernd Althusmann have been coming closer and closer.

Althusmann is Commerce and Labor Minister in First Minister Weil’s grand coalition. In 2017, he already was the CDU’s main candidate and lost. His party got 33.6 percent of the vote while the SPD scored 36.9 percent. Since, both parties have lost support. According to the latest Infratest/Dimap poll commissioned by the NDR radio and television network in early July, they stood at 27 and 30 percent, respectively.

The extremist right-wing AfD will likely make it back into the state parliament in Hanover with around 6 percent, the center-right FDP might be a little stronger than that and the far-left ‘Die Linke’ could fail to surpass the 5-percent threshold again. But there is yet another party, one that has good chances of becoming the winner of the election night on Sunday, October 9th, 2022, namely the Greens. The polls show they might triple their 2017 result. Back then, they reached 8.7 percent. Now, they might get 22.

Governor Weil and his SPD want to keep Lower Saxony “in good hands”, with “a govermment experienced with crises, one that acts quickly”, one that brings change and makes sure there is progress, with “one of the most popular First Ministers”. This is how the SPD sells its superstar. Weil and his people say they want “an economy everyone benefits from”, an education system with “chances for everyone” and “a security that strengthens everyone”.

His junior partner, the CDU, came up with an election program that does not sound very different. They want “a strong economy for safe jobs”, intend to put children and education in the center of their attention and improve the health system. The main candidates the Greens are sending into the race, Julia Willie Hamburg and Christian Meyer, are promising more modern day windmills, solar panels on roofs, support for families and a “sustainable rebuilding of the business location Lower Saxony”.

The election race will officially begin when the voters are back from their summer vacations next week. In Berlin, the HQs of the parties involved are planning on sending prominent faces to Hanover and the rest of Lower Saxony, to convince people at election campaign rallies.