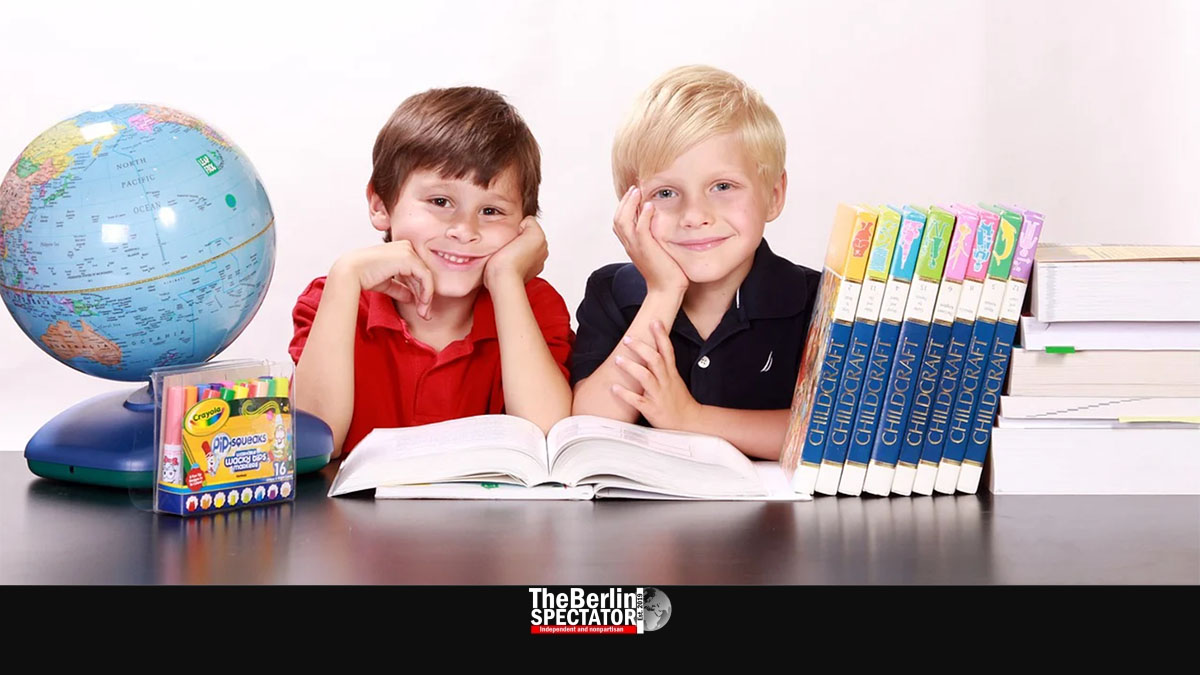 According to Berlin’s Senate Administration of Education, the new school year was prepared well. But there are several challenges. An increase of the number of students is one of them. There have not been this many new first-graders in decades.

Berlin, August 20th, 2022 (The Berlin Spectator) — Everyone is back from the beach. Berlin is filling up again. Traffic will be hell on Monday, when the city’s 827 schools are back in business. Sound the alarm! Dear teachers, are you ready to rumble? You probably read the 41-page pdf file the Senate Administration of Education sent to you to educate you about the rules for this new school year, right?

“The Corona pandemic is not over and requires a high level of flexibility from you”, the document reads. For now, there is no mandatory mask rule for schools, neither in the classroom nor on the schoolyard. Both students and teachers may wear masks voluntarily, the Senate Department stressed. Neighboring Brandenburg province chose the same approach. In Berlin, 23,000 air filters were installed in just as many classrooms. So, what could possibly go wrong?

If things go south in spite of all the optimism, the compulsory mask rule could return, from grades 5 to 12. The Senate Department in charge says this would be the first measure that would be taken in a deteriorating Corona situation. For now, there are no mandatory Corona tests either. But all students and teachers can get themselves tested voluntarily twice per week and once during weekends. Twenty-seven million Corona test kits are available.

So far, Corona and school closures have messed up two school years. This time, the schools are supposed to remain open at least most of the time. All kids need to go to school every day. Online classes mostly are a thing of the past. This applies to both Berlin and Brandenburg. There are no restrictions for sports and music classes anymore, in both federal states.

Exactly 342,810 schoolkids will be taught at Berlin’s state schools, 6,000 more than last school year, and another 41,000 at private schools. The new firstgraders can relax for another week. At most schools, their first day of school is August 29th, 2022. Some of them have organized enrollment ceremonies on Saturday, August 27th. The number of firstgraders increased by 2,000 to 37,030, compared to last year.

Apart from Corona, there are two more crises that are affecting the schools too. Because of Vladimir Putin’s war of aggression against Ukraine, there are energy issues. In secondary schools, the temperature in classrooms is supposed to be decreased to some extent during the cold season, to save energy. But nothing will change, in this regard, at kindergartens and primary schools.

The refugee crisis caused by the same President and the very same war is another challenge especially Berlin needs to deal with because it accommodates far more Ukrainian refugees than any other German city, including schoolkids. Before the summer vacations, almost 5,000 Ukrainian children were taught at Berlin’s schools. Now, there will be 6,000. According to the Senate Administration for Education, the districts have been busy creating capacities for them.

There are schools at which some subjects will be taught in both German and Ukrainian. German classes for Ukrainian students are being offered too. Two schools, namely the Helene-Lange-Schule and the Hermann-Ehlers-Gymnasium teamed up to create a German-Ukrainian school for grades 7 and 8 at the Steglitz-Zehlendorf Campus. The Aziz Nesin Primary School in Kreuzberg prepared classes in Ukrainian as well.

Another problem Education Senator Astrid-Sabine Busse and her people dealt with is the lack of teachers. More than 1,600 new ones were employed for this school year. Some 450 career jumpers are among them, people who studied the subjects they will teach, but who have not had teacher training. Pensioners, former teachers, were brought back to Berlin’s schools.

In Germany, the digitization usually lags behind, in all areas, including the education system. The Senate Administration tried to make some headway here too. Yet another issue is the lack of space. In the next four years, Berlin intends to create room for additional 31,200 schoolchildren and their teachers. Since 2016, billions of Euro have been invested into extending existing schools.