Scholz to Ukrainians in Germany: ‘You Are Among Friends’ 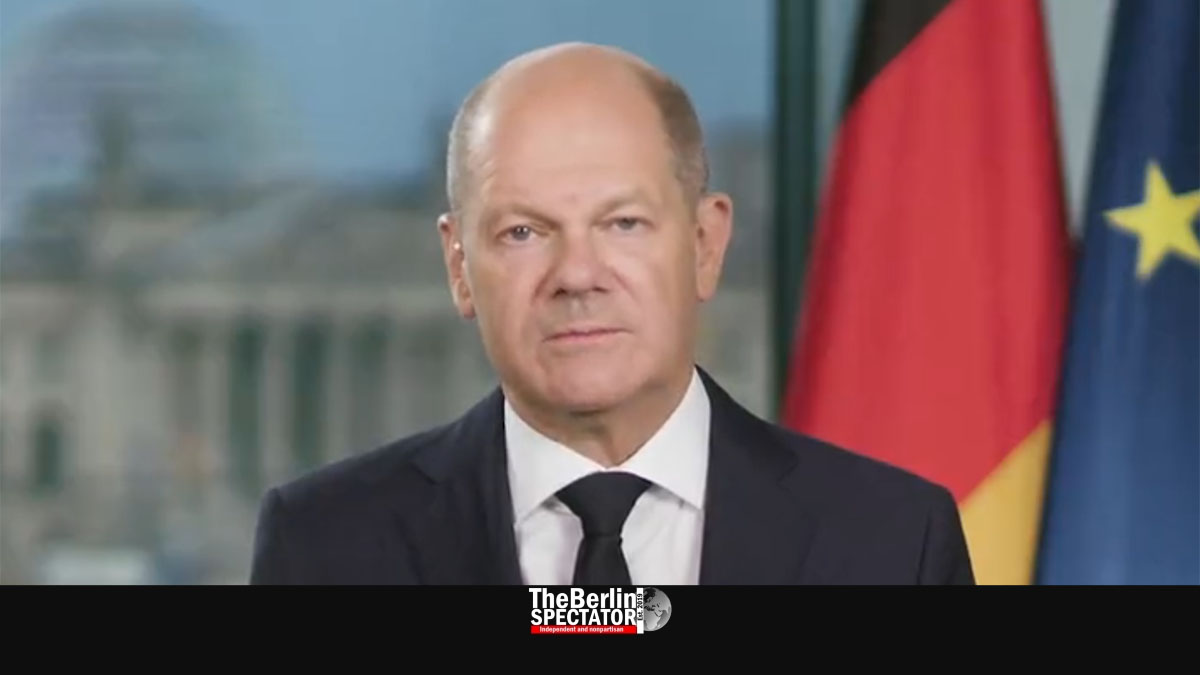 On Ukraine’s Independence Day, Olaf Scholz promised the Ukrainian people more help from Germany. He said freedom, the rule of law, pluralism and democracy were being defended in Ukraine today. Almost one million Ukrainians are in Germany right now.

Berlin, August 24th, 2022 (The Berlin Spectator) — In a speech spread as a video file in social media, Olaf Scholz congratulated Germany’s “dear friends in Ukraine” and the thousands of “dear Ukrainians in Germany” on their country’s Independence Day. “This should be a happy day of concerts, picnics and parades under a blue summer sky”, the Chancellor said. “But the dark shadow of the brutal Russian war of aggression weighs heavily, on this August 24th, exactly six months after it began.”

“I will never forget my visit to war-torn Irpin”, the Chancellor told the Ukrainian people. “Our thoughts are with those who currently live in Ukrainian territory occupied by Russia, who have to endure a lot of suffering in Crimea, in the Donbas region, Kherson or in Zaporizhia Oblast, where Cussack culture was born. And our thoughts are with the heroes of Ukraine who have been defending their country bravely, against the brutal aggressor, for six months now. Their courage impresses all of us.”

Olaf Scholz announced he would meet some Ukrainian soldiers on Thursday. They are among those who are being trained in the use of air-defense tanks by the Bundeswehr, Germany’s armed forces, in the Federal Republic right now. “These are tanks we are delivering to Ukraine”, he said. “We will continue sending weapons, including self-propelled howitzers and air defense systems, month after month.” The Chancellor also stated Germany would continue to provide training to Ukrainian soldiers, in order to make sure they were ready to use Europe’s most modern weapons.

According to the Chancellor, who was criticized harshly for not doing more even though Germany has supported Ukraine substantially for a long time, the sanctions against Russia will continue. So will the Federal Republic’s help for Ukraine. The attacked country will receive more financial support, and help for the rebuilding of destroyed towns and villages. On top of it all, Germany will continue treating injured Ukrainian soldiers at its hospitals and help transporting Ukrainian grain to ports in Europe. “Our borders and our hearts remain open to those who are forced to flee the terror imposed on them by Russia.”

Scholz said almost one million Ukrainains had come to Germany in the past months. More than 150,000 girls and boys from Ukraine were attending kindergardens and schools here. He stated he could imagine how much they missed their homeland and their fathers and brothers who had stayed behind, in Ukraine. “I want you to know that, here in Germany, you are among friends and warmly welcome”, Scholz said.

“Neighbors help each other in times of need”, he continued. “Therefore, Germany firmly stands by Ukraine’s side in this hour of danger, today and as long as Ukraine needs our support.” Values that defined Europe, such as freedom, the rule of law, pluralism and democracy, was being defended in Ukraine today.

The German head of government also announced a rebuilding conference that will take place in Berlin in October. A path for Ukraine’s future would be developed at the event. Europe, united in freedom and democracy, was “a lot stronger than Russia’s backward-looking imperalism”, Scholz said. “You country will cast of the dark shadows of war”, he told the Ukrainians. “Because it is strong and courageous, and because it has friends in Europe and elsewhere. We are proud to be part of them, today and in our mutual European future. Slava Ukraini!”