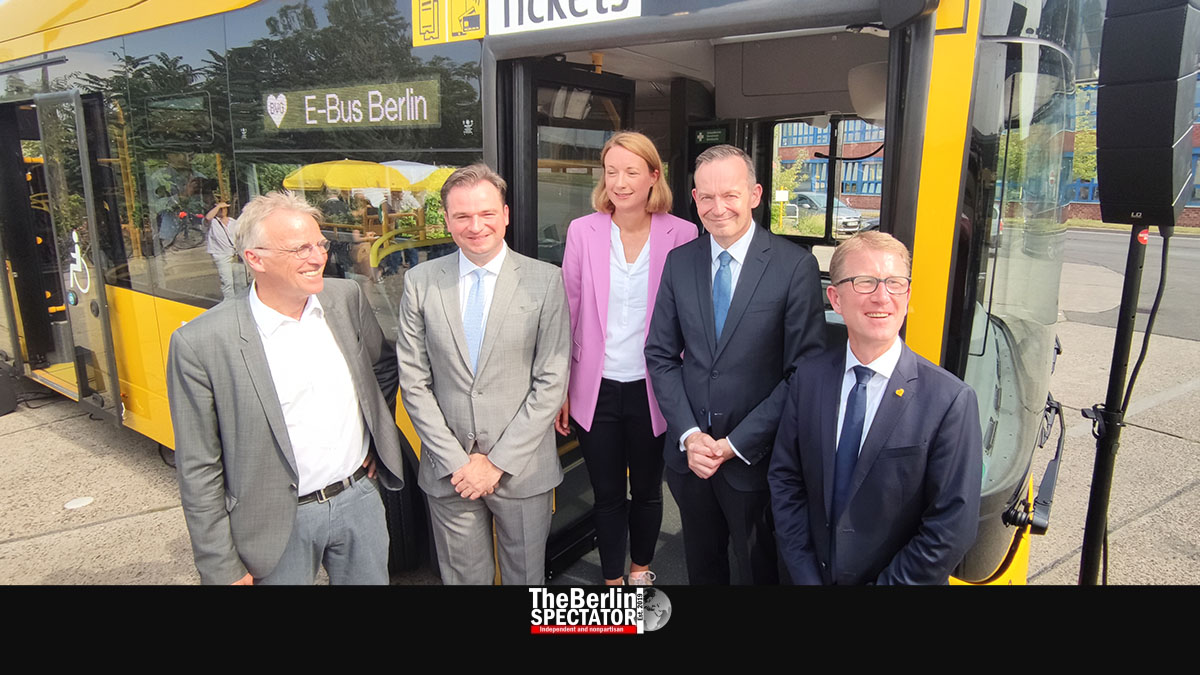 In Berlin, the public transport provider BVG is in the process of converting its bus fleet. In 8 years, all 1,400 vehicles are supposed be be electric. The newest bus the Berliners got was made in the Netherlands. It is a giant leap for mankind because of its range.

Berlin, August 26th, 2022 (The Berlin Spectator) — Berlin’s BVG is on a big shopping spree. Replacing 1,400 stinking Diesel buses with electric ones requires action and deep pockets. Of course, the Berliners want the best their is. They found it Deurne in the neighboring Netherlands. Here, the company Ebusco builds what its name already suggests, namely electric buses. A big order was placed there.

The first Ebusco bus in the BVG’s stylish yellow just arrived in Berlin. It is part of an order of 90 vehicles that are supposed to be delivered until the end of December. Rolf Erfurt, a member of the executive board of the state-owned company, told The Berlin Spectator the new electric bus had managed to cover the 637 kilometers (396 miles) from the Ebusco factory in the Netherlands to Berlin without any recharging breaks.

According to Erfurt, its range of about 290 kilometers (180 miles) in the city was one of the reasons the order with Ebusco was placed. Other e-buses the Berliners are using can only do 150 kilometers (93 miles) before they have to be connected to the charging stations again. (Note: If you are reading this on a website other than berlinspectator.com or its newsletter, this is copyright infringement.) But the other manufacturers were making headway in thus regard too, he added. Erfurt, who just got his own bus driver’s license, obviously liked sitting on the sleek Dutch product’s driver’s seat.

The Ministry of Transport paid part of the bills for the 240 electric buses the BVG will own when this year ends. That is why Transport Minister Volker Wissing came to see the Ebusco vehicle at the BVG’s bus depot in Weissensee today. He said Germany was taking it’s climate goals seriously. So far, his Ministry had co-funded 1,700 electric buses in Germany. Wissing was part of a test drive on the premises because he got back into his Diesel-propelled Audi A8 that took him back to the Ministry.

According to State Secretary Meike Niedbal from Berlin’s Senate Administration of Mobility, who was the event as well, all of the BVG’s buses are supposed to be electric by the end of this decade. It was important to decrease Berlin’s CO2 emissions as quickly as possible. Ebusco’s CEO Peter Bijvelds stated he was proud his products would now be used in Berlin.

The first 90 Durch buses are supposed to be added to the lines 300 ,147 and 142, but many more other electric vehicles already are part of the lines 100, 200 and 300. At the depot in Weissensee, lots of loading stations are already in service. The Ebusco buses will not need them quite as often as the German and Polish e-vehicles the BVG is using. Still, more loading stations will be put in service any day now.

Last year, the last Diesel buses the Berliners ordered were delivered. They are double deckers made in Scotland. The BVG must have gotten a big rebate. Otherwise, they probably would not have purchased them because Rudolf Diesel’s invention will be obsolete here soon. Since the amount of available power is limited and there are so many electric buses by now, only a certain number of them can be charged at the same time. Maybe the BVG should build its own nuclear power plant up there in Weissensee.