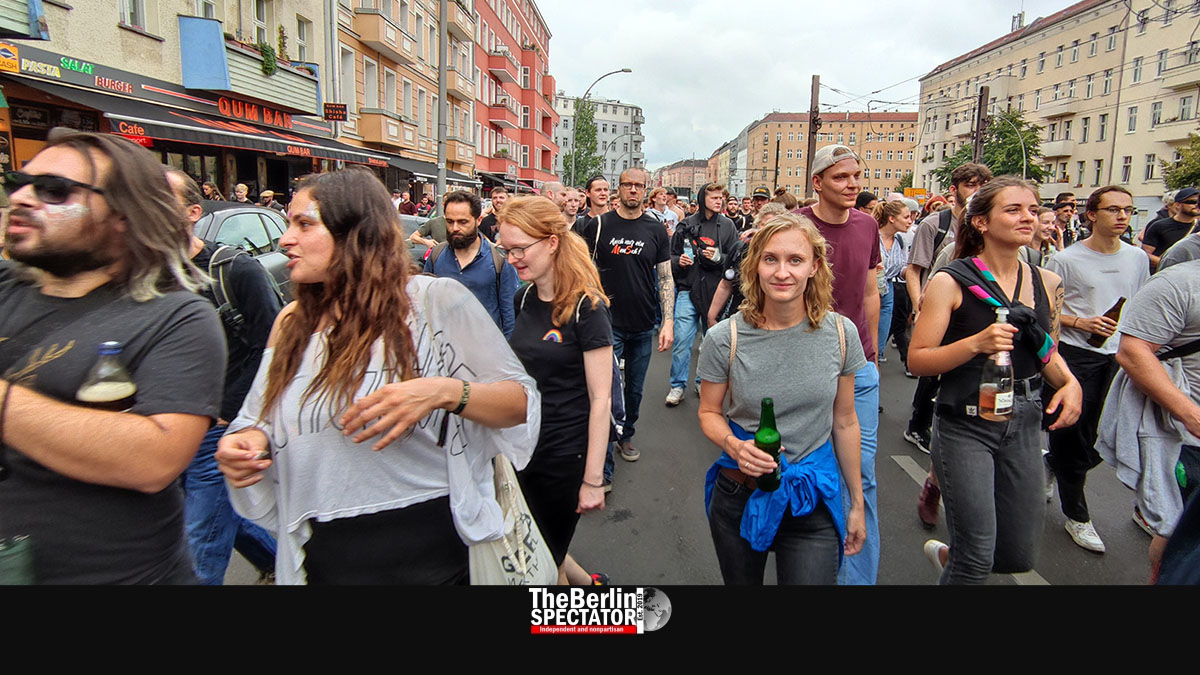 In Berlin, yet another Techno parade took place on Saturday. Luckily, the heavy rain that had been forecast for the afternoon was delayed. Berlin’s police and city cleaning department did a good job.

Berlin, August 27th, 2022 (The Berlin Spectator) — Less than two months after ‘Rave the Planet’, a modern day ‘Love Parade’, yet another Techno procession moved through Berlin on Saturday. A few thousand participants followed 14 trucks loaded with huge loudspeakers. DJs played beats while the crowds danced and drank. Some dancers were half naked. Others wore fancy dresses or came in jeans.

Another thunderstorm and heavy rain almost messed up today’s Techno parade entitled ‘Zug der Liebe’ (‘Procession of Love’), but somehow the bad weather stayed in neighboring Brandenburg, at least in the afternoon. The love for beats was obvious. Police officers with decibel meters made sure the volume was not turned up even more. Even at legal levels, it made the ground shake. Both the organizers and the Berlin Police Department did a good job.

The Techno dancers moved through several big intersections, including the one of Greifswalder Strasse and Danziger Strasse, two of Berlin’s more important traffic arteries. First, when the procession still was about a mile and a half away, cops on motorcycles and on foot monitored the situation. At some point, they closed the southern part of the intersection. Some of the motorists who got stuck were allowed to reverse and bypass the big mess on small streets, but they got crammed too.

Then, many more police officers showed up, just ahead of the Techno dancers. Some 20 minutes later, the last parade participants cleared the intersection on their way towards Berlin’s Kreuzberg borough. This was the moment for the city cleaning department. About 20 of its employees with brooms and big cleaning vehicles were right behind the ‘Procession of Love’. They had to clean up all the love in the form of beer bottles and cigarette butts the dancers threw all over the place. This strategy seemed to be very effective. An ambulance followed the Techno party people too.

Just like ‘Rave the Planet’, the ‘Procession of Love’ wants to make people aware of the importance of club culture. The other purpose is to be together, dance and party, the kind of activies so many young Berliners engage in at clubs and parks all the time. Berlin is known as a party capital. It attracts people from all over Europe for that reason. During the first part of the Corona crisis, when all clubs were forced to shut down, things were difficult for party people, but everyone else too.

In early July, ‘Rave the Planet’ was sold as the successor of the legendary ‘Love Parade’ that took place until 2010. At its last edition in Duisburg, 21 participants died in a stampede. Afterwards, a long break was taken. Because ‘Love Parade’ title is owned by someone, different names are used for the same thing, including ‘Rave the Planet’ and ‘Zug der Liebe’.