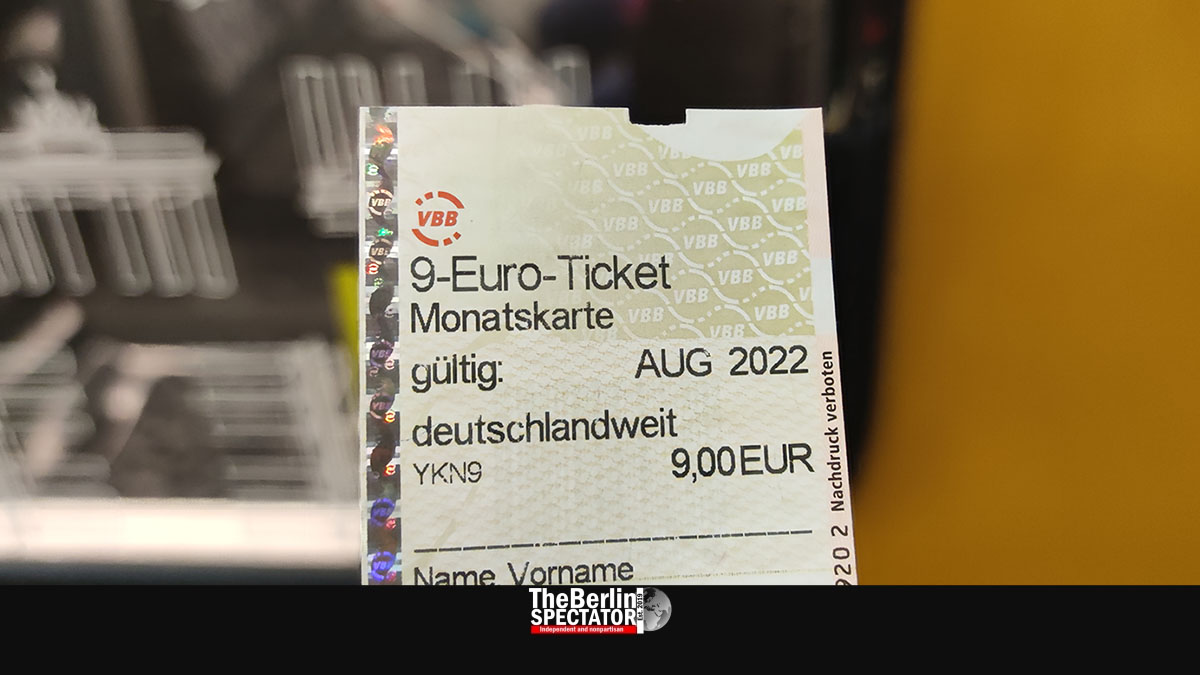 Only days before Germany’s 9 Euro Ticket expires, the federal government and the government coalition in the city state of Berlin announced new offers. But there are many open questions. One thing is certain: The 9 Euro Ticket 2.0 will be different.

Berlin, August 27th, 2022 (The Berlin Spectator) — Tens of millions of 9 Euro Tickets were sold and used in Germany. It gave its holders the right to travel on any regional train to any destination in the country and to use public transport in any city or region. Chancellor Olaf Scholz’ government coalition offered the ticket for three months, from June to August, as a reimbursement for the extremely high energy prices.

On September 1st, ticket and subscription prices will bounce back to their normal levels. Nine Euro (8.97 U.S. Dollars or 7.64 Pounds Sterling) will just cover a day ticket in one German city. To many Germans, it might be frustrating to go back to normal in this regard. There are those who will not be able to afford monthly tickets for regular prices, especially after they pay their astronomically high natural gas or gasoline bills.

Now, Berlin’s Governing Mayor Franziska Giffey launched an initiative. On Friday evening, the Social Democrat (SPD) and her coalition partners from the Greens and ‘Die Linke’ agreed on offering an affordable ticket in Berlin, possibly from October 1st, 2022. Whether this ticket deserves to be called 9 Euro Ticket is unclear, also because it might cost more. Besides, it will offer less.

Berlin’s special ticket is supposed to bridge the time in which the federal government does not offer a new, affordable ticket. On Thursday, Chancellor Scholz announced a new ticket offer that would be available soon. He said it would not be the same, due to cost concerns, but the idea of being able to use one ticket for the public transport in all of Germany might survive.

In the city state of Berlin, open questions remain. How much will the new 9 Euro ticket be? Will it actually cost 9 Euro or will it have to be called 15 Euro ticket or 30 Euro ticket? Where will it be valid? So far, the idea is to sell it for the public transport areas A and B that cover the entire city. At this stage, the cheapest version of Berlin’s regular monthly tickets cost at least nine times more than the 9 Euro Ticket.

Berlin’s Transport Senator Bettina Jarasch said the federal government would have to offer something first. Then, the federal state of Berlin could come up with something to bridge the gap. She made clear this was about offering “an affordable and permanent solution.”

Whatever the federal government and the Berlin Senate might decide, the month of September will be expensive in many ways. This includes public transport tickets and gasoline, because the government’s fuel rebate expires on August 31st as well.

Check out all of our features and articles about the 9 Euro Ticket.