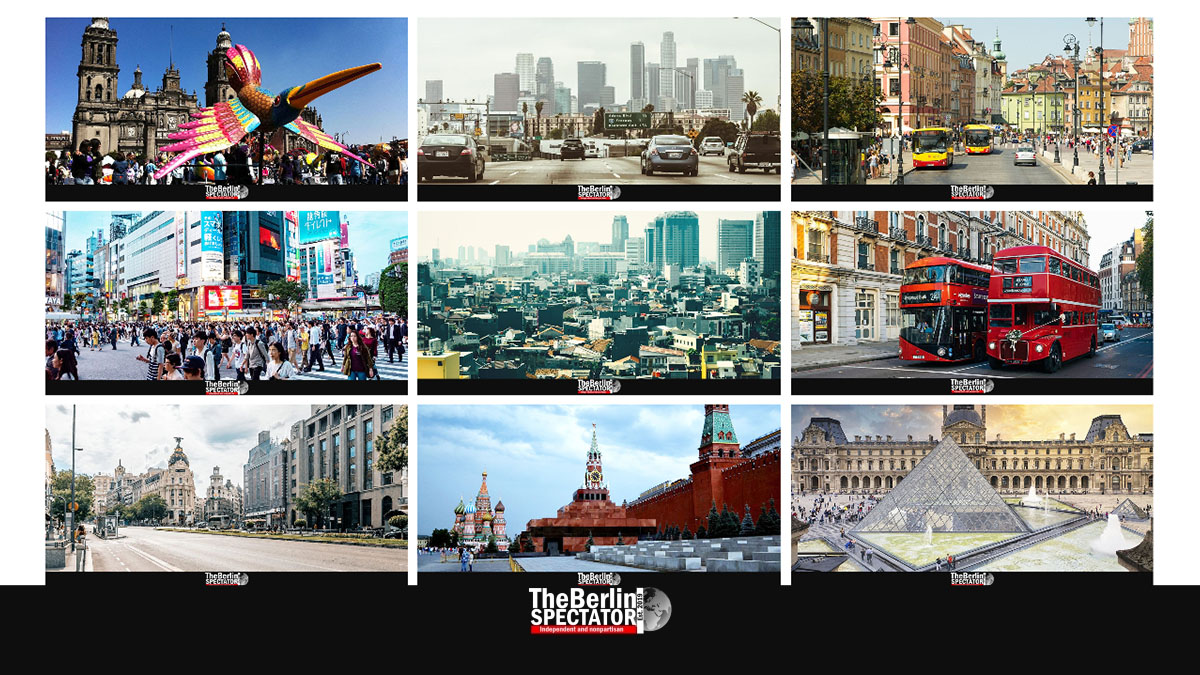 Since 1967, West Berlin and the reunited city of Berlin have become sister cities (or twin cities, as the British say) with a total of seventeen interesting metropolises in all parts of the world. Los Angeles was the first one.

Berlin, August 29th, 2022 (The Berlin Spectator) — Berlin has countless squares. One of them, Los Angeles Square in the area of former West Berlin, is there for a reason. The distance from this spot in front of the Steigenberger Hotel to Berlin Forest in Los Angeles is 9,300 kilometers (5,779 miles). But Berlin Forest does not appear on Googler Maps. Did they get rid of it? It is supposed to be located in Griffith Park, somewhere between Hollywood, Glendale and Magnolia Park.

This was the first city partnership of this kind West Berlin entered in 1967, only 22 years after fascist Nazi Germany was defeated by the Allies, including the Americans. The universities in the two cities cooperate closely. And the municipalities run mutual projects. Also they exchange knowhow in several fields, including architecture, administration, judicature and police work.

It took exactly 20 years and five days until there was a second partnership: West Berlin and Paris became sister cities on July 2nd, 1987, when the West German enclave, which was still surrounded by the Wall, celebrated Berlin’s 750th birthday. It got a good present from the French: They actually agreed to move one stage of their Tour de France to West Berlin. Back then, Governing Mayor Eberhard Diepgen and Jacques Chirac, his colleague from Paris, were among the many spectators. It was an unforgettable summer event.

Are there more sister cities? You bet. In 1988, Madrid became one of them. The cooperation in several areas was close until the Corona pandemic messed it up. According to Berlin’s State Chancellery, an open air exhibition organized by Madrid’s Museo del Prado will be set up at Neptune Fountain, close to Alexanderplatz and the TV tower, these days. It is supposed to last for a month and a half.

Eight days after the fall of the Berlin Wall, on November 17th, 1989, Istanbul became Berlin’s twin or sister city. The cooperation in the areas of culture and education is close. Warsaw, the capital of neighboring Poland, followed in 1991, a few days before Berlin and Moscow became ‘Partnerstädte’, as the Germans say, too. Of course, the Russian war of agression against Ukraine is ruining the cooperation. And no, Moscow was not part of the recent Mayors for Peace initiative, in which Ukrainian flags were hoisted all over the place, including in front of Berlin’s Red City Hall.

Brussels, Budapest., Jakarta and Tashkent became Berlin’s sister cities during the first half of the 1990s. The same applied to Mexico City. The Mexican community in Berlin is rather big, considering their home country is so far away. In a few days from now, Mexicans in Berlin, their friends and families will be celebrating ‘El Grito’. The cooperation touches many areas here as well. Tourism and energy are two of the more important ones.

Guess what other city is connected to Berlin: Beijing. The partnership and interesting exchanges started in 1994. Obviously, the trade realtions are good. The Berliners run a ‘Berlin Business Desk China’ over there. It helps German companies in China, and it is the first point of contact for Chinese companies that want to be part of the intercontinental business with the Germans.

Tokyo is yet another sister city Berlin has had since 1994. Twenty years later, in 2014, a cooperation agreemenmt was signed as well. City development, ernvironmental issues and culture are some of the areas of cooperation with the Japanese friends.

How about Buenos Aires? In this case, culture is the most important aspect. Berlin’s Long Night of Museums was adopted in the Argentinian capital. Prague, Windhoek and London are Berlin’s sister cities no. 15, 16 and 17. In the case of London, youth work, sports, inner security, environment protection and traffic are important aspects of the cooperation with Berlin. This partnership was also supposed to cushion the ramifications of Brexit.

In 22 years, there have not been new sister cities. There are those who say Kiev (Kyiv) was a good candidate right now. Berlin accommodates many Ukrainian refugees and Germany is one of Ukraine’s big supporters. Of course, a partnership would be another sign of solidarity.