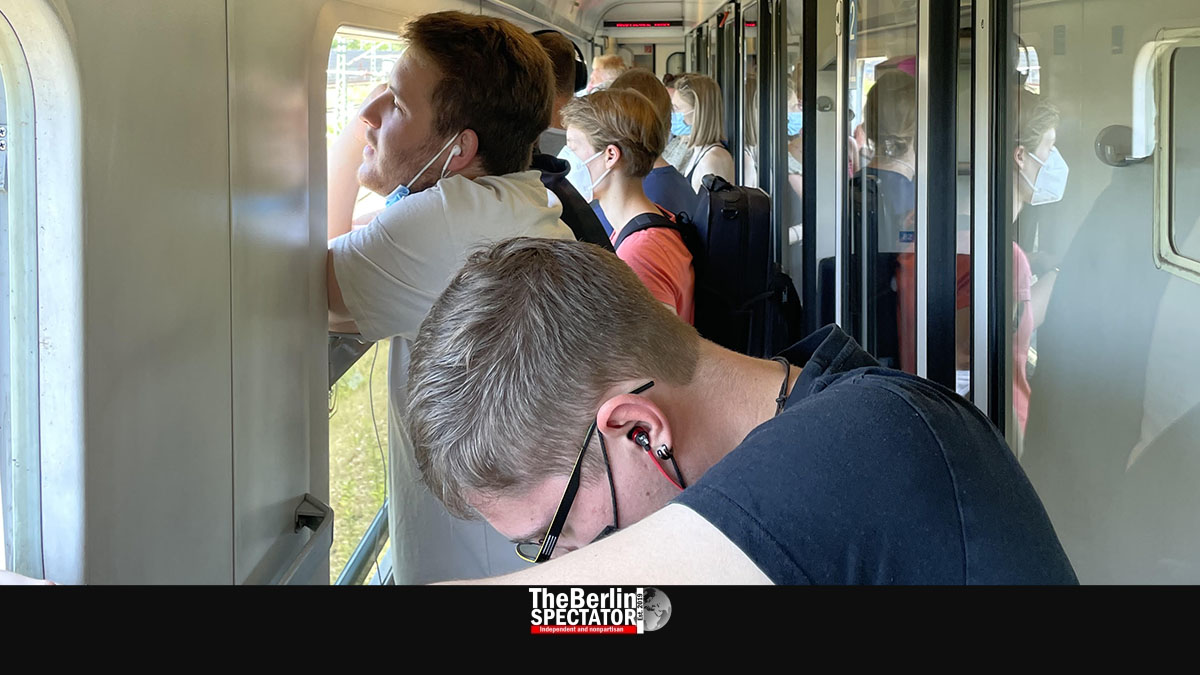 Getting from A to B for just 9 Euro created a summer of cross country travelling for many, as packed regional trains chugged through Germany. Luckily, it was for the whole summer, as some passengers may have taken longer trips than usual just to get there for so cheap, as Tom Grant explains.

Berlin, August 30th, 2022. Update: August 31st, 2022, 5:45 a.m. CEDT (The Berlin Spectator) — Deutsche Bahn’s 9 Euro Ticket has been hailed a success by people across Germany, Europe, and the world round for its obvious affordability on a multitude of transport services across the country. That multitude however, did not include high speed trains. The ICE (Inter City Express) high speed service can get you across the country in a matter of hours, with a train from the western city of Cologne to the eastern city of Dresden taking 6 hours and 44 minutes, and from the northern city of Hamburg to the southern city of Munich taking between six and six and a half hours.

Regional trains, however, can take a lot longer. There is no denying Germany is very well connected by train stations. I used my 9 Euro Ticket to get from Munich to Leipzig, and then from Leipzig to Dresden. Previously, I had visited visited some cities with an Interrail pass which allowed me to use ICE trains, so have endured both ends of the German rail experience.

A trip on the ICE train from Munich Hauptbahnhof to Leipzig Hauptbahnhof will take you
around 3 hours. The route I took, which was using regional trains only, took me around six and a half hours. This was using two separate trains, with a connection in Hof.

The train was late to begin with, not by much, but enough that people on the platform were asking staff where the train was. I come from Britain, so I was glad the train actually turned up. It was a common European commuter train, with six seats to a cabin within the carriage. What was yet to be known, was how everyone was going to fit.

As people filled the train, it was clear that it was going to be tight. The queues came to a halt in the corridor of the train, and everyone without a seat assumed standing positions. I gave an overexaggerated smile through my face mask to the woman who stood next to me, as if we both knew what we were about to experience. It was the hottest day of the year, and even with the windows open, COVID-19 regulations were still in force. Suitcases became seats and those in chairs were looked upon with envy. The corridor was so packed the ticket attendants would have been quicker spider-man styling it on the outside of the carriage to get through.

It was then I realised these trains have folded seats in the corridor, and gestured to the woman to see if she wanted to sit. She did, and we continued to make awkward eye contact for the rest of the journey as if to show our mutual feelings towards the train ride. At one point, a plastic bag filled with assorted pastries came out of her suitcase and I eagerly tried not to make eye contact. I’m British, remember? So, I would basically melt if she offered me one as I would be inclined to say ‘nein’.

The train slowly emptied after each stop, and seats became available for those quick enough to grab one. My new aforementioned bestie on the train asked me a question as she took a seat, something I could not understand through my shaky German skills and the FFP2-marked mask she had over her face. It came to conclusion that she wanted help getting her case on the rack, and me being the Hercules I am, showed the carriage how to unsuccessfully lift it. I’m just glad that the lady disembarking at Marktredwitz was okay, albeit a little shocked after I nearly dropped a suitcase on her head. I eventually got a seat a couple of stations before Hof, where it was clear I was going to miss my connection due to earlier delays.

Despite missing my connection, a slow walk through Hof with an ice cream was not a bad option whilst waiting for the next train to Leipzig. Luckily, my next train was nowhere near as busy, so I managed to grab a seat and have a charming conversation with a couple about what I’d do in a zombie apocalypse. I accidentally won the game by saying I’d go out to sea. Ooops.

My train may have been busy, and it may have taken a while to get there, but, I got there. And I got there for 9 Euro. Looking at the Deutsche Bahn website, a direct train on the ICE would have cost me 133.90 Euro. Mine was 124.90 Euro cheaper, and only took just over double the time. I don’t think it was too bad having to stand, looking upon Germany’s beautiful countryside for a while.

Fingers crossed something will come soon. But for now, we have the 9 Euro summer of 2022 to reminisce about.

Find all of our features and articles on the 9 Euro Ticket by clicking here.

I’m Tom Grant, a German and Arabic undergraduate at The University of Manchester, and a freelance journalist currently in Berlin. I’m from the northeast of England and have written in the United Kingdom and the Middle East. I write about my experiences of life in Germany as a Brit, and what I encounter along the way.