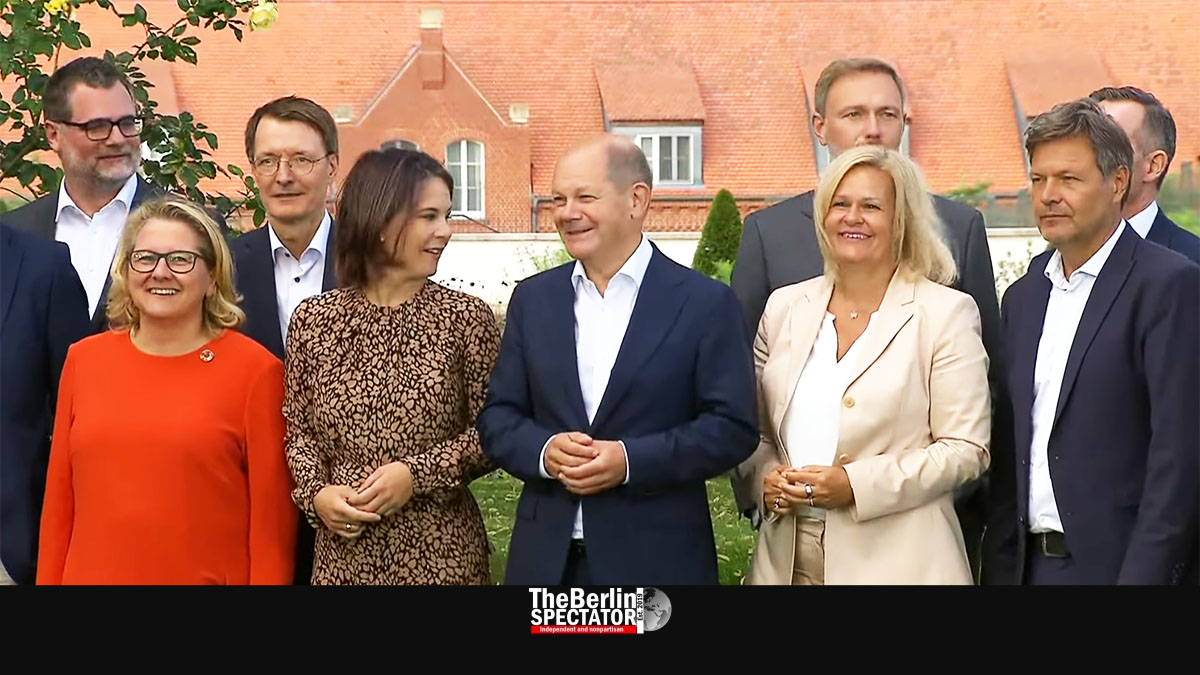 At Meseberg Palace, the government’s official guest house in Brandenburg province, Chancellor Olaf Scholz and his Ministers have a lot to talk about before they return to Berlin today. Relief for those who cannot afford to pay their energy bills anymore is on the agenda.

Berlin, August 31st, 2022 (The Berlin Spectator) — Finding a good retreat in Brandenburg is easy. Meseberg Palace, a rather posh location, is Germany’s guest house. It is vacant most of the time. In this elegant atmosphere, important questions have been discussed since yesterday. Improving the natural gas levy Germans will have to cover is one of them, relief for people in need another.

One of the main purposes of the government’s convention is to demonstrate unity. This may sound easy, but isn’t. While two of the three parties in Scholz’ government coalition, his own center-left Social Democrats (SPD) and the center-left Greens, want to replace the 9 Euro Ticket which expires tomorrow, after three months, the center-right Free Democrats (FDP) are not so sure. The Ticket was supposed to reimburse people for the skyrocketing energy prices, just like the gasoline rebate. Both measures applied in June, July and August and cost billions of Euro.

What about a 49 Euro Ticket? This is what the SPD wants to introduce in cooperation witrh the federal states, but not all of them seem to be keen on supporting the plan. The idea the Greens came up with sounds a little more complicated: They want a regional 29 Euro Ticket and a 49 Euro Ticket for nationwide use. Finance Minister Christian Lindner’s FDP is far less enthusiastic, but might support a 69 Euro Ticket.

A concept paper the SPD put together also includes direct financial help for Germans with average or low incomes, pensioners, families, students, apprentices and social welfare recipients, on top of the energy money that is supposed to be paid out. Here, the Greens have similar ideas while the Free Democrats want to help pensioners and students only, according to the ‘Spiegel’ weekly.

Minister Lindner wants to compensate people for the cold progression effect, meaning he wants to keep people who got a raise because of the inflation from losing money anyway, because they hit a higher tax bracket as a result. He is ready to invest billions. In this regard, the SPD and the Greens have doubts. They say people with a high income would benefit far more than those with low salaries.

A price cap for electricity and natural gas is yet another subject that was supposed to be discussed at that nice palace in Brandenburg. This measure is supposed to apply to basic requirements, an amount of energy that still needs to be defined. Besides, the FDP has to jump on the bandwagon to make it happen. Help for tenants is another aspect certain parts of the coalition are in favor of.