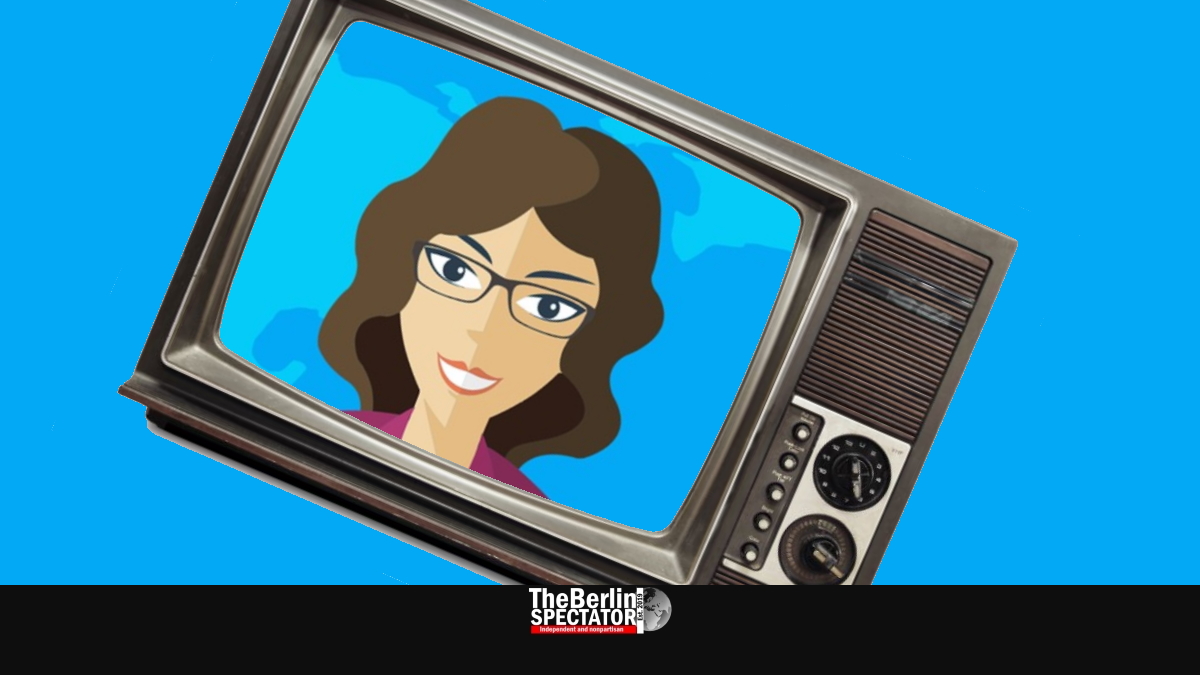 News shows on German TV are almost as popular as fresh bread rolls. And, believe us, the Germans are true masters at bringing the message across. Their news broadcasts can be a little odd anyway.

Berlin, February 11th, 2020. Update: August 31st, 2022 (The Berlin Spectator) — In order to produce a full-blown, sophisticated news show on German television, you need content first. Most German TV channels are actually good at picking subjects, assessing them, getting the right statements and piecing the whole thing together like a sandwich. Seriously, independent journalism is mostly not an issue.

But the news shows themselves and their presentation can be rather weird. This is what the sequence of a regular, moderated German TV news show looks like:

An annoying jingle starts the show, while a partially virtual studio with a long wooden table appears. Two individuals stand behind it. The day’s headlines are being displayed at the bottom of the screen. It looks like those in charge may have learned things during internships at CNN in Atlanta some decades ago.

An off-camera voice announces the name of the female anchor who seems a little tight and arrogant, but she is probably the nicest person on Earth in real life.

The news show host announces the name of the colleague next to her, who is responsible for “the news overview and sports on our show”. Oh, so it’s not any other show, but this one? Now that this question has been answered, the next one should pop up immediately: Why is there an extra colleague for “news and sports” on this news show?

Or, to rephrase the question: If that colleague is responsible for news, what will the show host be doing? Well, she will be moderating the important news, while the individual next to her is lucky enough to read the less important ones. Still better than carrying dead cows through a slaughterhouse.

After a round of interesting news, the news show host announces more news. At that point, most viewers might have guessed that they will not beat any piñatas with broomsticks on this show, but rather do exactly what news shows are supposed to do, namely deliver more news.

The anchor also explains the first news item the colleague next to her will be presenting a few milliseconds later, as if that lady had forgotten what she was supposed to talk about, or as if she was incapable of presenting that news item herself.

The lady for less important news and sports (Isn’t that exactly the same?) announces the news item the news show host said she would announce. And the viewer is starting to ask himself, or herself, what this kind of circus is all about.

The ‘unimportant news’ lady presents the first two sentences of her news in a more narrational form. Then the transition to the ‘read news’ form takes place in an unobtrusive way. No, dear German TV news makers, we never notice that transition. It is usually as smooth as a Cadillac’s automatic gear box.

The ‘more important’ news presenter takes over again, by explaining that the weather man will present the weather. He, the perfect son-in-law, does.

At the end of the broadcast, the main show host wishes her viewers a good night and spreads some BS about the next show on the channel, while the less important news presenter smiles. If we only knew what her thoughts were at this moment. One thing is clear: She must have come to the show straight from the dentist.

While the closing credits are racing across the screen, the two ladies in the studio are talking to each other, but their microphones are already switched off. So the viewer either needs to be a lip reader, or has no choice but to guess what they are telling each other.

It could be this:

“Whew. Finally. I think I will have a double Jack Daniels on the rocks and a huge cheeseburger with an onion overdose.”

“That stuff gives me gas.”

We will never know.