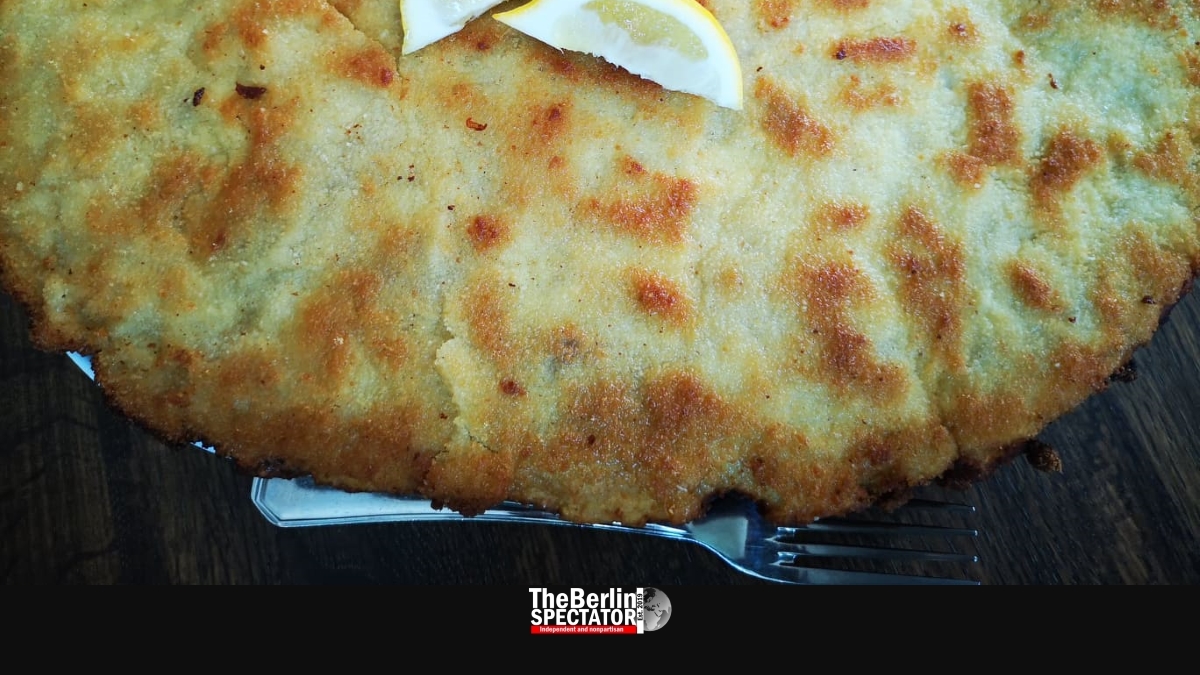 There are two ways time travel can be achieved. Either board a stable spaceship and fly into a wormhole or visit ‘Louis’ in Berlin. The difference is that they do not serve giant Schnitzels in wormholes. Or do they?

Berlin, November 22nd, 2019. Update: September 7th, 2022 (The Berlin Spectator) — Entering ‘Louis’ is like going back to 1980. Visitors who make it to Richardplatz 5 in Berlin’s Rixdorf neighborhood in the Neukölln district will still be in 2022 while standing on the sidewalk. But once their first foot touches the restaurant’s linoleum floor, they are catapulted 40 years back in time.

Schnitzels the Size of Vermont

The red and pink floor does not go well with the walls in Kermit green. Imagine the most kitschy place you have seen in your life and multiply it with a ton of bad taste. This is how you get there. But here, at ‘Louis’, it does not matter at all.

This place is all about Austrian food, and mostly about thick pork Schnitzels the size of Vermont. Whoever orders the Klassiker will hear how it is being prepared through the open kitchen door. Once the sound of frying and cutting stops, the Schnitzel is about to be delivered to the table.

When that big moment arrives, first-time visitors usually stare at their meal in disbelief. This pork Schnitzel is far larger than anything they have ever eaten before. It is breaded, juicy and it buries a rather large portion of fried potatoes.

This giant meal, which will feed an entire biker gang, is probably not only the most gigantic Schnitzel in the Milky Way, but also the most affordable huge Schnitzel mutation, at a price of around 17 Euro (16.83 U.S. Dollars or 14.65 Pounds Sterling).

O.k., the giant Schnitzel may not be kosher or halal. It is not exactly a politically correct meal, also because ‘Louis’ is not a Gluten-free or vegan place. But it is impressive and delicious. By the way: The restaurant is working on adding vegetarian meals to its menu.

Apart from those gigantic Schnitzels, there is a lot more. ‘Louis’ offers Cordon Bleu and other meat alternatives as well as Kaiserschmarrn. This cake-like, sweet Austrian dish comes with apple sauce, tastes well and looks wonderful.

Another calorie bomb nobody should miss is the Apfelstrudel with vanilla sauce. Too full after the giant Schnitzel? Order the Strudel anyway. You can still start a diet tomorrow. ‘Louis’ is about eating properly. For supermodels who are happy with half a sliced carrot for lunch there are other places.

Hardly any guests manage to finish their Schnitzels. The restaurant offers huge pizza boxes so that people can carry three fourths of their meal home and spend a week killing it.

The Austrian Alois Offner established ‘Louis’ in 1994, a quarter century ago. In 2018, he became a pensioner while his daughter Anita Jemrić took over. Her concept remains the same: She offers the largest Schnitzel in the universe and free time travel.