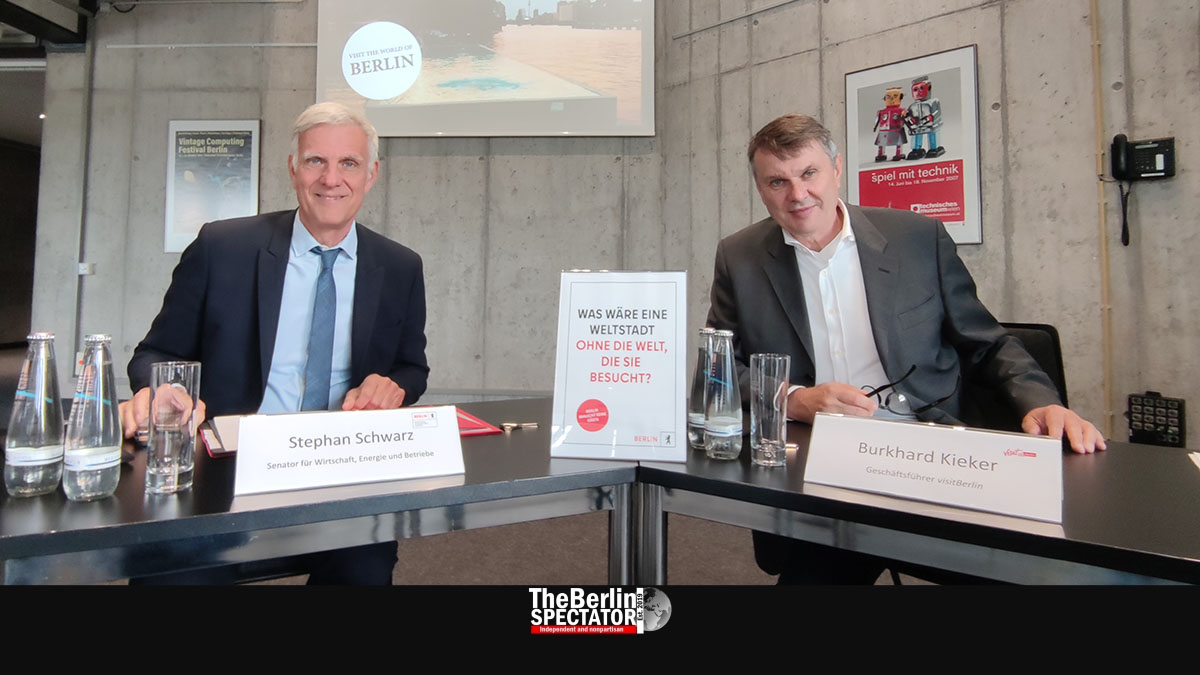 Finally, the tourists are back in Berlin. The new numbers look pretty good. They were just presented by Senator Stephan Schwarz and Tourism Director Burkhard Kieker. Especially Germans and Americans love Berlin.

Berlin, September 9th, 2022 (The Berlin Spectator) — The number of tourists who come to Berlin is on the rise, according to the Senate Department of Commerce. In the first seven months of 2022, as many as 5.5 million visitors were counted, which is only 30 percent below the numbers in the same period of 2019. Compared to 2021, there is a significant increase of 270 percent.

According to Commerce Senator Stephan Schwarz, Berlin has not suffered as a brand. He said many foreign visitors were here, and it was nice to hear so many languages in the city. “We had a great summer and we will hopefully have a great fall.” In the past two years, putting in place anti-Corona measures had been the right decision, the Senator stated. But from now on, the pandemic would likely not hamper Berlin’s tourism anymore. Obviously, there are worries the energy crisis might. But, at least for now, it does not seem to have influenced tourism much.

Burkhard Kieker, the Director of Visit Berlin, the state-owned company that promites Berlin as a tourist destination, said people who came to the capital really wanted to experience the city. One of the most important aspects that made tourists come to Berlin was its culture. Some 70 percent of all visitors who visited the city’s opera or similar venues did not live in Berlin, Kieker said. Culture was one reason tourism in Berlin was returning to the level it had had before Corona. “The years 2020 and 2021 are the ones we would like to forget”, he conceded.

Among all tourists who were welcomed in Berlin from January to July, Germans were the largest group. According to Kieker, a continuation of the growth in this segment should be expected, also because one third of all Germans has not been to Berlin yet. “Visit the world of Berlin” is the slogan of an international advertising campaign Visit Berlin is running in the Americas and elsewhere on the planet.

How about an overkill of numbers? Here we go: In July, a total of 1,124,795 tourists were counted in Berlin. Exactly 708,410 of them were Germans. Compared to 2019, there was a growth of 6 percent. The number of foreign visitors Berlin registered in July was 415,385, which still is 25 percent lower than it was in the last pre-Corona year.

Looking at the countries Berlin’s tourists came from in the first seven months of this year is surprising. The Americans actually overtook the British visitors. As many as 169,001 U.S. citizens flew across the Atlantic Ocean to see Berlin while the number of those who only came across the English Channel was 168,203.

Israelis were the strongest group from Asia, with 42,360 tourists from January to July. When we concentrate on Europe, we will notice that, apart from the British, the Dutch, Spaniards and Danes came to Berlin a lot. In spite of the war of aggression their leadership has been waging in Ukraine since February, 16,843 Russian tourists were counted in the German capital during the first seven months of 2022.

Things are looking good at Berlin’s hotels too. Their occupancy rate was above 80 percent, which is higher than the rates New York City, London and other big metropolises reported. Senator Schwarz stressed how important tourism is for Berlin’s economy. It creates jobs, generates income and fiscal revenue, it improves the business location Berlin, its infrastructure and image.

Berlin definitely needs its tourists, and the tourists want to be in Berlin. That is because they know the city of cities offers a lot, including 180 museums, 300 galleries, three opera houses, two zoos, 150 theaters, more than 36,000 retail businesses, some 15,000 restaurants, cafés and clubs, as well as 1,500 events per day. Oh! We almost forgot the good food. Besides, Berlin is cool, sexy and hip. Who could resist that?