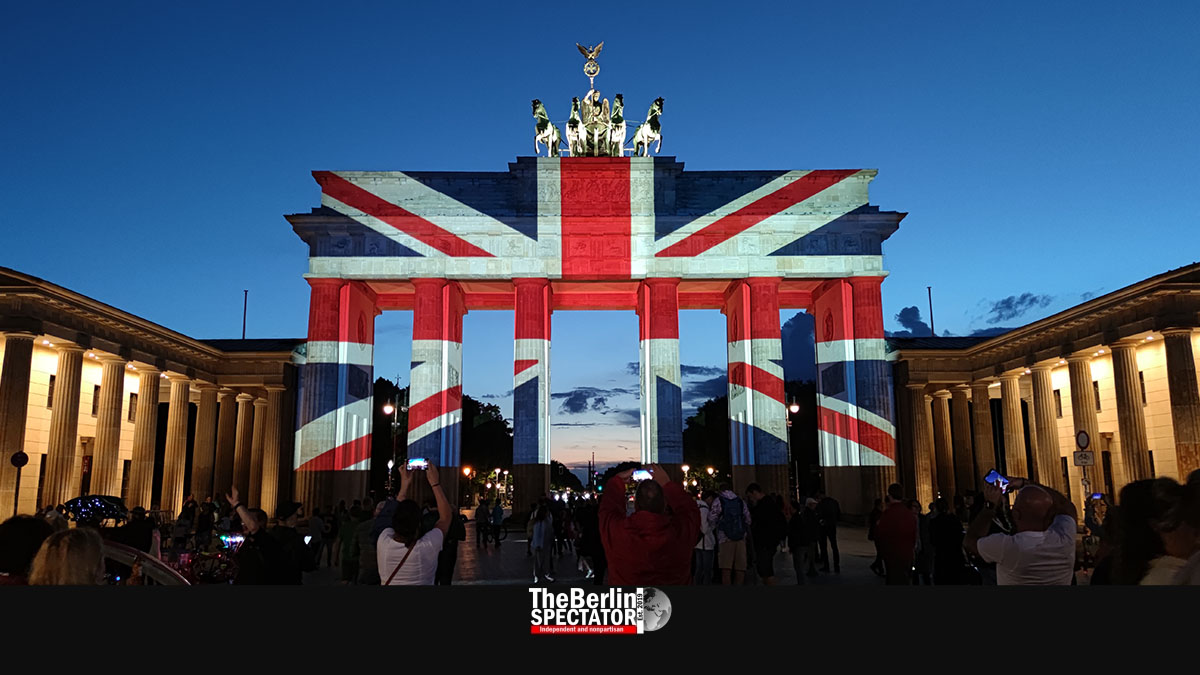 Since the news of the death of Elizabeth II reached Germany, the President, the Chancellor and the Governing Mayor of Berlin have expressed their condolences. In the late Queen’s honor, Brandenburg Gate was illuminated in the colors of Union Jack on Friday evening.

Berlin, September 9th, 2022. Update: 9:02 p.m. CEDT (The Berlin Spectator) — President Frank-Walter Steinmeier said he was saddened to hear about the passing of Queen Elizabeth II. In a message to King Charles and the Royal Family, he stated the Queen had shaped a century, in the United Kingdom and the entire world. She had been respected and held in high esteem everywhere.

End of an Era

“Over here in Germany she was admired and worshipped”, Steinmeier said. “Today, millions of Germans are connected to the people in the U.K. in sadness and sympathy. The Queen’s natural authority, her experience and the exemplary performance of her duty will remain in our memory. Her death is a watershed, the end of an era.”

The Federal President said millions of people in all parts of the world, including in Germany, had followed Queen Elizabeth’s reign in both good and difficult times, as well as her recent anniversary. She had increased the reputation of her country “and controlled its fate cautiously and with selfless discipline.” Also, the Queen had represented the unity of the United Kingdom and embodied continuity in times in which the U.K. had gone through big changes.

As Russia’s war of aggression in Ukraine had shown, peace and freedom in Europe were not self-evident, Steinmeier stated. Elizabeth II had experienced how wars in Europe could be overcome, and contributed to such developments herself. Great Britain had reached out to Germany in reconciliation. “And the hand of reconciliation also was the Queen’s hand”, the President added. Her visit to West Germany in 1965 had been one of the most important symbols for the British-German friendship that had developed after WWII.

Germany was mouring the Queen, Steinmeier said. He and his wife were very thankful for the encounters they had had with her. “We are thankful to her for being on cordial terms with our country.” The President said his heartfelt sympathy and that of the German population was with her family. He wished its members strength, “God’s blessing” and “good luck for the big tasks that are now descending to you, her son”, Steinmeier’s letter to the new King read.

Chancellor Olaf Scholz reacted by saying the Queen had been an example and a motivation to millions, including in Germany. Her committment to the British-German reconciliation was unforgotten. She would be missed. So would her “wonderful humor”.

In Berlin, Governing Mayor Franziska Giffey stated Queen Elizabeth II had known all Chancellors and most Governing Mayors in her long life. “Most of us do not know Great Britain without her impressive personality”, she said. “The Queen accompanied us through our whole lives, and she already was a legend during her life.” She had always been a dutiful and reliable monarch who had kept close ties to Berlin. The city’s residents had been impressed by her great personality.

When Queen Elizabeth came to West Berlin in 1965, only 20 years after the Allies, including Great Britain, defeated fascist Nazi Germany and ended both WWII and the Holocaust, close to a million inhabitants waited on the streets of the city to see her. There were more visits in 1978 and 1987. Shortly after the fall of the Berlin Wall and Germany’s reunification, in 1992, she visited Berlin yet again. And she did so in 2000, to open the new British Embassy at Brandenburg Gate, in 2004 and 2015. With King Charles, who was Prince back then, she also visited Brandenburg, including Potsdam and Stahnsdorf, in 2004.

On Thursday evening, the Bundestag observed a moment of silence for the late Queen Elizabeth II. On Friday morning, hundreds of people went to the Embassy, 22 years after she had inaugurated it, to leave flowers in her memory. A long line of people who wanted to sign a book of condolences for the Queen formed at the entrance. President Steinmeier went there as well.