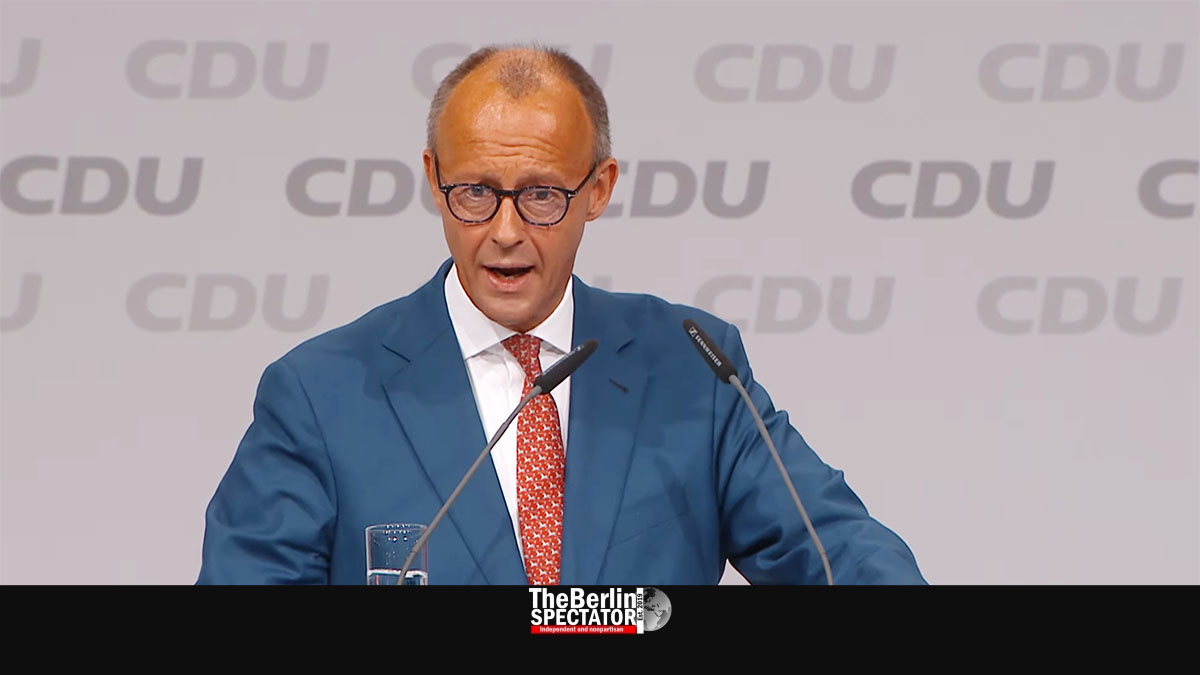 Since the Christian Democratic Union (CDU) picked the wrong candidate for Chancellor and lost the general elections last year, Germany’s conservatives have been in a difficult situation. They need to hit the headlines. That is why party chairman Merz keeps on slamming the government. But what does the CDU actually want?

Berlin, September 10th, 2022 (The Berlin Spectator) — When chairman Friedrich Merz was done with his welcome speech at this weekend’s CDU party convention, the critics quickly came to a verdict. Many of them said, instead of constantly attacking Chancellor Olaf Scholz’ ‘traffic light coalition’, he should have said something about the party’s goals.

For decades, Germany’s main conservative party has had an issue: Even when its female Chancellor Angela Merkel ruled Germany, only about 1 in 4 members were women. In its caucus at the Berlin Bundestag, only 46 MPs are women today. This is an embarrassing rate of 23.4 percent. In Germany’s parliament, only the extremist right-wing AfD looks worse in this context (and in all others). More moderate ‘Union’ members wanted this to change.

Merz himself wanted the CDU to become “more modern and female”. He got his way, at least on the female part of this short wish list. After a long discussion, 559 delegates voted for a “temporary and incremental female quota”, and 409 of them opposed it. Now that this is done, the party may be in the position to concentrate on ending the crisis it got itself into, and on ways to get back into the chancellery in the fall of 2025. This is when the next elections for the Bundestag will take place, unless the ‘traffic light’ implodes beforehand.

In times of crisis the CDU needed to build momentum in order to give the same to the country, Friedrich Merz stated in his big speech. Then, he started taking apart the government. Now that the Federal Republic needed an obvious course, it had “the weakest federal government of all time”. Germany could and needed to do better, he told the delegates. This was why the convention was taking place at the right moment.

In his speech, he also slammed the country’s green Commerce Minister Robert Habeck who refuses to prolong the operating time of Germany’s last two nuclear power plants in the ongoing energy crisis. “Stop this green, yellow and red ship of fools!”, Merz shouted. He was referring to the three parties involved in Scholz’ government coalition, namely the left-wing Greens, the center-right Free Democrats (FDP) and the center-left Social Democrats (SPD).

Merz vowed the CDU would always support Ukraine. In times of war, peace was what people wished for, he accurately stated. And he called for a direct delivery of German-made Gepard tanks to Ukraine. He did admit it had been “dumb and naive” to make Germany dependent on natural gas from Russia. But this had not only been the CDU’s fault, since its former coalition partner SPD had supported this policy too.

Generally, the ‘Union’ would not reinvent itself, Friedrich Merz stressed. The party was based on a strong fundation. According to him, the convention’s motto “More Security for Germany” refers to both the inner security and the security of supply.

Because of the upcoming state elections in Lower Saxony, the CDU’s convention is taking place in Hanover, its capital. Here, the CDU wants to defeat the ruling SPD on October 9th, 2022. The conservatives sent Bernd Althusmann into the race as their main candidate. Right now, he is deputy First Minister and Commerce, Labor and Transport Minister under the Social Democrat Stephan Weil he wants to defeat.

Alhusmann is experienced in losing elections. In 2017, when he was the Union’s main candidate in Lower Saxony already, he brought in the worst result his party has had in Lower Saxony in six decades.