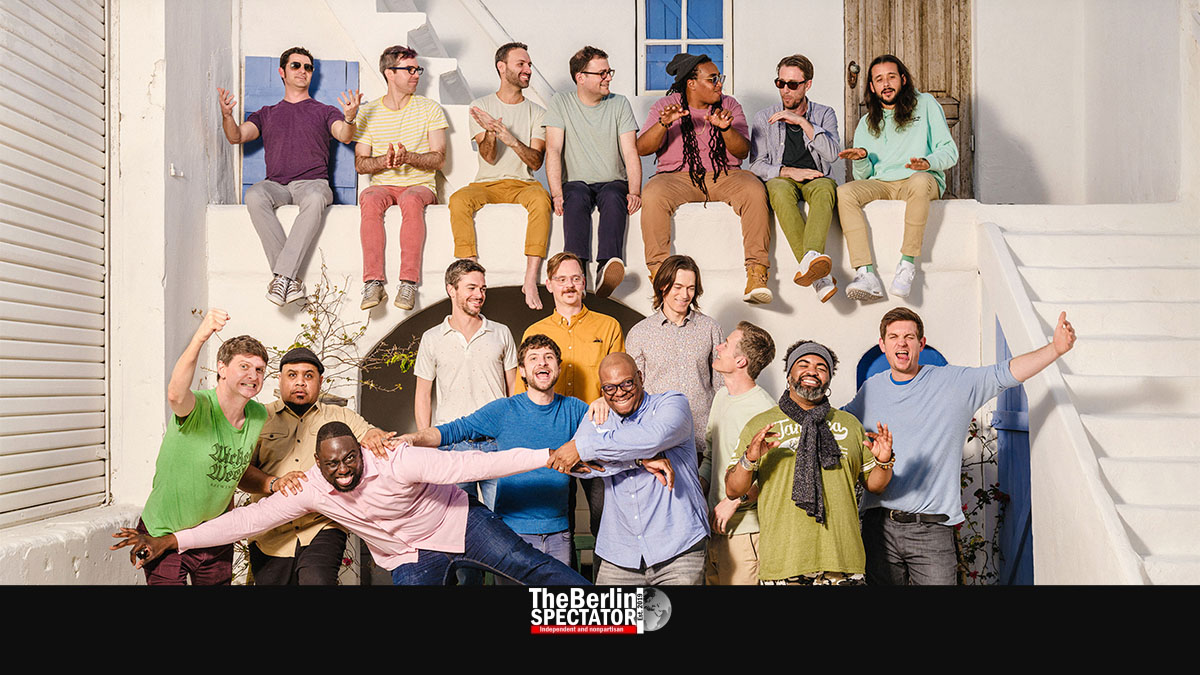 Germany will be welcoming greatness soon. The sensational American Fusion and Jazz-Funk group Snarky Puppy will be hitting 29 stages in Europe, including five in the Federal Republic. Thanks to them, real music is alive.

Berlin, September 12th, 2022 (The Berlin Spectator) — If the late Maurice White, the late George Duke and the late Chick Corea had founded a band in heaven, this is more or less what it would sound like. Add some Herbie Hancock, Roy Ayers, John McLaughlin, Incognito, Banda Black Rio and Irakere influence, stir the whole thing, cook it for a day, and you will still not have reached Snarky Puppy. Yes, they must have inhaled all of this influence, but they are absolutely unique. Saying they are brilliant would be an understatement.

Snarky Puppy are pretty much the exact opposite of what the Americans call Smooth Jazz. The group’s music is diverse, unbeatable, majestic, surprising. In part, it might seem experimental but it always returns to structured, uplifting sounds you can easily create if you are in Michael League’s league. The problem is that hardly anyone on this planet is. League, a bassist who felt a strong urge to play real music when he studied at the University of North Texas in Denton, founded the group in 2004.

Just when the world thought that America’s contemporary Jazz was lost and handed over to the likes of Kenny Gorelick (who by the way did deliver the real thing as a member of the Jeff Lorber Fusion in the 1980s), Snarky Puppy came along to save what was left of it. They enriched it with unbelievable compositions, arrangements and performances. Obviously, real music will always save us at the last moment. For this to happen, genius is needed. Masters like Michael League do not come along every five minutes. That is why it was a long wait. In a way, he is George’s, Maurice’s and Chick’s heir.

More of our Features

So are his mates, including the keyboarders Bill Laurance and Bobby Sparks II as well as their genius colleagues Justin Stanton, Shaun Martin, Bob Lanzetti, Mark Lettieri, Chis McQueen, Mike Maher, Jay Jennings, Chris Bullock, Bob Reynolds, Zach Brock, Nate Werth as well as other members and cooperation partners. The Fusion and Jazz-Funk they deliver is too good to be real. Obviously, they have been drowned in Grammy Awards.

Guess what: Snarky Puppy’s touring schedule is almost as good as their music. They will be performing in Europe 30 times on 29 stages, including five in Germany. Their gigs should not be missed. After a rehearsal gig in Dallas, the band is scheduled to cross this thing known as the Atlantic Ocean. Let’s hope they won’t have to fly in the entire backline.

Annemasse, France, is first on October 1st, 2022. In Dublin, Glasgow (where they will need subtitles when they talk to people) and Bristol, they will raise the roofs of the venues there, before they continue on to Manchester (“Manchester, England, England, across the Atlantic Sea ….”), London, Paris, Brussels, Amsterdam and Nancy. No, she is not a groupie, but a French city. On October 14th, Snarky Puppy are supposed to hit Cologne. Good luck with those tickets. The only way to get in would be to purchase them from someone else because the source is depleted.

Zurich and Munich are on the touring schedule. In Vienna, they will be performing twice in a row. How about Budapest? After concerts in Brno, Prague and Warsaw, none other than Michael League and the guys are scheduled to return to Germany. Hanover sounds good. So does Hamburg. But Berlin, where they will be on October 30, 2022, sounds even better. Alright!

Copenhagen, Aalborg or Oslo, anyone? Stockholm, Istanbul and Athens are next. Basel and Brescia are the last two cities. This is what we call a proper tour! The next one is supposed to take place on their American home turf in March of 2023.

So, are you ready to hear Snarky Puppy’s new tune ‘Bet’, with its stunning brass parts and uplifting chorus? Do you need to experience ‘Lingus’ live? Yes, the 5/4 approach is interesting. This brilliant piece alone is worth a concert visit. See you there.