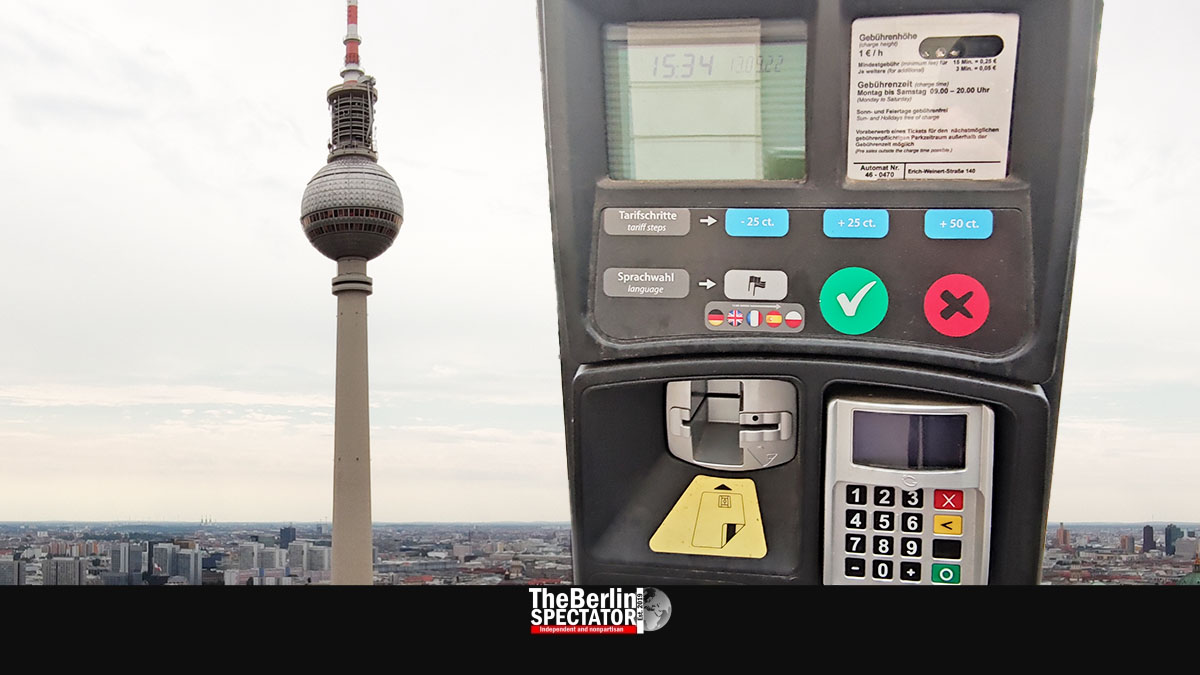 Parking cars in Berlin can be rather costly, depending on the areas we go to. Now, the Senate decided to make it even more expensive. The new fees apply from January 1st, 2023.

Berlin, September 13th, 2022 (The Berlin Spectator) — Munich, Bavaria’s wonderful capital, doubled its parking fees earlier this year. Parking a car on the street in the city’s posh Schwabing borough or in other parts now costs 10 Euro Cents per three minutes or 2 Euro per hour. Munich’s City Council wanted to kill two birds with one stone. Less motorists were supposed to look for parking lots in the affected areas. At the same time, the city intended to increase its income to 15 million Euro (15.13 million U.S. Dollars or 13 million Pounds Sterling) per year. The plan seems to be working well.

Six hundred kilometers (373 miles) further north, Berlin is taking the same step. So far, parking on the side of the street costs 1, 2 or 3 Euro per hour, depending on the area. Soon, the fees will be 2, 3 and 4 Euro instead. This means that the fees in Berlin’s cheaper paid parking areas will double from 1 to 2 Euro. In general, parking on a regular basis will not really be affordable anymore.

Governing Mayor Franziska Giffey’s Senate agreed to Mobility Senator Bettina Jarasch’s draft plan. It will now be turned over to the Council of Mayors, which is supposed to comment. Its members will most likely agree. Berlin’s parking fees have not been increased in more than 15 years. To the Senate, it was about time. Many residents, on the other hand, will not exactly be happy.

According to the Senate, the parking fee increase will support the mobility transition it is working on. It is supposed to improve the safety on the streets of the city, the air quality and get the noise down. The hope is that Berliners will walk or use their bicycles more, or travel by public transport. Motor bikes, bicycles, e-bikes, transport bikes, and electric scooters are exempt. Recently, the Senate put in place new rules for companies that rent out vehicles of this kind. Car sharing companies are required to take part in Berlin’s ‘Handy Parking’ system if they want to save high parking fees. For unknown reasons, Germans use the word ‘Handy’ with a capital ‘H’ for ‘cell phone’. Half the usual fees will be charged for electric rental cars.

In all the bad news for motorists, there is one hidden item of good news: It will take some time to change the settings on all 4,500 parking ticket vending machines in Berlin. After January 1st, 2023, the new fees will apply once this is the case, meaning machines that have not been reset will sell parking tickets for the old price, and they will be valid anyway. The operators of those vending machines have until June 30th, 2023, to get the resetting done.

Residents can get parking I.D. for their neighborhoods. Here, the fees are supposed to be increased as well, but the Senate intends to deal with this aspect later.

In the meantime, parking in more and more of Berlin’s neighborhoods costs money. In regard to the extension of paid parking zones, there does not seem to be a comprehensive system. In some rather posh areas in Berlin’s Charlottenburg borough, parking is still free, while it is not in less expensive areas, including some that are located outside the German capital’s ‘S-Bahn’ train ring.