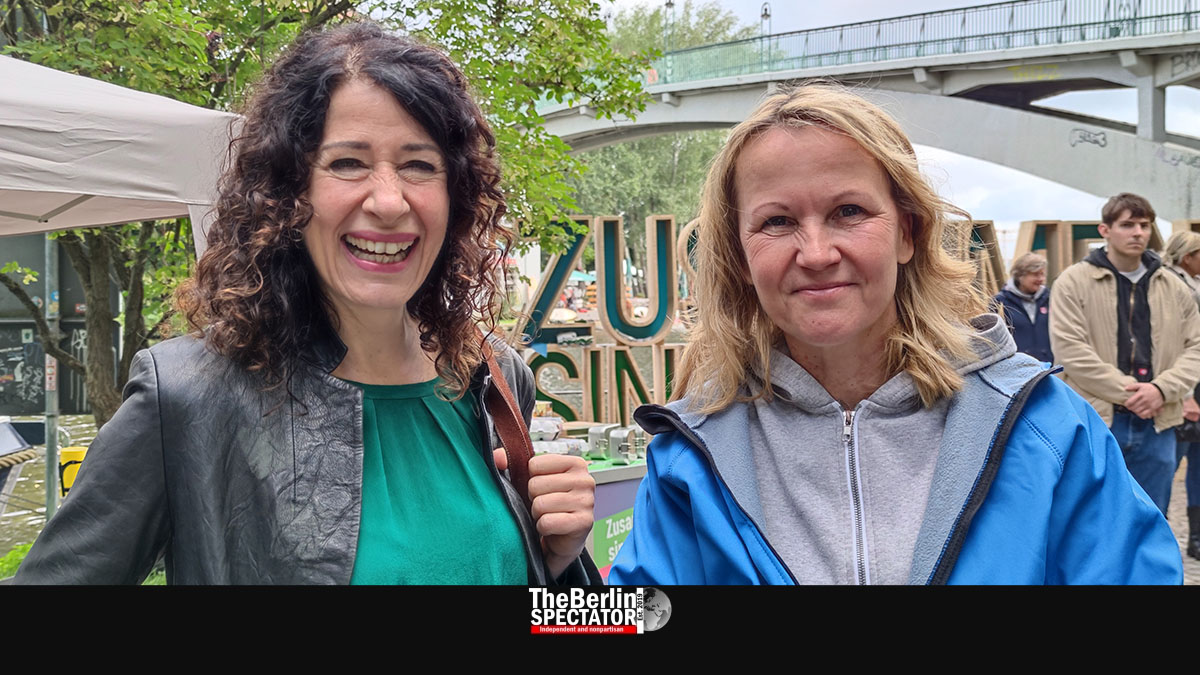 Germany’s Environment Minister Steffi Lemke and Berlin’s Environment Senator Bettina Jarasch showed up at Treptower Park in Berlin on Saturday. Their mission was to clean up, with dozens of fellow Berliners.

Berlin, September 17th, 2022 (The Berlin Spectator) — Both Minister Streffi Lemke and Senator Bettina Jarasch are members of the Greens. While Mrs. Lemke heads Germany’s Ministry of the Environment in Berlin, the capital, her colleague has the same area of responsibility in Berlin, the city state. But since it is the same city, none of them had to travel far in order to get to Treptower Park, a truly nice spot located right next to the Spree river.

Along with other Berliners they took part in World Cleanup Day. The mission they accepted was to clean up the park. Who wants to see cigarette butts, siringes, chocolate bar wrappings, beer bottles and other trash in parks? Absolutely nobody. That is why everyone got busy picking up the waste left behind by ignorants.

But first, Bettina Jarasch and Steffi Lemke held short speeches at the meeting point at Abteibrücke, a little bridge to the tiny Island of Youth. In most cities in the world, people come to parks to leave all the noise behind and listen to the birds sing. Not in Berlin. A DJ with Bosé loudspeakers played his beats even while the two Green ladies were talking.

Senator Jarasch said, Berlin’s public utility company BSR could not keep the city clean on its own. Society needed to play a role as well. She also stressed the social action aspect included in today’s World Cleanup Day. The recent crises had led to a lot of isolation. It was important to her, and generally a lot of fun, to do things together and make the world a better place even in tiny steps.

For many years, she had been part of World Cleanup Day, Steffi Lemke stated at the park. The reasons behind this activity were serious. The Environment Minister said there were three ecological crises right now. She mentioned the climate crisis, the extinction of species and contamination. The latter was threatening people’s basis of life just like the other two crises. This was why she was glad many people had been taking part in World Cleanup Day for a long time.

Minister Lemke criticized Germany’s “throwaway society” and said not enough recycling was taking place. A lot of material was wasted. The vortex of plastic waste in the world’s oceans was a big problem. “I believe many of us simply do not know we have spread plastic waste all over the planet”, Mrs. Lemke said. Plastic residues were being found in the deep sea, the Arctic and Antarctica. This was why the symbolic contribution of taking part in World Cleanup Day was important.