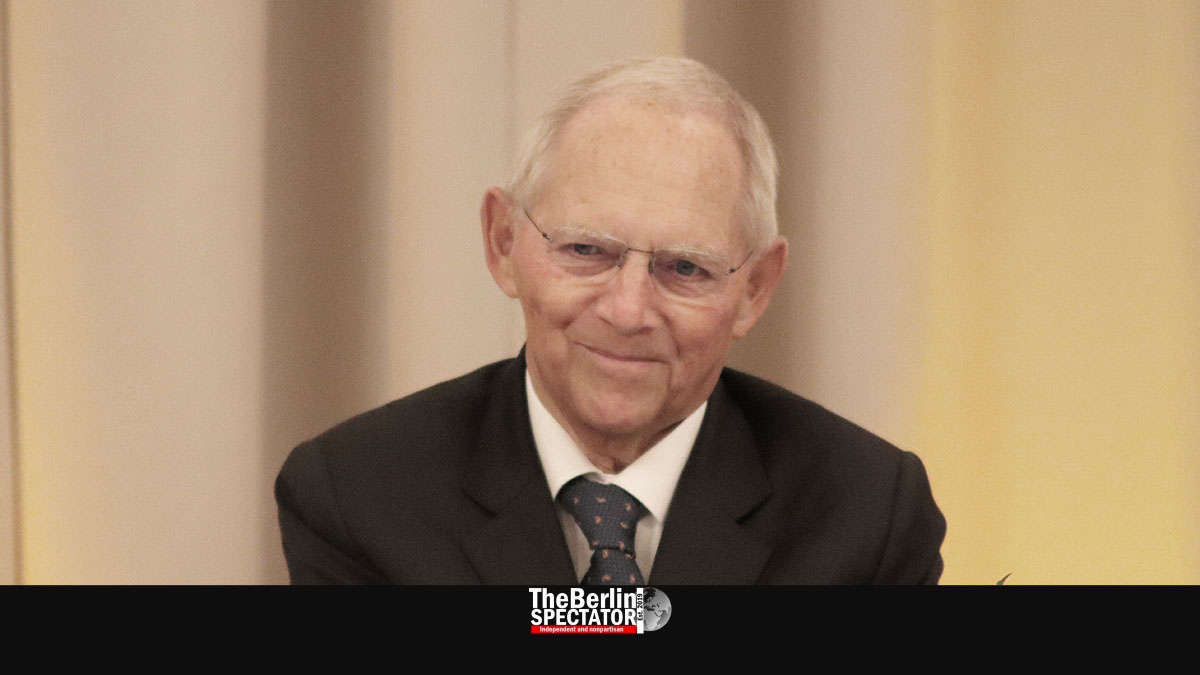 If you are Germany’s longest-serving MP, if they made you federal minister four times, if you were chairman of your party and President of the Bundestag, you must have done something right, but not necessarily everything. This description fits one person in Germany: Wolfgang Schäuble.

Berlin, September 18th, 2022 (The Berlin Spectator) — When Wolfgang Schäuble was born in Freiburg on September 18th, 1942, the Allies were discussing the right strategy to defeat Nazi Germany. By the time he became an adult in 1960, West Germany’s economic miracle was starting to show. Prosperity was returning. People had jobs. Many could even afford TV sets and cars.

A year later, in 1961, he became a member of the Junge Union (JU), the youth organization of the Federal Republic’s conservative Christian-Democratic Union. It took four years until he was part of the CDU itself as well. Little did he know that he would become one of its most influential representatives. In Freiburg and Hamburg, he studied law while heading the JU.

Wolfgang Schäuble was a tax officer when he became a member of the Bonn Bundestag in 1972. The only thing that has changed in this regard is the location of the parliament he has been part of since. After the reunification, it obviously moved to Berlin. In the past 170 years, nobody in Germany has been part of any of its parliaments longer than him.

Until today, Wolfgang Schäube has not managed to control his strong accent from the Baden region. As President of the Bundestag, from 2017 to 2021, he had to make official announcements all the time. They often sounded ridiculous, and some were hard to understand because of his inability to adapt to standard German. This aspect might be entertaining, but is not really important.

When the Free Democrats (FDP) changed horses in midstream in 1982, by leaving their coalition with the Social Democratic Chancellor Helmut Schmidt in order to form a new government with the conservative Christian Democrats, Wolfgang Schäuble’s time had almost come. But it took Chancellor Helmut Kohl a while to notice Schäuble was the most loyal and gifted colleague he could hope for.

In 1984, he became Federal Minister for Special Affairs and head of the Chancellery in Bonn. Five years later, in 1989, a fateful year for Germany, Kohl made him Minister of the Interior. As such, he was one of the chief negotiators during the talks that led to the agreement about the GDR’s accession to the Federal Republic. Once it was all done, and the reunification had become reality, he left the government to head the CDU’s caucus at the Bundestag, which it shares with its Bavarian version known as CSU.

Truly difficult times came up for Wolfgang Schäuble. On October 12th, 1990, nine days after Germany’s reunification he had contributed to a lot, he was attacked by a psychologically challenged man. It happened during a party event at a pub in the town of Oppenau. Two caliber 38 bullets fired from a Smith & Wesson hit Schäuble. Since this terrible day, he has been paralyzed from vertebra of the chest down. He moves around in a wheelchair.

There was more trouble ahead. It took Wolfgang Schäuble a while to admit to his role in the CDU’s party donations scandal. As it turned out, a weapons dealer by the name of Karlheinz Schreiber gave Schäuble 100,000 Deutschmarks in cash in 1994, which he handed over to his party. In early 2000, he stepped down as party chairman and floor leader at the Bundestag. Later, he apologized publicly, for the fact that laws were broken because that big contribution for the party was not handled properly. This was when Angela Merkel’s era began.

When she became Chancellor in 2005, she made him Interior Minister again. This step was criticized because of Schäuble’s role in the donations scandal, but she insisted. Even though Merkel and Schäuble never became the best of friends, she valued his opinions and input. In 2009, she made him Finance Minister. The scandal Helmut Kohl was involved in as well was forgotten. In 2017, Schäuble became President of the Bundestag.

Today, he is not only Germany’s longest-serving MP but also its President by Seniority. Last year, in 2021, he produced headlines one more time when he used his influence to make sure Armin Laschet, the CDU’s controversial chairman at the time, would become candidate for Chancellor, instead of Markus Söder of the Bavarian CSU. Had he not done so, Söder could be head of government today, at least in theory. The German conservatives probably would not have been pushed back into the opposition.