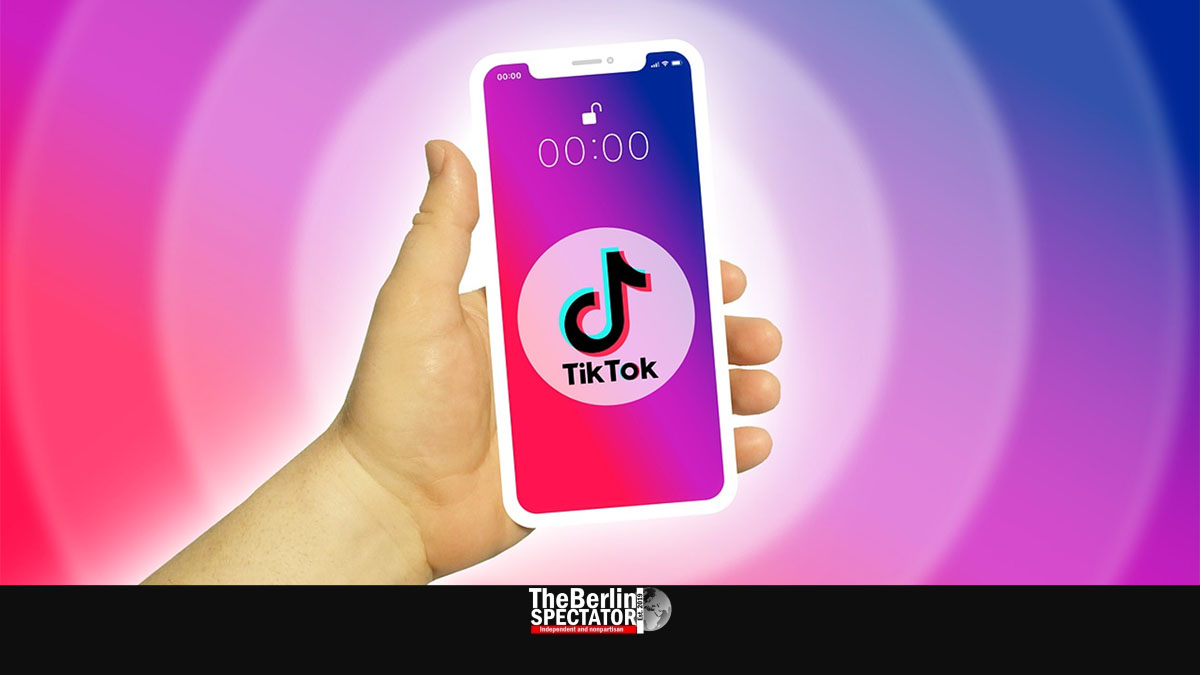 Millions of Germans, especially younger ones, watch countless video clips on TikTok on a daily basis. While some of the content is entertaining or educational, extremists of different kinds use the platform as well. Nobody seems to be stopping or fighting German-language hate speech on TikTok.

Berlin, September 19th, 2022 (The Berlin Spectator) — Sebastian Wippel has answers to everything, including the latest police scandal in Berlin, in which a police officer allegedly offended a Syrian couple. The case will be discussed by the Berlin House of Representatives’ Interior Committee today. But Wippel, a police officer and a politician for the extremist right-wing party AfD in Saxony, already has a verdict. And he just spread it on TikTok. “They are turning this into a racism scandal at the police”, he says into the camera. “Starting a witch hunt against the police” was not justified. The Syrian man needed to go “back to Syria once the war is over”, he added. Since when do politicians from Saxony decide if or when a war refugee in Berlin needs to go back to the country he fled from?

This is unfiltered racism. Apparently, Sebastian Wippel can spread his hatred because nobody is stopping him. It is not surprising that an AfD member obviously hates foreigners, but it is dangerous to let right-wing radicals use TikTok for this purpose without objecting. Kids use TikTok a lot. The more hate speech they hear, the more likely it is some of them might adopt problematic views. Alice Weidel, the AfD’s co-chairlady and co-leader of the party’s caucus at the Bundestag, is all over TikTok as well, with her anti-European propaganda. In this case, others upload her speeches for her. Democratic parties such as the SPD, the CDU, the FDP or the Greens do not seem to be on the platform that much, or not at all, meaning there is hardly anyone who could act as a counterbalance. There is a need for action on TikTok.

Scrolling through a lot of German-language content on TikTok is quite a job. Depending on aspects the app learns about the user, its algorithm might give him or her entertaining clips too, such as standup comedy or snippets of great and funny TV series like ‘Ladykracher’ by the great Anke Engelke. A lot of sex talk can be heard on TikTok too. And cars appear all the time. The coolest guys on Earth, or individuals who think they are, show off their AMGs and M5s. Nice cooking clips make viewers hungry. Math problems? Singing medics? Footage from the Oktoberfest in Munich? Be my guest.

But, the next moment, extremism hits again. It may be hard to believe, but the Corona deniers and other conspiracy theorists, including those who blame “the West” for Russia’s war of aggression against Ukraine, actually look pale and almost harmless compared to Ahmad Abul Baraa who uploads a lot of statements to TikTok. The German citizen of Palestinian Arab origin is gifted. He smiles into the camera as if he was announcing a birthday party or cracking jokes. But his message is the exact opposite of funny. Baraa is spreading Salafist content which is so radical even the Federal Office for the Protection of the Constitution is monitoring him.

In German, the Berlin-based preacher tells Muslim TikTok users Allah’s anger would hit them if they did not follow “the rules”. Of course, he means his own rules. He discriminates girls and women by telling them not to go on class trips with their mates, or by ordering them to be quiet and look down when they are with their husband’s family. When he elaborates on the question whether masturbation interrupts the fasting, he seems to know what he is talking about. According to Baraa, no Muslims should go to the Oktoberfest or similar events “because there is music and there are unveiled women”. He has reportedly called the U.S. “the real terrorists”. The Office for the Protection of the Constitution believes he rejects the Western way of life, which is obvious, and the democractic system. On his channel, Baraa has colleagues who are not as gifted as he is, as presenters, but who do upload similar statements with extremist content. Nobody seems to be protecting Baraa’s target audience, young, German-speaking Muslims, from him. At least not on TikTok.

Radical positions on the platform, in German, are being shared by Sahra Wagenknecht of the far-left party ‘Die Linke’ as well. She keeps on defending Vladimir Putin and says Germany and Europe should retract their sanctions against Russia. She might be in the process of splitting her party which already shrunk a lot in the last elections. There seem to be quite a few Putin fans who support her. The problem is that her pro-Russian propaganda is unopposed on the platform and might influence kids. Radicals like her, like Wippel or Baraa, are on Youtube and other social media too. But there is a difference: On TikTok, their dangerous content is not only visible to their subscribers or users who actively search for them, but to everyone.

Those who would rather watch a TikTok channel that does not make them angry or pose any danger to anyone can go for ‘Affe auf Bike’. It is about this lady who rides her Harley Davidson to the most solitary places, including volcanoes in Iceland. In her clips, she usually shows how cold it is over there and how her little tent drowns in the mud. Then, she explains how often she washes her socks. Nobody needs to protect TikTok users from her.