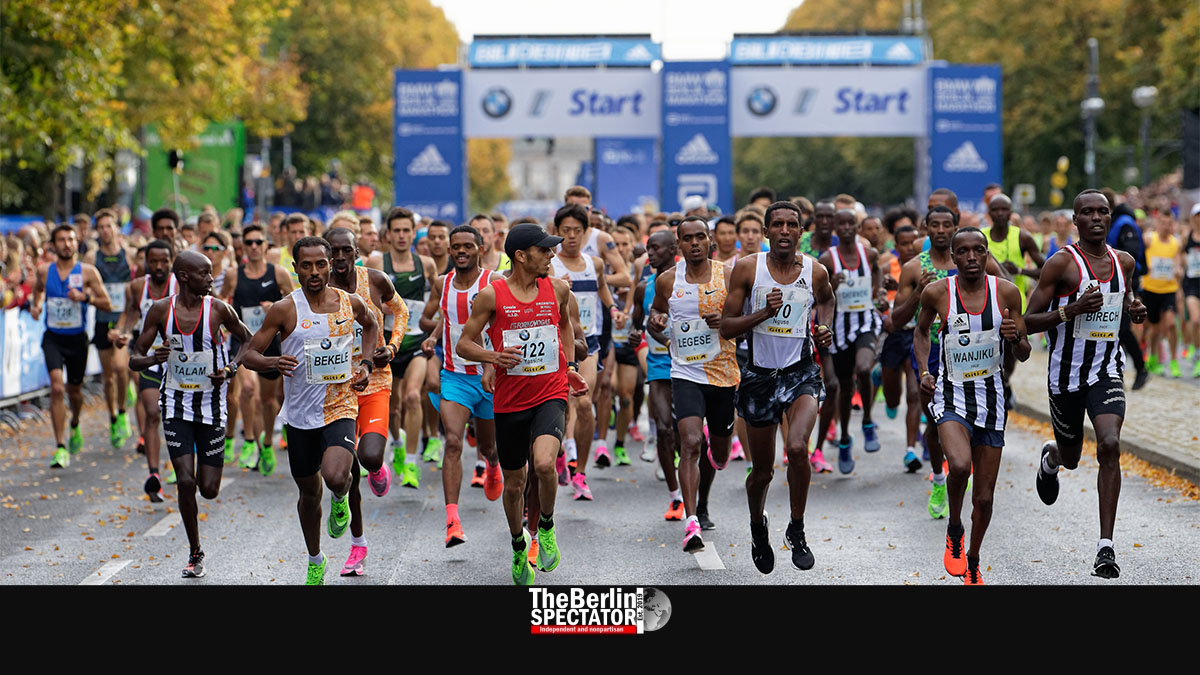 On Sunday, 45,000 people will take part in the Berlin Marathon. Even more Berliners and visitors are expected to root for the runners. The excitement level is on the rise already. Traffic restrictions have to be expected during the entire weekend.

Berlin, September 21st, 2022 (The Berlin Spectator) — Sound the Marathon alarm! There are several ground rules. First of all, let those runners run and don’t get knocked down by them. They have the right of way. Secondly, don’t expect to be able to drive in Berlin. Almost the entire city will be closed to motorized traffic. Thirdly: Don’t even think you can win. There is good news too: This edition of the Berlin Marathon will not coincide with elections.

Four days ahead of the big event, there already are streets closures in Berlin. Part of Strasse des 17. Juni has been blocked to motorized traffic since Monday. Today, this closure is supposed to be extended. On Sunday, more than 45,000 sweating runners from 150 countries are expected to populate the streets of the German capital. They will include the best of the best.

The American runner Keira d’Amato and her Kenyan colleague Nancy Jelagat Meto will be overtaking you within milliseconds after the starting shot was fired, if you are a participant. So will her compatriot Eliud Kipchoge and the Ethiopian master Guye Adola who won last year’s Berlin Marathon. Watch your rear-view mirror.

From Strasse des 17. Juni, these four front runners and their 44,996 competitors are supposed to head towards the Victory Column and Ernst Reuter Platz square before they take a sharp right towards Moabit. Hey! Do not run in the wrong direction! Via the Chancellery and Central Station, the thousands of participants will be going to Friedrichshain, Kreuzberg and Neukölln before they head back to Kreuzberg at Hasenheide.

At this point, many participants will probably want to give up while others might still be in the process of warming up. Schöneberg, Steglitz and Charlottenburg are next. From there, everyone needs to run back to Mitte, which used to be East Berlin’s city center. Then, simply pass Brandenburg Gate and you are done. Easy as pie, right? While the handbikers and wheel chair riders will be starting before 9:00 a.m., the runners are supposed to get going from 9:15 a.m. in four waves. On Saturday, events for children and the Breakfast Run are scheduled to take place at former Tempelhof Airport.

Motorists should either leave their vehicles on the parking lot or get out of the city beforehand, as long as they still can. Even as a pedestrian or cyclist, crossing the Berlin Marathon route will be difficult. The organizers say people should go for the underpasses at ‘U-Bahn’ train stations to get through.

According to the BVG, Berlin’s main public transport provider, as many as 40 tram and bus lines will either be rerouted, interrupted, shortened or split. This also applies to the buses that serve as replacement transport for the U9 line. Yes, the replacement needs to be replaced, so to speak. Who needs some more good news? Here it is: If you are a participant, your Marathon number serves as a public transport ticket for Berlin’s zones A and B as well as Brandenburg’s zone C from September 22nd to 25th, 2022.

Related column: The Berlin Perspective: How to Lose the Berlin Marathon